As a huge Harry Potter fan having the chance to visit the Wizarding World of Harry Potter at Universal Studios and Islands of Adventure was a dream come true.

I am a big fan of Warner brother Studio Tour the Making of Harry Potter and have visited three times this year for the opening of Platform nine and three-quarters, the launch of the Summer Sweets and Treats event and for the Hogwarts in the Snow VIP evening. Each time I go I see something else that I have missed on previous visits and I feel that the Wizarding World of Harry Potter would be exactly the same.

There was no way that I could have absorbed all of the details that were put into making this magical place and I wish I could have spent a whole day just in these areas exploring each and every shop and casting all of the spells and enchantments which make magic happen. Here I have broken down the two areas that you will find in Universal Studios and Islands of Adventure as well as the train journey on the Hogwarts Express that takes you between the two. I can’t choose which area is my favourite one but I know for sure I definitely want to go back for more.

Walking along the streets of London, past 12 Grimmauld place, where you might catch a glimpse of Kreacher in one of the windows and after a quick chat with Stan Shunpike and Dre Head at the Knight Bus you could be mistaken to think that the fronts of the buildings were not hiding a magical place. Walking behind the wall of the Leaky Cauldron would only have been made better if you actually had to walk through the pub itself but with the sound of the bricks opening in front of you and the sights that greet you as you turn the corner into Diagon Alley, it almost takes your breath away. Or as Alison said “WOW”. With the entrance to the Leaky Cauldron restaurant to your left followed by a dark and dreary alley that is only meant for dark wizards you really are transported out of the theme park and into a whole new adventure. The shops that line Diagon Alley are open for business and sell more Harry Potter merchandise that I actually believed existed and you could literally buy robes in the Quidditch supply shop, Fanged Frisbees and Pygmy Puffs in Weasleys Wizarding Wheezes and most importantly Wands from Ollivanders ( or Gregorovitchs which was just around the corner).

Stopping at the wand shops are a must for any wizard (or muggle) for as you know the wand chooses the wizard and with the special interactive wands only available at Universal Studios and Islands of Adventure (around $50), you really do need to make this one of your first purchases. You may have seen a few young (and young at heart) wizards wand waving along Diagon Alley but fear not the Ministry will not be carting them away for the use of magic by underage wizards. Special charms are in place around the Wizarding World of Harry Potter that allows holders of the special interactive wands, to practice their magic in safe surroundings and on objects that have been chosen to cause no harm to fellow visitors although a few may get wet occasionally.

Taking pride of place at the end of Diagon Alley is Gringotts bank where the Dragon breathes fire to scare back those who come too close and where the queue is worth visiting even if your kids are too small to ride. A ride through Gringotts was as thrilling and entertaining as you could imagine and one that we would like to ride again and again.

Although we are not lovers of the dark arts we did take a wander through Knockturn Alley and into Borgin and Burkes where I managed to get myself Slytherins Mothers Locket as an early Christmas present. The dark artefacts that were on sale were amazing to behold and would turn many a wizard to the dark arts with all of the temptations. 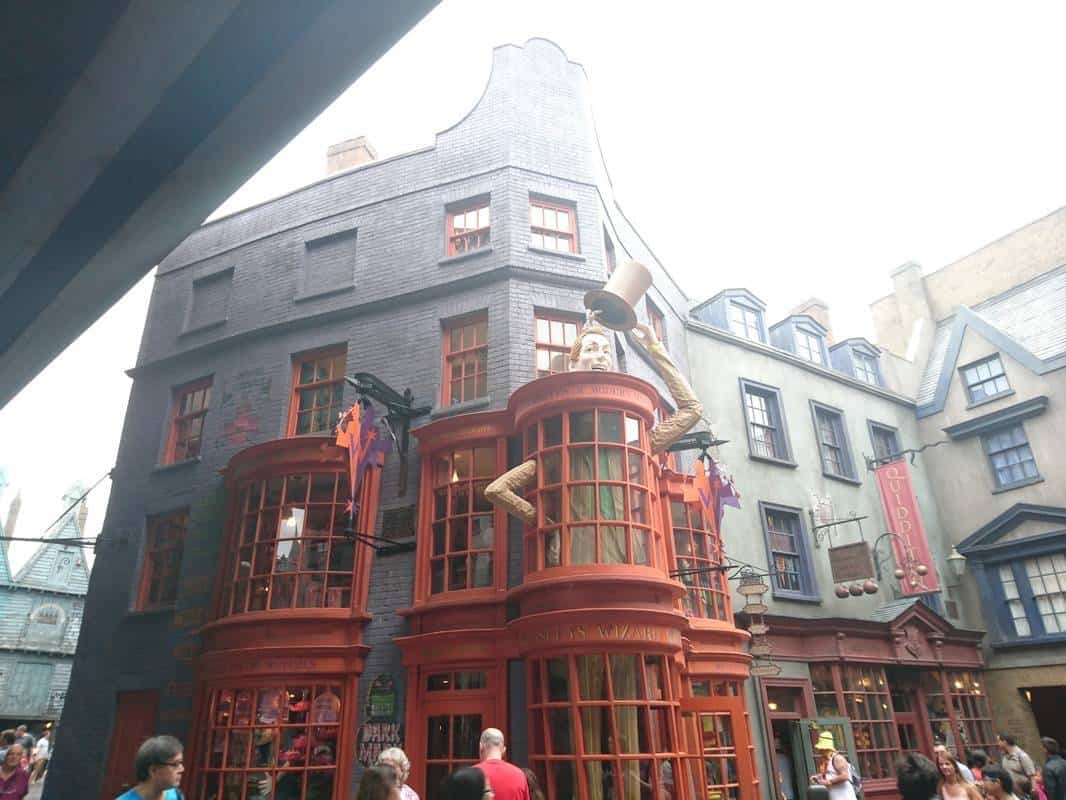 We sampled the food at the leaky cauldron, drank Butterbeer in three different ways (Frozen, Cold, and Hot) as well as tried the special ales and beers brewed just for the Wizarding World.

Leaving Diagon Alley behind us as we walked into Kings Cross to catch the Hogwarts Express across to Hogsmeade we could not have prepared ourselves for this enchanting journey. Travelling between London and Hogsmeade or Hogsmeade and London makes a difference to the experience you will have and we travelled both ways. With video screens that look so much like real windows that you forget that you are watching them and with characters moving around in the corridors, you really do feel emersed in the experience of being on the Hogwarts Express and the journey passes in no time at all.

Hogsmeade and the Hogwarts Castle was amazing to see but as it wasn’t hidden away like Diagon alley I didn’t feel as immersed in the magic, however, the bright blue skies, snowy rooftops and the frog choir singing in the background really were amazing to see. In this area we got to eat at the Three Broomsticks, ride the Hippogriff and experience the wonders of Hogwarts Castle where the queue itself is almost as magical as the ride. Unfortunately, the kids were too short for the duelling dragon ride so we will have to leave that for a different year but we still had so much fun choosing sweets from Honeydukes and enjoyed looking at all of the items in Filch’s emporium of confiscated goods. The Hogwarts the forbidden journey was our best ride throughout all the parks that we visited in Florida and in fact I think that it may even be our best ride ever and it would certainly take some beating. Unlike other rides,  it uses a variety of effects that will have your senses confused and your heart racing as you go on an adventure through the castle, the grounds and the forbidden forest but watch out for the dragon because he looks hungry.