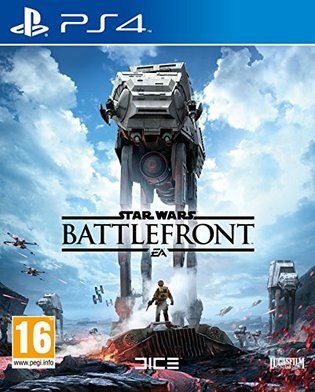 The whole world seems to be going Star Wars crazy at the moment, which is probably down to the growing anticipation of the new film due out on the 17th December.  With all this craziness comes tie-ins for toys, food, product placements, clothing merchandise, basically you name it and the marketing team will try to morph it into a storm trooper’s helmet.  Even if you’re not an avid fan, the power of the Star Wars franchise is too strong to resist.  Being drip fed trailers on YouTube for The Force Awakens has only brought those around me to absolute fever pitch, but if  like me you’re one of those people who takes a fair interest in anything pop culture, you’re likely to have felt strong movements in the force.

A few weeks ago I had the privilege of playing Star Wars on Disney Infinity 3.0, which offered the ability to play with many famous location from the films over the years.  EA’s reboot of the popular Battlefront gaming series (from the PS2 era) is therefore following suit by tapping in to the excitement only the release of a new Star Wars film can generate.  The game’s settings are based on the original movie trilogy, so if you’re an older Star Wars fan this is going to be right up your street. 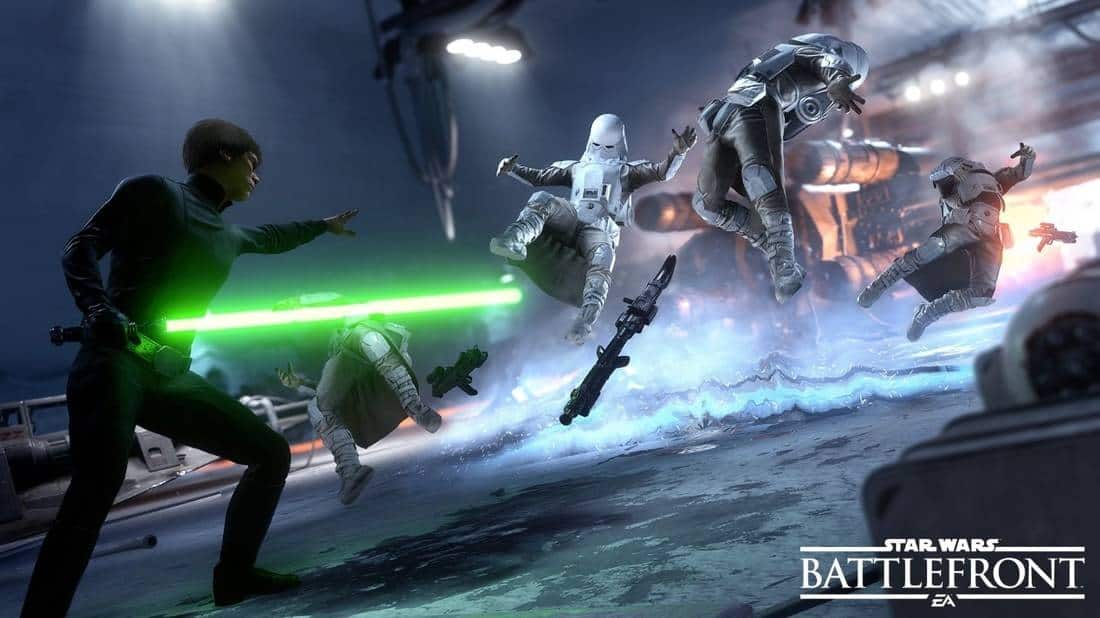 What’s the game about?

Star Wars Battlefront has a big emphasis for online multiplayer, which the majority of people will know has proved to be a very popular outlet for video games over the last 10 years.  The developers have lots of experience in making these types of games, as they previously created the Battlefield series (one of the biggest rivals to Call of Duty).  The same mechanics have been transferred over to Star Wars Battlefront, so you can be sure that the online multiplayer aspect has been tried and tested.  There are Massive 20v20 player matches available to  take part in, which are crammed full of amazing  detail and something that has not been seen in any previous Star Wars video games.  It’s easy to see why this is the best looking Star Wars video game ever created, as the developers were given complete access to the vaults of Lucasfilms.  Also, it would be difficult find few online multiplayer games that give a grand sense to the proceedings like Battlefront.  There are nine online game modes to choose from – Supremacy (spread over fives zones), Fighter Squadron, Walker Assault and Survival Mode.

The game also includes an offline portion, which allows players to take on tutorial missions alone or local co-op play (yes, 2 kids can play on the same TV at the same time!).  Unfortunately, the game is devoid of a story based campaign, which kinda sours the relationship somewhat however, once you’re recreating famous scenes from the films, such as storming the Rebel base on Hoth in an AT-AT, or riding a speeder bike through the forests of Endor, you soon forget all about that lack of a story. 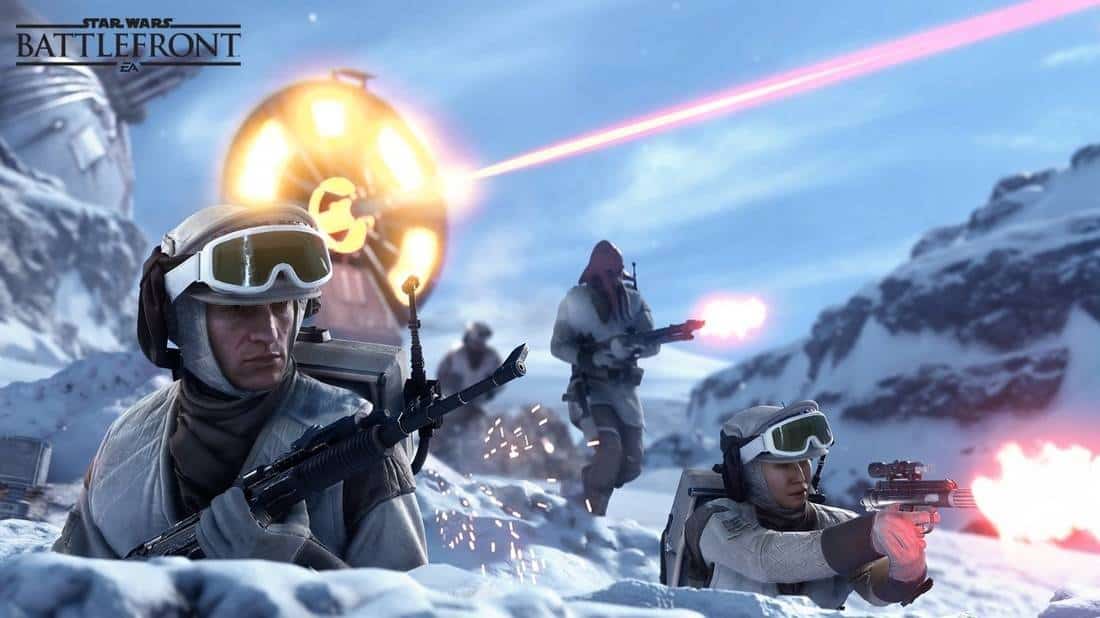 How does it play?

The good thing about the game is that it can be played in both first and third person  view, so it will appeal to those who are constantly playing Call of Duty or Grand Theft Auto.  The controls are simple to pick up and even easier to master.  Also, I’ve that at times the game can be quite forgiving when in the middle of a battle and your character is being peppered with laser blast.  Unfortunately there’s only 5 planet maps to explore at present (Hoth, Tatooine, Endor, Sullust and Jakku), but there is talk about releasing more maps based on different locations as DLC.  There’s even news available now that confirms owners of the game will receive a free map download that based on a location from the new film, The Force Awakens.

When navigating the world you can use a variety of vehicles for both land and air.  The most famous vehicles of course are AT-ATs, speeder bikes, X-wings, TIE fighters and of course…the Millennium Falcon!  Players can also customise and upgrade their weapons, gear and abilities by earning xp and completing in-game challengers.  You can choose to play as either a Rebel Alliance soldier or an Imperial Stormtrooper, as well as some of the more notable characters such as Darth Vader, Luke Skywalker, Boba Fett, Leia Organa, Han Solo and Emperor Palpatine, 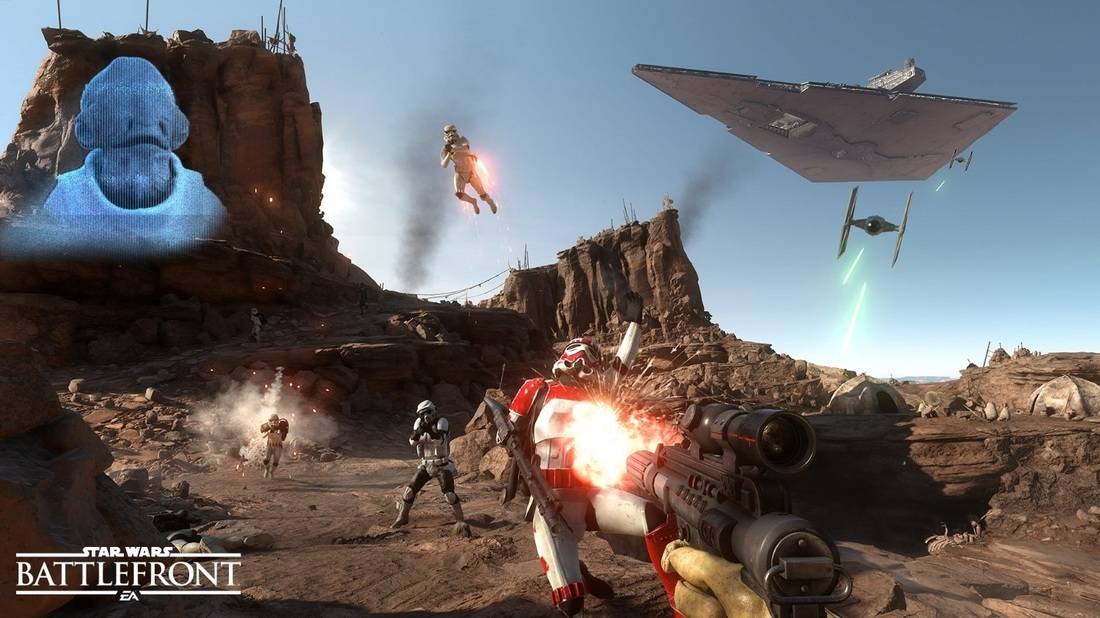 There’s no denying that Star Wars: Battlefront is a magical recreation of everything we love about the original Star Wars films.  Every section of the game just makes you feel all nostalgic.  So if you’re a long time fan of the series, then this is the perfect game for you.  Unfortunately casual fans and avid gamers are going to feel a  bit short changed with the lack of content on offer.  In about 10-15 hours of playing the game you will have exhausted every aspect the game has to offer.  Not to worry though, just keep playing in the epic online battles and you will feel that the Force is strong with this one.

Star Wars: Battlefront is available for PS4, Xbox One and PC, with the game only going for around £40.00.  There’s also plenty of bundles to buy that come with strategy guides, special gold and Darth Vader inspired controllers and steel cases.  The game also has DLC available to purchase via Season Pass at £39.99, which entitles you to the 4 planned expansion packs coming out over the next year.  Lastly, there’s even a limited edition Darth Vader PS4, which comes with the Darth Vader inspired DualShock 4 controller, plus the memory is expanded to 1 TB.

The game has a PEGI 16 rating and is likely to be appreciated by those of an older generation.  Younger gamer will get more from the Star Wars playsets of Disney Infinity 3.0,