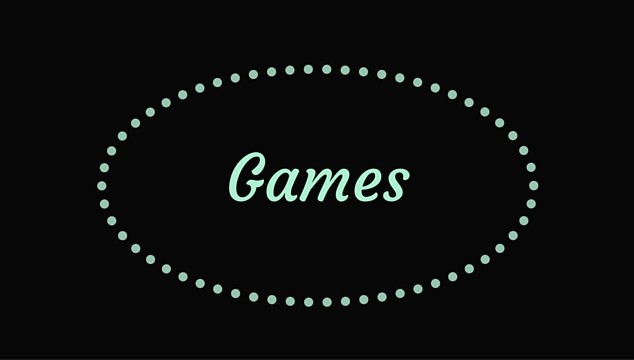 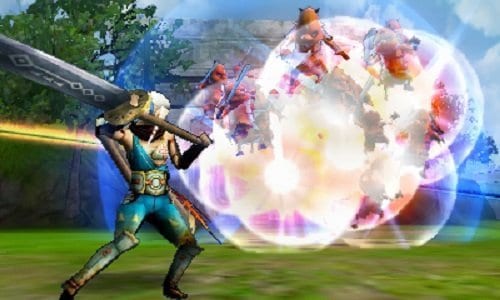 Hyrule Warriors is a game that has already seen a release on the Nintendo Wii U, so the question is why bring it out for the handheld 3DS? And will it transfer well enough over to a small games system?  Whilst the Wii U is a great games system, the sales figures reveal that it’s not doing well in comparison to previous homes consoles.  Nintendo has therefore decided that with such a huge amount of people owning the 3DS handheld system, it would be ideal to give this awesome game a chance to be appreciated by more people.  Also, despite only being released for the Wii U 2 years ago, the technology behind the game means that transition to handheld has not affected gameplay too much.
Before I go into detail about the highlights of this title, it’s worth sharing my initial experience with the game.  After downloading it to my “new” 3DS, I decided to have a first go whilst catching the bus to work.  I suddenly found myself so engrossed in the game that when I looked up to see if I was any nearer to work, I’d missed my stop completely and had to back track in order to make it into the office on time.  The same scenario nearly happened again when catching the bus home that day.
Hyrule Warriors is best described as an old school hack-and-slash action game.  The plot is your expected evil villain tries to take over the kingdom of Hyrule and you the player get to control different characters from the Zelda universe, trying to defeat large armies in large battlefield area.  In addition, the enemies will sometimes have a larger boss character to defeat, but if you identify their weaknesses and keep wielding your sword, you’re definitely going to progress to the next mission. 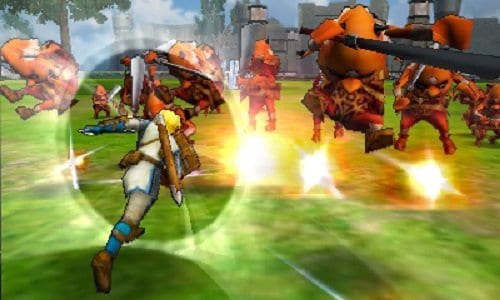 What’s pleasing to see with this port is that any previously released DLC for the Wii U version is free on the 3DS.  There are some new features for the 3DS that wasn’t there before, such as being able to switch between multiple characters using the touch screen.  The developers have also added  2 new chapters to the story mode, one involving the female version of Link (Linkle) and another involving the toon characters from The Legend of Zelda: Wind Waker.  These new characters can be transferred to the Wii U version using a special download code supplied in the game’s case.  Lastly, the Adventure Mode “My Fairy” system allows players to nurture their own pet fairies, who serve as companions in the battlefield. 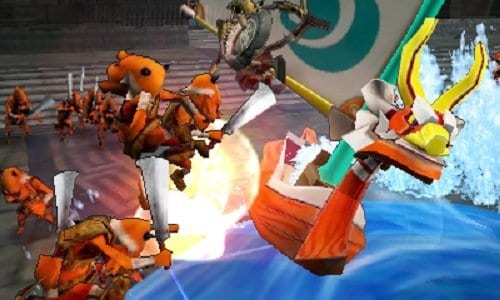 Due to all the extra content in comparison to it’s Wii U counterpart, it’s hard to find a reason for not purchasing this game for yours or your child’s game collection.  Once you’ve destroyed enough enemies and gained enough collectibles, there’s a crafting system to upgrade your weapons and potions through the creation of badges.  Unlocking better combos and defences becomes an essential part of the game the more you progress through the chapters.  Weapons can be combined with empty slots that allow you to mix and match attributes, giving further immersion and customisation to the experience.

For gamers this is a simple idea that should become very old, very quickly, however, it never does.  This is testament to the fact that I was late for work on my first play.  The amount of Zelda content for hardcore fans is unbelievable.  The plot visits scenes from the Ocarina of Time, Twilight Princess and Skyword Sword, so nostalgia is a strong feeling for older players.  It doesn’t matter though if you new to the series, as this is very much a game that is accessible to all ages and abilities.  It’s also every bit as good as the original and probably the current best game out for the 3DS.

Hyrule Warriors Legends is available from all good online retailers and most high street shops, with a recommended retail price of £30.00.  The game is also available for download from the Nintendo eShop.