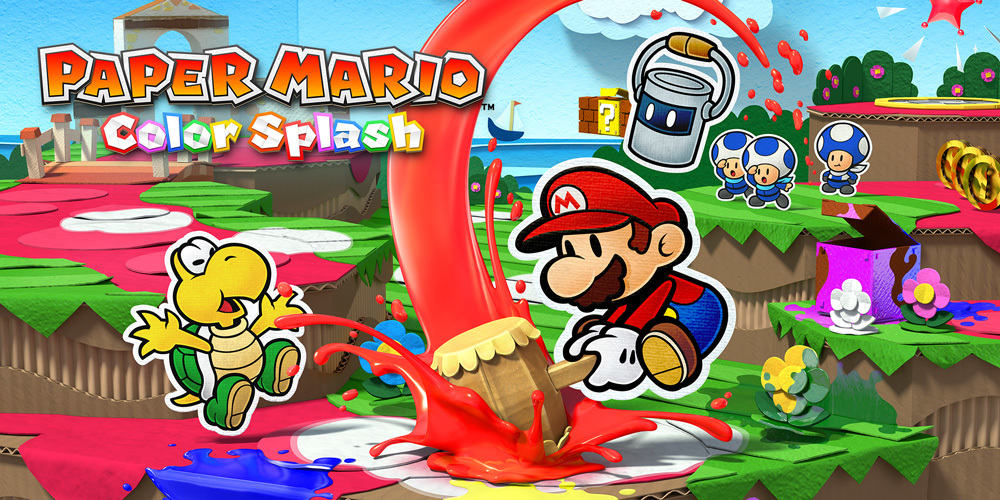 In this latest Paper Mario game, players take on the role of Mario as he investigates the mysterious disappearance of Prism Island’s Big Paint Stars. 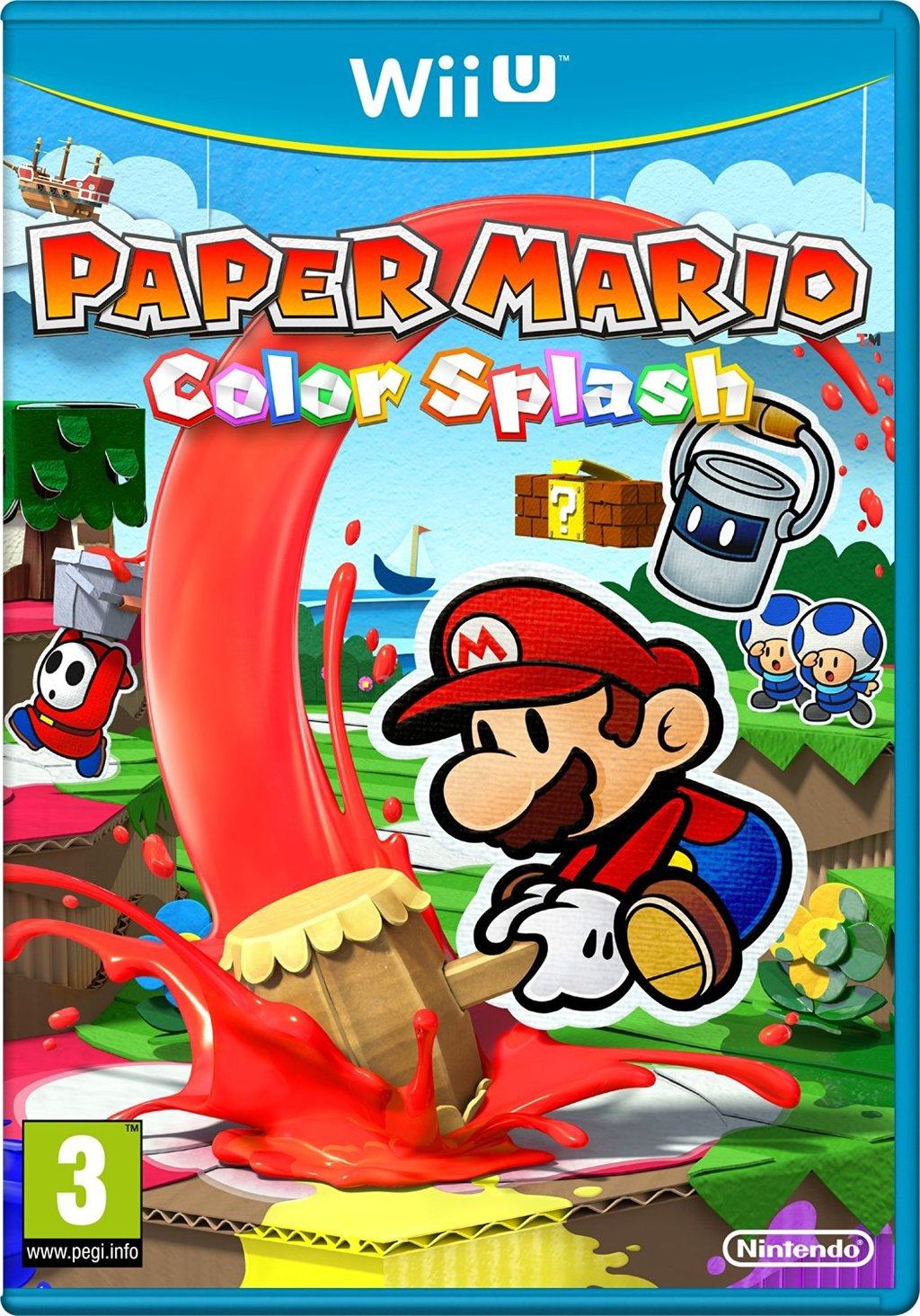 Following receipt of a blank postcard from Prism Island, Mario, Princess Peach and Toad decide to take a boat trip and see what is the reason for the postcard being sent in the first place.  Upon arrival, they discover the local town is missing a lot of its residents and blotches of color have been erased from most buildings.  After an attack on Toad by a Shy Guy, who tries drinking the paint from paper Toad, Mario & co befriend a talking paint can called Huey.  The group are informed that the Big Paint Stars have been stolen from the town’s fountain and are asked if they can help recover the island’s source of life. 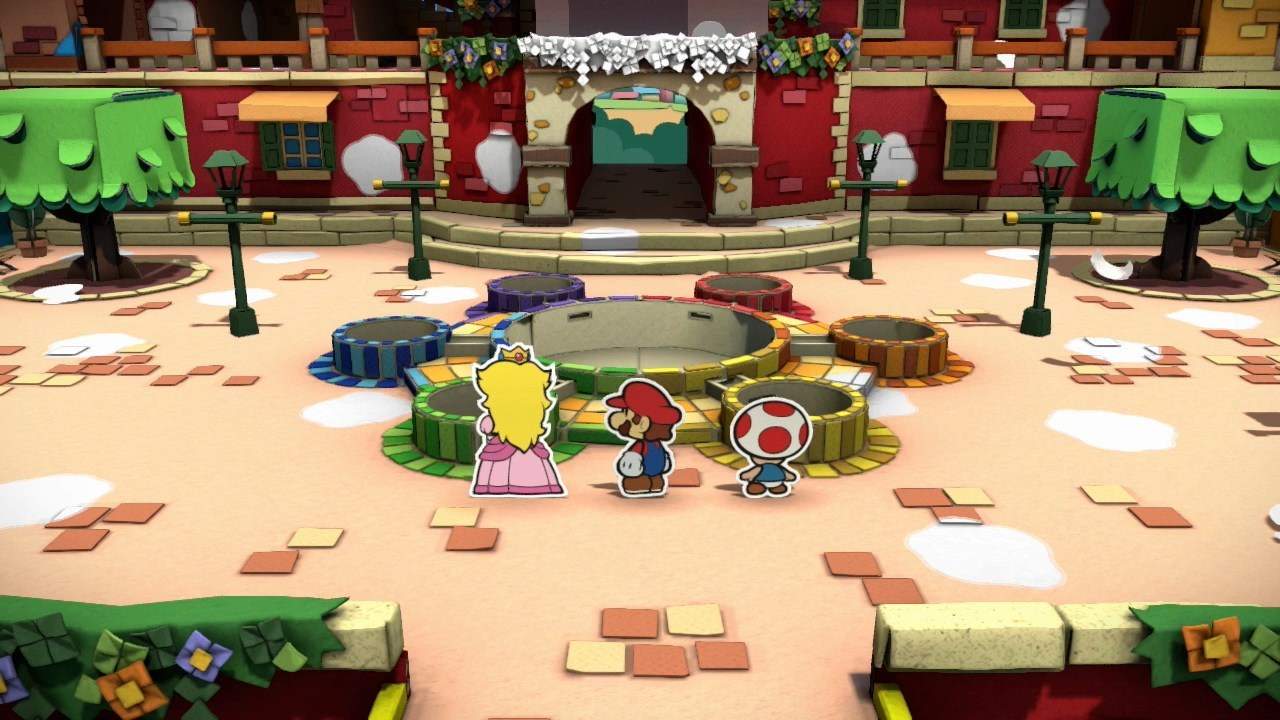 Nintendo fans looking for a new first party title on their Wii U should look no further than Paper Mario: Color Splash.  Even though Paper Mario is a series of games stretching back to the Nintendo 64, this is my first play of this particular franchise.  If I was going to highlight one aspect of the game, it would be the visuals.  Recent Nintendo games on the 3DS and Wii U, such as Yoshi’s New Island or Kirby and the Rainbow Paintbrush, have excelled in mimicking the artistic material used in game.  Color Splash is another one of those great examples, if not the best of the lot!  Interacting with an entire world made of paper in full high definition, there’s nothing currently out that matches the games warmth and charm.
Mario still has his trusty hammer from previous adventures, however, in-keeping with the game’s title, Huey the talking paint pot upgrades the hammer to spill paint every time it’s wielded by the player.  This helps restore colour and creates a sense of addiction to fill all the missing sections in each of the levels, which goes some way to completing the game’s side quests.  Unfortunately, the paint hammer isn’t without its limits, as the main display shows a level meter for red, blue and yellow paint.  You can restore your hammer’s paint levels by smashing interactive items throughout the course.
The combat system takes on a more pedestrian pace compared to other Mario games, I say that because you defeat enemies in a turn based card system.  When playing these sections, the kids found it a lot easier than the traditional timed jump onto an enemy’s head, however, I found it a balancing act, as cards only have a one-time use (you can find/earn more during level exploration) and adding color to the cards depletes your paint hammer’s reserves.  Cards come in a variety of attacks, from one boot jumps to big hammer smashes, and the unusual Piggy Bank or Bottle Opener.  When it’s the enemy’s turn you will be blocking their attacks by pushing the A button when prompted.
There are no spoken words in this game, so players will have to be patient and read all the dialogue.  For me this something that strengthens the experience and makes the overall story more immersive.  Even though this isn’t the platformer or kart racer I’m used to, I did find this to be like a good book, difficult to put down.  You could basically surmise the game’s plot based on common knowledge about other Mario games.  Bowser steals the item or person that is precious and Mario must navigate multiple worlds, solving numerous puzzles and defeating bosses to put things how they used to be.
Paper Mario Color Splash is a game that’s easy to pick up and becomes quite formulaic following completion of the first level.  This should appeal to those players who enjoy being a completionist and improving their characters abilities over many hours playing through the story.  The games is out now and available from most game retailers, including Amazon for £38.00, and the Nintendo eShop for digit download.