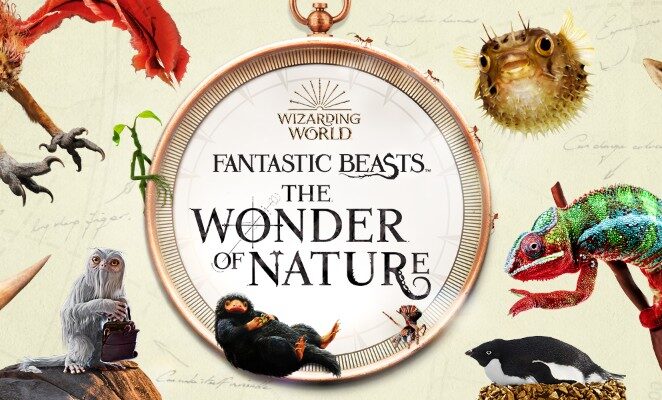 As a huge fan of the Wizarding World, I was very excited to receive an invitation to visit the Fantastic Beasts: The Wonder of Nature exhibition at the Natural History Museum in London. A mix of props from the Fantastic Beasts films, information about the animals from the Wizarding World, and examples of unusual creatures from the real world, the exhibition managed to merge them all with interactive elements, special effects, and amazing theming.

This dinosaur skeleton found in 2004 was later named by scientists as Dracorex Hogwartsia which translates to Dragon King of Hogwarts a fitting start to the exhibition as it shows the cross-over between the Wizarding world and the real world.

The exhibition featured various beasts from the Wizarding world and looked at their origin within lore and how real creatures were mistaken for other creatures. They look at dragons, sea monsters, and mermaids among others.

The mermaid section included the window from the prefect’s bathroom as well as the egg that had to be opened underwater in the goblet of Fire. It looked at hoaxes and creatures that were previously mistaken for mermaids like manatees.

The sections include some great interactive elements such as doors to open to listen to sounds of the egg, jewels that allow you to interact with Niffler, and even some Erumpent musk that activates a large screen where an Erumpent comes to see you. The Mooncows become visible when the moon rises and disappear as it gets dark.

The mix between film props and museum exhibits alongside the fantastic scenery in the area makes this is a must-visit place for fans of the wizarding world. I don’t want to share too much so as not to spoil it but you only have until the 3rd January 2022 to go see it.

To find out more about the exhibit and to book tickets visit https://www.nhm.ac.uk/visit/exhibitions/fantastic-beasts-the-wonder-of-nature.html