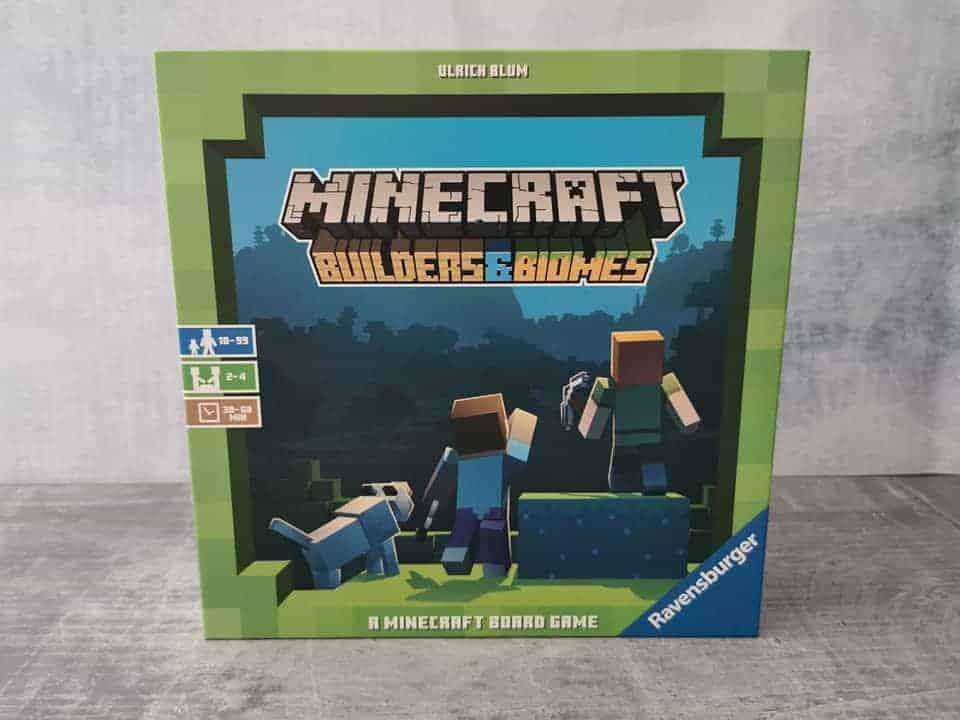 If you have a child who loves Minecraft but you are looking to reduce their screen time then I think I have the answer for you. I was first introduced to Minecraft Builders and Biomes in January at the London Toy Fair. I knew that it was a game that my daughter Alison would love. This strategic game where players explore the Overworld, mine blocks and build structures and biomes to gain points. You also need to collect weapons and defeat mobs! Minecraft Builders and Biomes is suitable for 2 to 4 players and is recommended for ages 10 plus as there is an element of strategy involved but you can play with younger children as there is a variant in the rules for beginners. 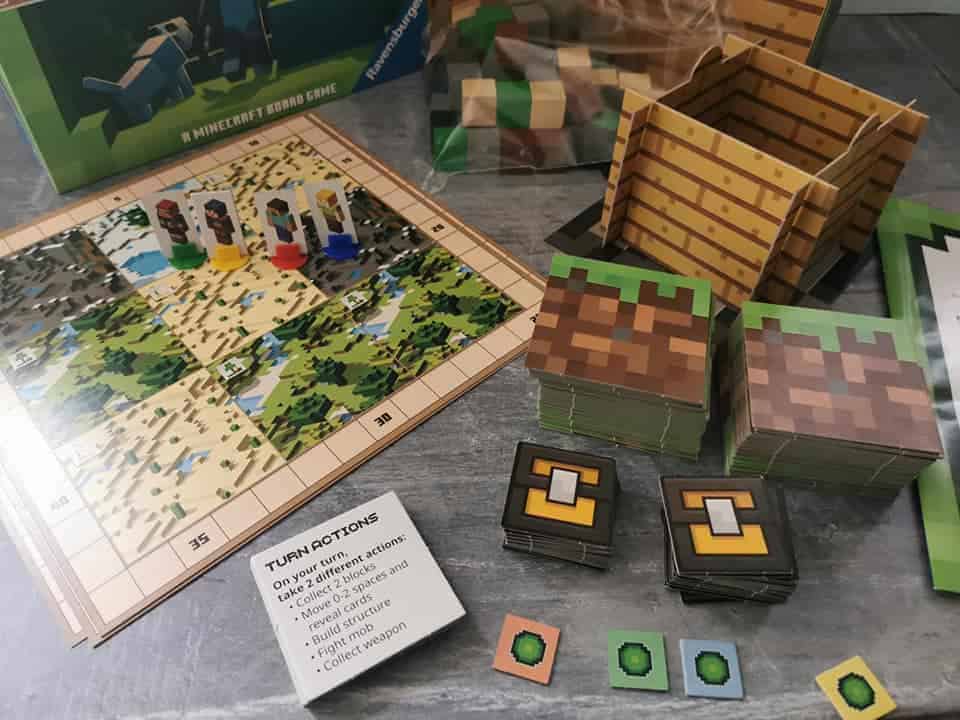 The grass times feature your buildings, biomes and mobs. These make up the playing board as shown in a picture below. The cards feature different icons that help you with the scoring.

The top-left icon on these cards shows the type (as does the background) you use Biomes in the first scoring round. In the second scoring round you use the second icon down, this is the building round. The buildings can be made from Wood, Sand, Stone or Obsidian. The third round is the type of building with decoration, dwelling, animal house or bridge.

The bottom left of the biome cards shows the cost to buy the card. Rarer, higher-scoring cards will cost more.

To fight a mob you use your weapon cards. You turn over the top three cards and if you have enough hearts then you defeat the mob. Some mobs help you during play such as giving you an extra action (those with a food symbol) and some cards help you at the end of the game (those with sand timers a number and a biome type). 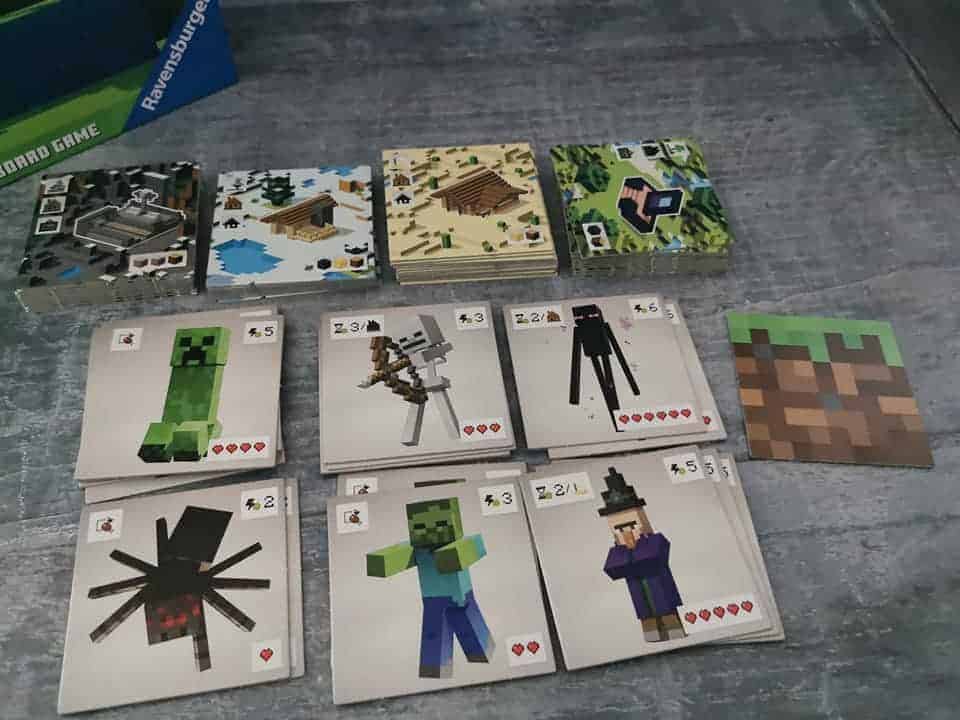 The chest cards are placed around the edges of the board made with the grass cards. You remove the ones with the coloured backgrounds and just use the 16 weapons with white backgrounds. Some of the weapons have special abilities such as taking an addition weapon token, gaining experience points, collecting a block or detonating the TNT. You get to keep all the weapons cards you collect apart from the TNT which once detonated needs to be returned to the box. 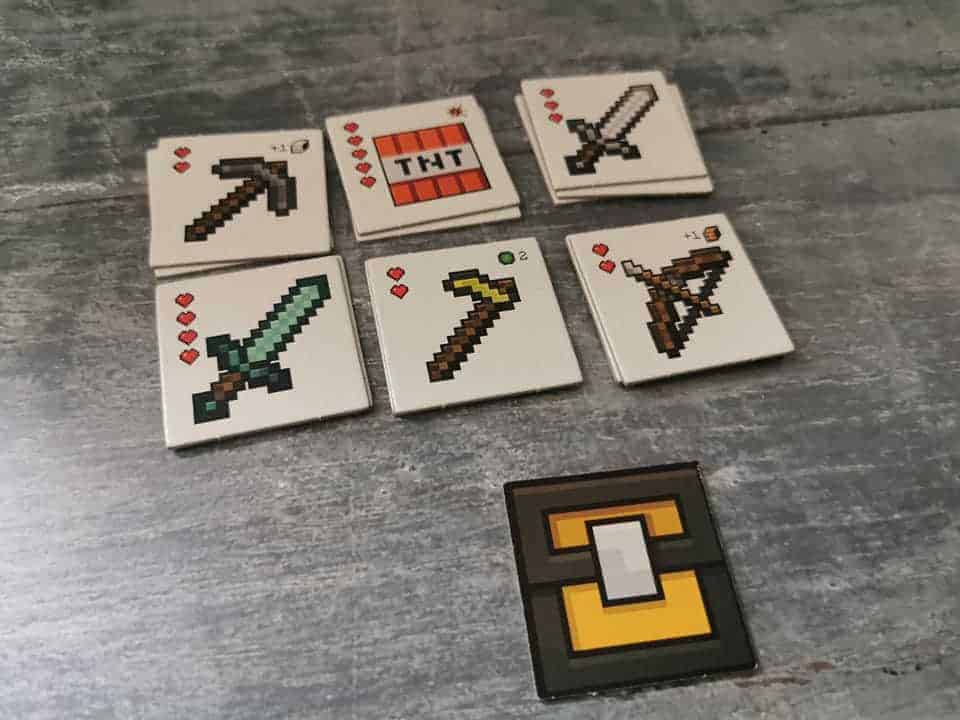 The blocks are formed into a big cube using the block base and the support structure. Fill the structure with the blocks at random. The 64 blocks are made up of 16 wood, 14 sand, 12 stone, 10 Obsidian and 12 emerald blocks. Gently shake until they form the cube and then remove the structure support. 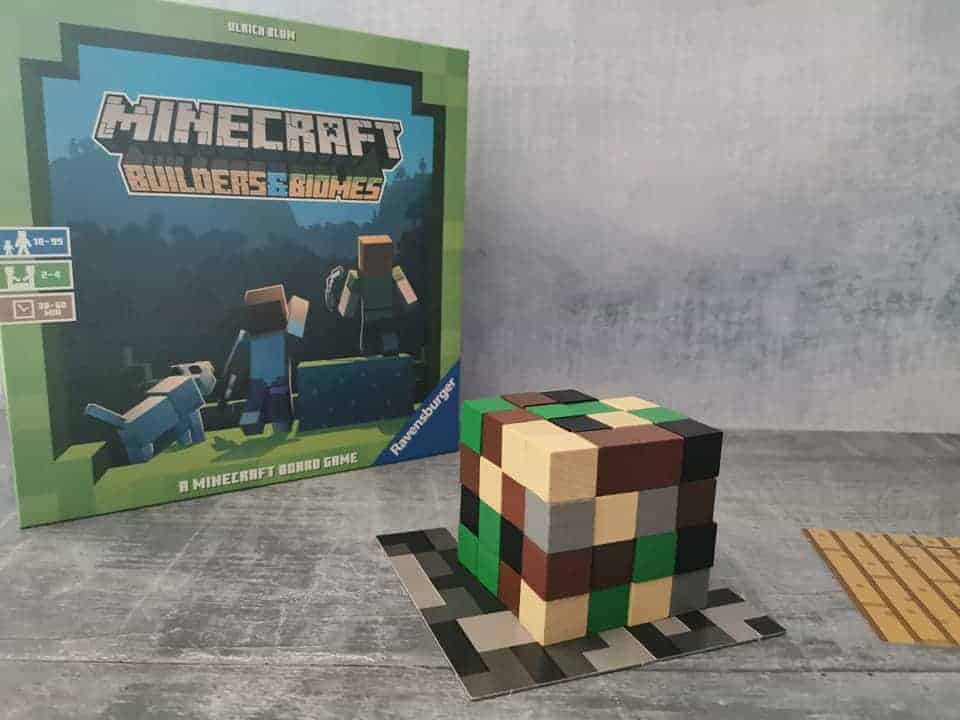 To get started you need a player board which has your point counter around the edge and then a variety of biome squares for you to fill in. You will need your game piece base with player skin token inserted (you can create your own skin on the blank cards),  you also get an experience counter for adding up your points and 5 coloured weapons cards that match your character base colour. Your weapons cards include 3 poison potatoes which have no effect when battling mobs. 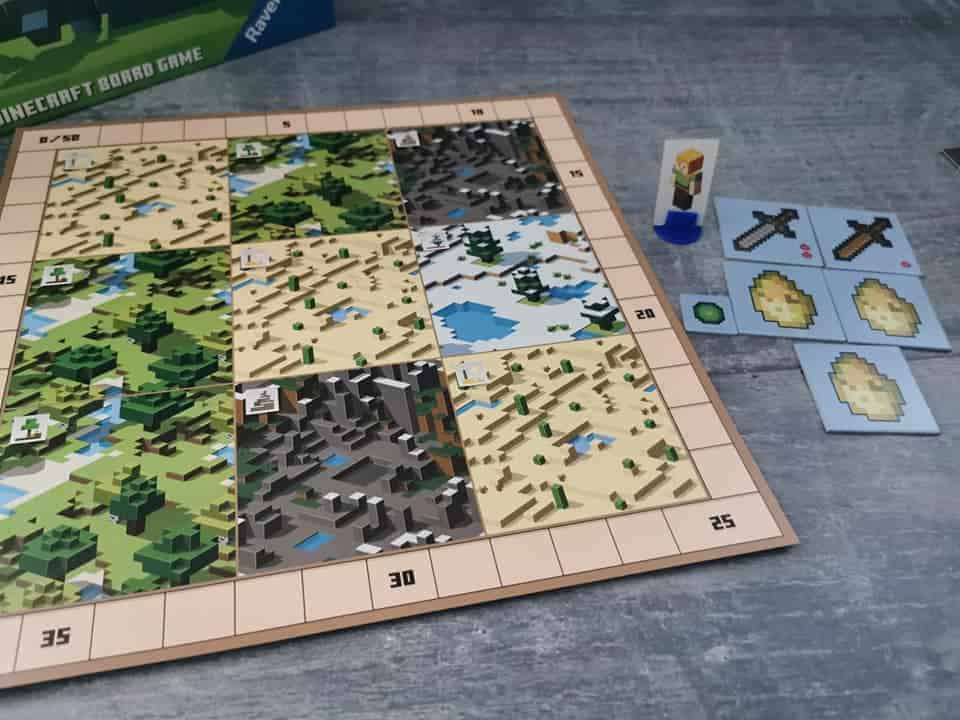 To set up the game ready to play layout the 64 grass tokens as below in a 4 x 4 grid with 4 tokens on each space. You then need to place the weapons chests around the edge. Make sure there is enough space to move your playing piece between the cards. Please your character tokens in the middle of this area. 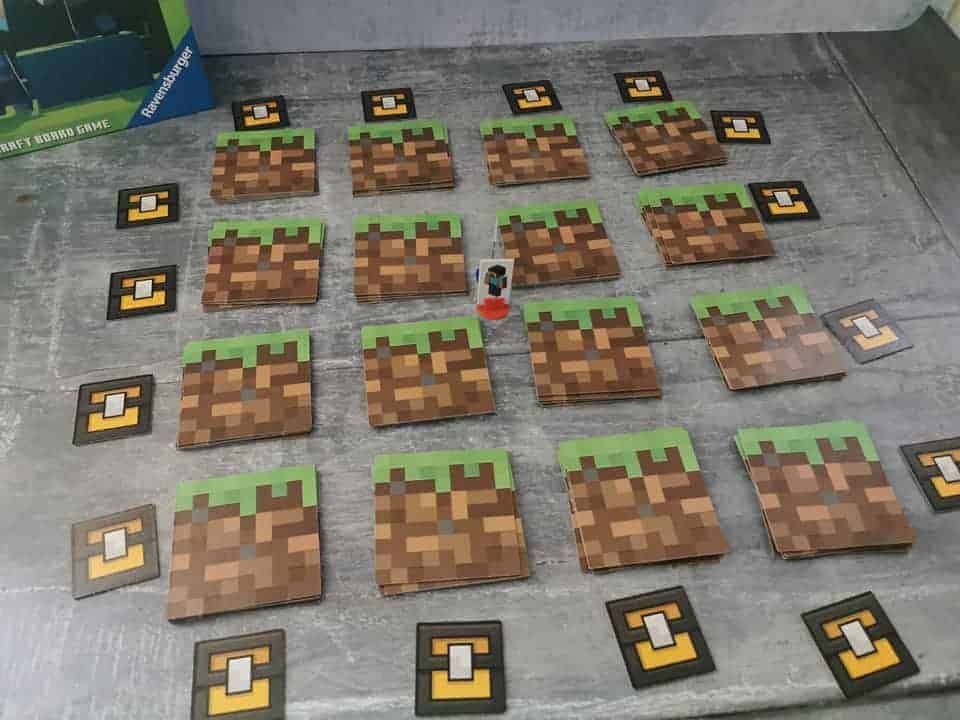 Place a turn action card and one of each of the scoring cards so that everyone can see them. On your turn, you get to do two of the 5 actions listed on the cards. You can choose which actions to perform. When you move around the board you turn over all of the cards at your cross-section so this is a good first action. YOu can then decide what to do based on the cards you turned over.  To build a structure you must have the right amount and colour of blocks (with emerald being a wild card that can be used for any block). 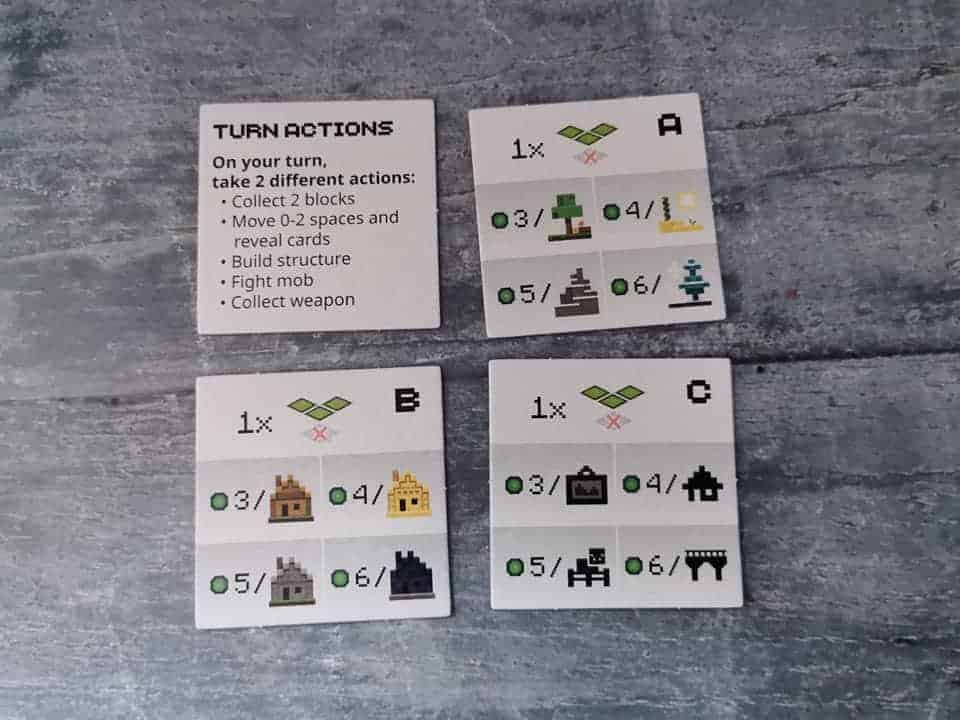 When you are scoring each round you look for the option that will allow you to gain the most points. The options must be next to each other and can not be diagonal. This could mean that you actually count your 3 Snowy Tundras (6 points each x 3 = 18) instead of 5 forest biomes (3 points each x 5 = 15) because you will get more points. You use the experience points around the edge of your playing board to keep score. After all three rounds, you then need to add any mob scoring.

If you are playing with beginners then there is a simplified scoring method where you count all spaces instead of just ones that are connected. This variant works well with the normal scoring so younger children scoring using the simplified method but older players use the standard method.

Minecraft Builders and Biomes is a great game that taught me more about Minecraft than I ever wanted to know but it was really fun playing it and don’t tell the kids but there are lots of educational benefits as well! From doing mathematics working out scores or defeating mobs to problem-solving and strategy this is one of those games we should definitely be promoting to our kids and they will love you for it.