Skip to content
Nintendo’s new home console has been out since the 3rd of March and our family were one of the first to get our hands on one.  Now, I know that this review is coming out a month after the console’s release, but it has been difficult to tear myself away from playing Zelda: Breath of the Wild.  Being an avid YouTube viewer, I couldn’t escape the hype building up to the Switch’s release.  It was becoming quite tiresome hearing grown adults dissecting and analysing the likely success of Nintendo’s next console.  Now it’s here we should choose to embrace a unique take on gaming, one that advocates portability in an age of smartphones and tablets.
Unboxing & Setup
It’s immediately noticeable just how small the overall box is compared to the PS4 & Xbox One, but you’ll soon understand why when all the contents are laid out.  In the box, you’ll find the main body of the console (looks like a tablet), left and right Joy-cons, a controller grip (for a more traditional experience), 2 detachable straps for your joy-cons, the dock for TV play, a USB power adapter and an HDMI cable.  That may sound like a lot for starters, so it’s worth getting to know each component before trying one of the three ways to game.
Console TV Mode – It’s worth highlighting that when connecting the included dock to your TV, you realise just how little the dock is contributing to the performance of the console.  I’d always thought that when docked, the Switch would be working in tandem with more components to increase power to something on a par with PS4 and Xbox One.  However, the dock is more plastic casing that genuine circuitry, acting purely as an HDMI converter for gaming on modern smart TVs.  The dock has a port for your HDMI cable, power socket and a USB 3.0  You’ll note just how seamless the docking process can be, with only a couple of seconds delay before the images are displayed on the big screen.  The only drawback is fiddling with the removal of the Joy-Cons (there’s a small black button under the trigger buttons), which always disturbs the dock connection, so you’ll see the Switch briefly changing between displays while you fight to get the Joy-Cons free. One way round this is to remove the Joy-cons before docking. 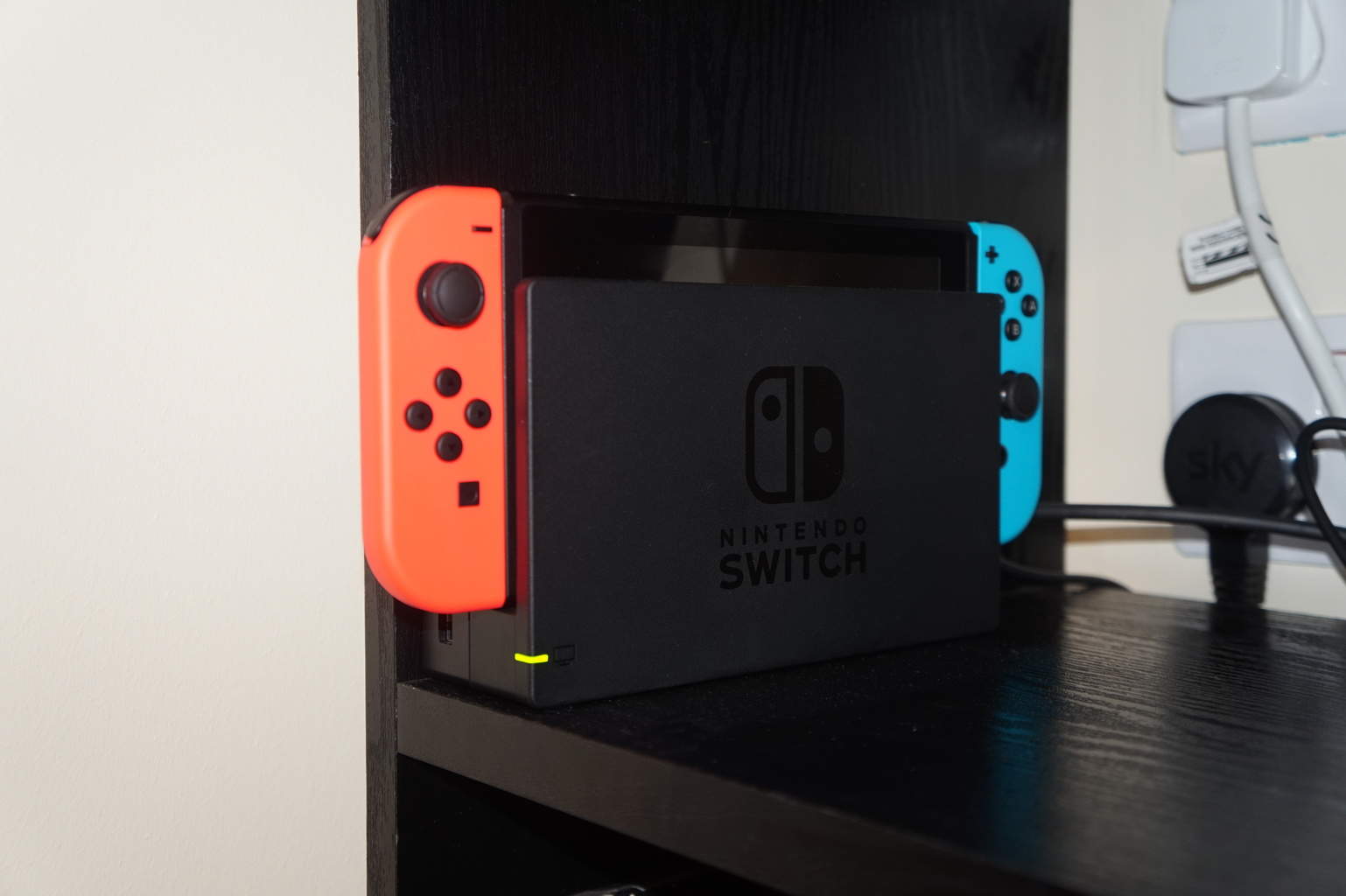 Handheld Mode – This is the mode that feels the best out of the three, purely because it allows you can get comfy anywhere and game.  Once you slide the Joy-Cons onto either side of the Switch, the end result is something similar to the Wii U gamepad, albeit heavier in weight and much slimmer.  Games look and feel just the same as when they’re displayed on TV, if not better due to the smaller screen.  Along the top, you’ll find the headphone jack to further immerse yourself, the game cartridge slot and the volume/power buttons, which most people will be familiar with from their smartphones and tablets. 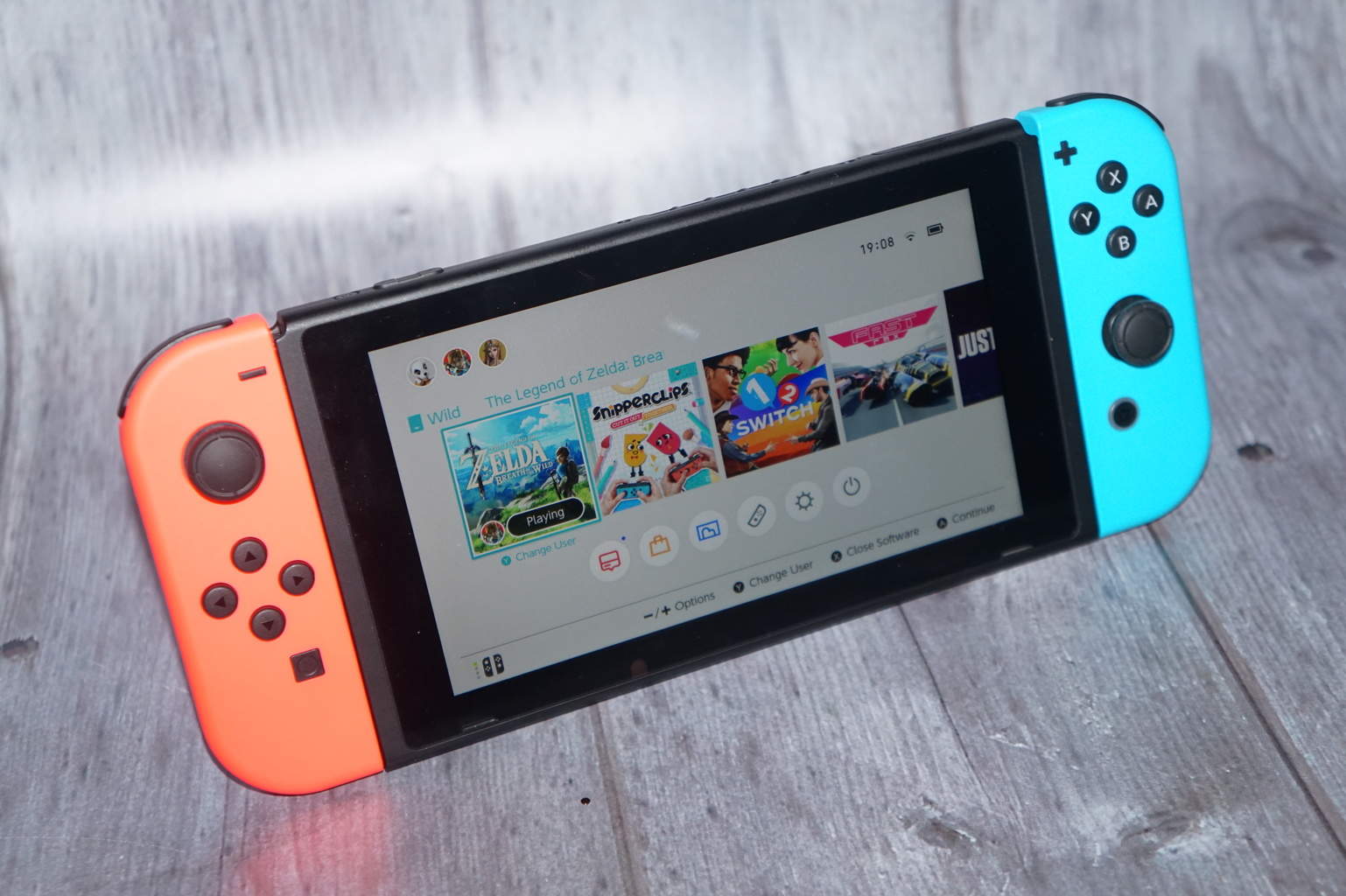 Tabletop Mode – I’m guessing Switch owners won’t use this feature as much as the other two, however, it will see some action whilst travelling, workplaces and on holidays.  Using the kickstand and Joy-Cons detached means 2 players can game anywhere.  This should be amazing when Mario Kart and Super Smash Bros. get released.  The only downside to this feature is the kickstand being placed on one side, so any sudden movements could knock the Switch over.
Controller
I’ll just get the negative out the way first and admit that my big man hands are not suited to the joy-cons’ ergonomics.  Whether it be playing as a handheld or inserting the controllers into the dedicated grip, I notice my hands regularly getting gamer cramp.  In the hands of children, well my girls don’t seem to be experiencing this problem. 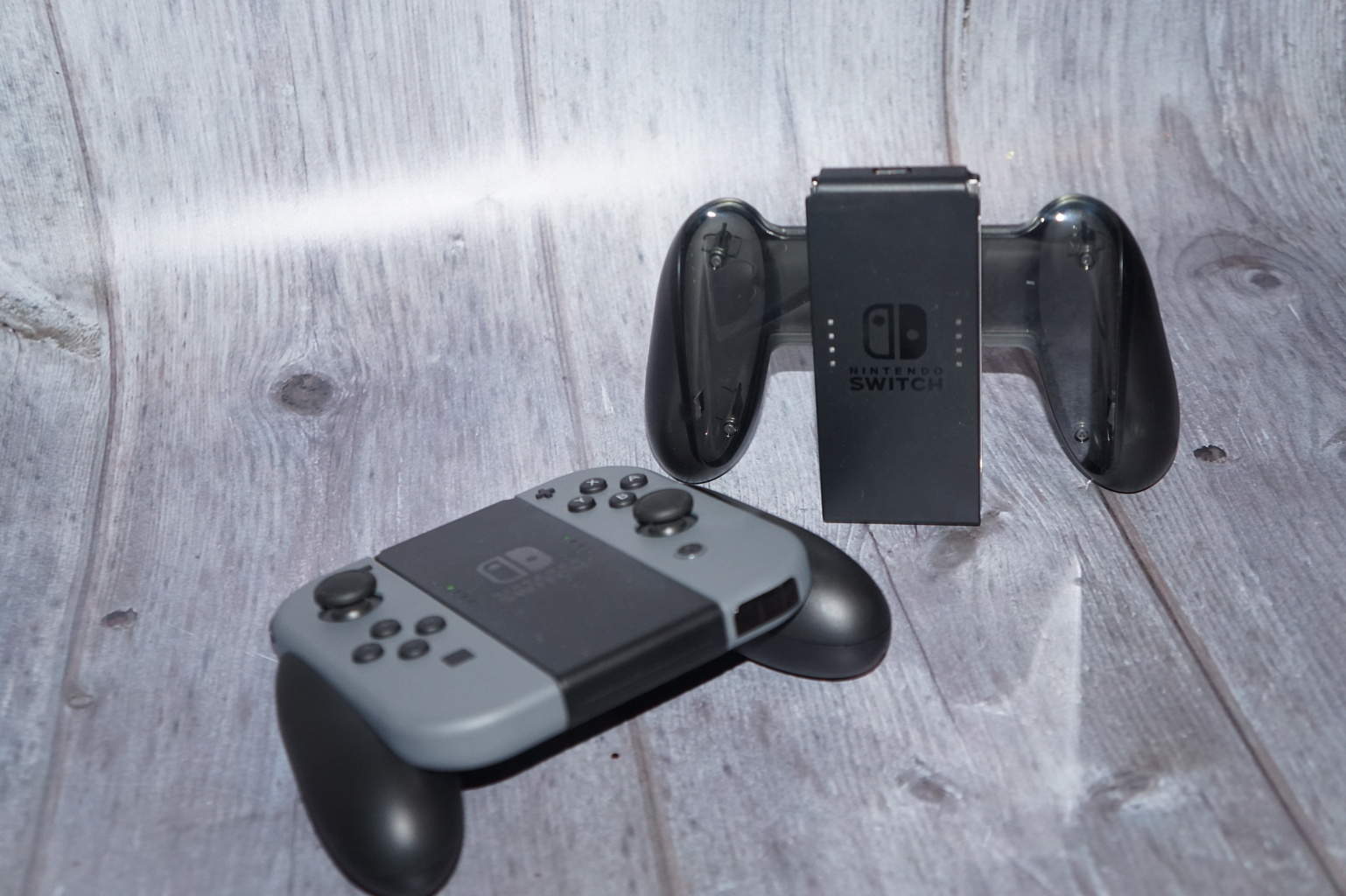 The Switch joy-cons can be used in a number of ways – utilising the grip accessory to become one gamepad, as 2 individual controllers (for both 1 and 2 players experiences) or slotted onto the side of the console for the handheld mode. 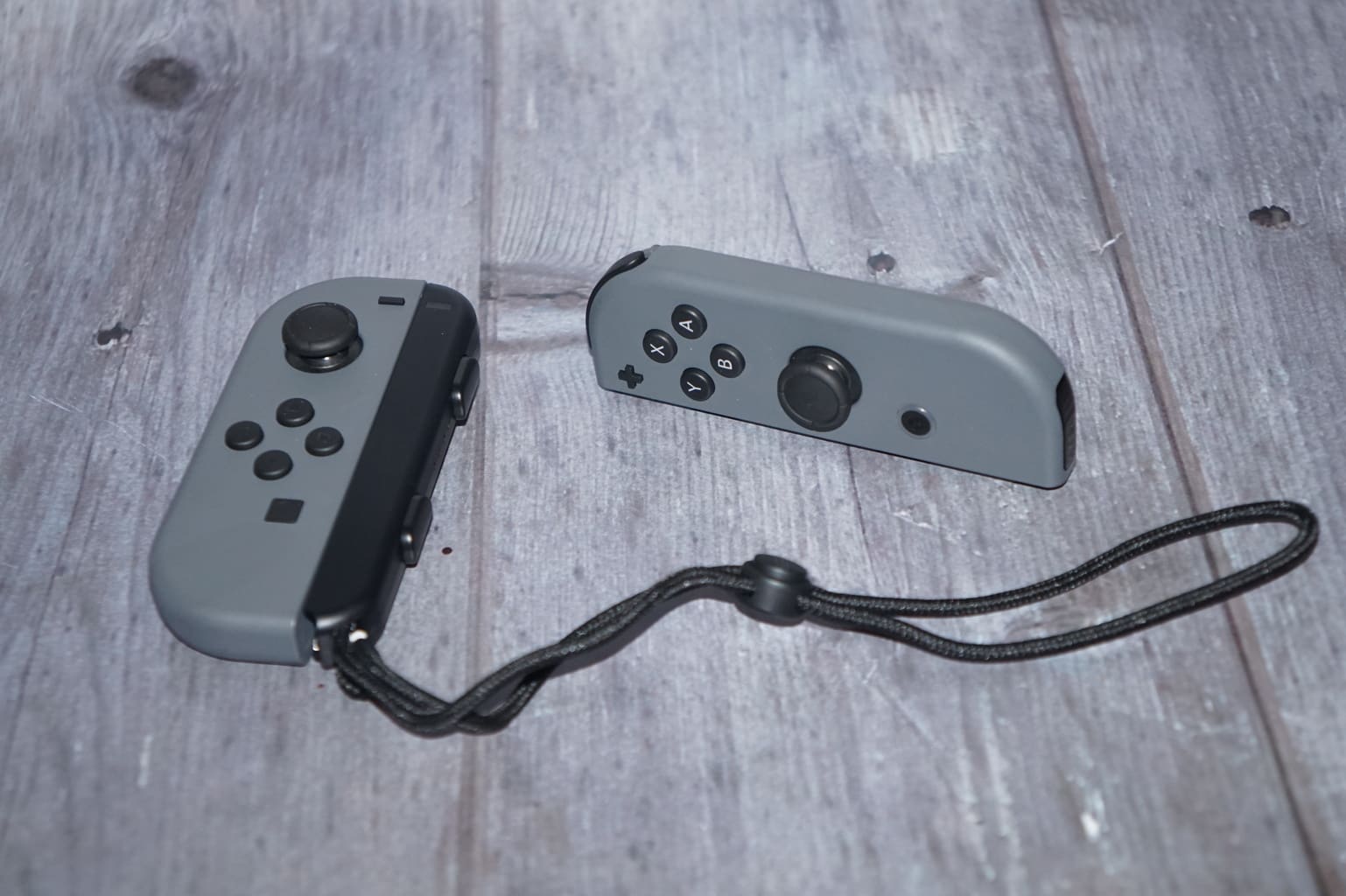 The much publicised ‘HD Rumble’ is the best rumble feature I’ve ever come across in a game controller.  If you’re looking to get the most from these controllers right now, then look no further than 1-2-Switch.  It’s a collection of mini-games showcasing the best features the joy-cons have to offer.  Out of the 28 games, Ball Count is the best at providing the ‘wow’ moment for HD Rumble.  Using precise vibrations in the joy-con, it feels like little ball bearings are moving around inside the controller.  Your job is to guess how many balls there are using the sense of touch.
The left Joy-Con is where you’ll find the screen-shot button, a handy little feature for sharing photos on Twitter and Facebook.  Alternatively, you can build a photo album for a playthrough of your favourite game and look back with fond memories.  I’ve already started my Zelda album and have some gems in the bag.  The right Joy-Con houses the home button and amiibo NFC connectivity (yes the Switch supports amiibo functionality).  This feature comes in very useful for Zelda by unlocking weapons and outfits.
All of the above features are also found in the Switch’s Pro controller, something I absolutely want for long sessions playing Zelda, however, can’t justify the current retail price of £60.00.
Depending on the controller set-up, you’re gonna have to ensure the controllers are configured correctly.  Fortunately, Nintendo has a dedicated option in the user interface for such an occasion and all you have to do is follow the on-screen instructions.
Battery Life
They say that taking the Switch out and about and playing a graphically demanding game (such as Zelda) will drain the battery in approximately 2 1/2 hours.  We’re yet to experience using the Switch away from the home (a carry case is sorely needed before trying this scenario), but playing in handheld mode on the sofa or in bed, the short battery life hasn’t been too much of a noticeable inconvenience.  You could even plug the supplied AC adapter directly into the screen’s bottom power port, allowing you to stay under the covers and carry on gaming in your pyjamas.
Storage
The Switch console comes with built-in storage of 32GB, which may be good for your iPhone or tablet, however, the OS will quickly devour 8GB of that space.  It’s likely that future updates will increase this amount and downloadable titles will also take their toll.  Straight away you’re gonna want to invest in a micro SD card, either 64GB or 128GB (depending on your budget), and you’ll find the slot on the back of the console underneath the kick stand.
Games
It’s disheartening to write that there are only 7 physical games to purchase at launch, with a few of those re-releases.  The 7 titles are Zelda: Breath of the Wild, 1-2-Switch, Snipperclips, Just Dance 2017, Super Bomberman R, Skylanders: Imaginators and Shovel Knight Treasure Trove.  Don’t be upset though as there are a few digital releases.  We’ve already purchased Fast RMX, a futuristic racing game that makes use of Nintendo’s online multiplayer service, which is free until later this year. 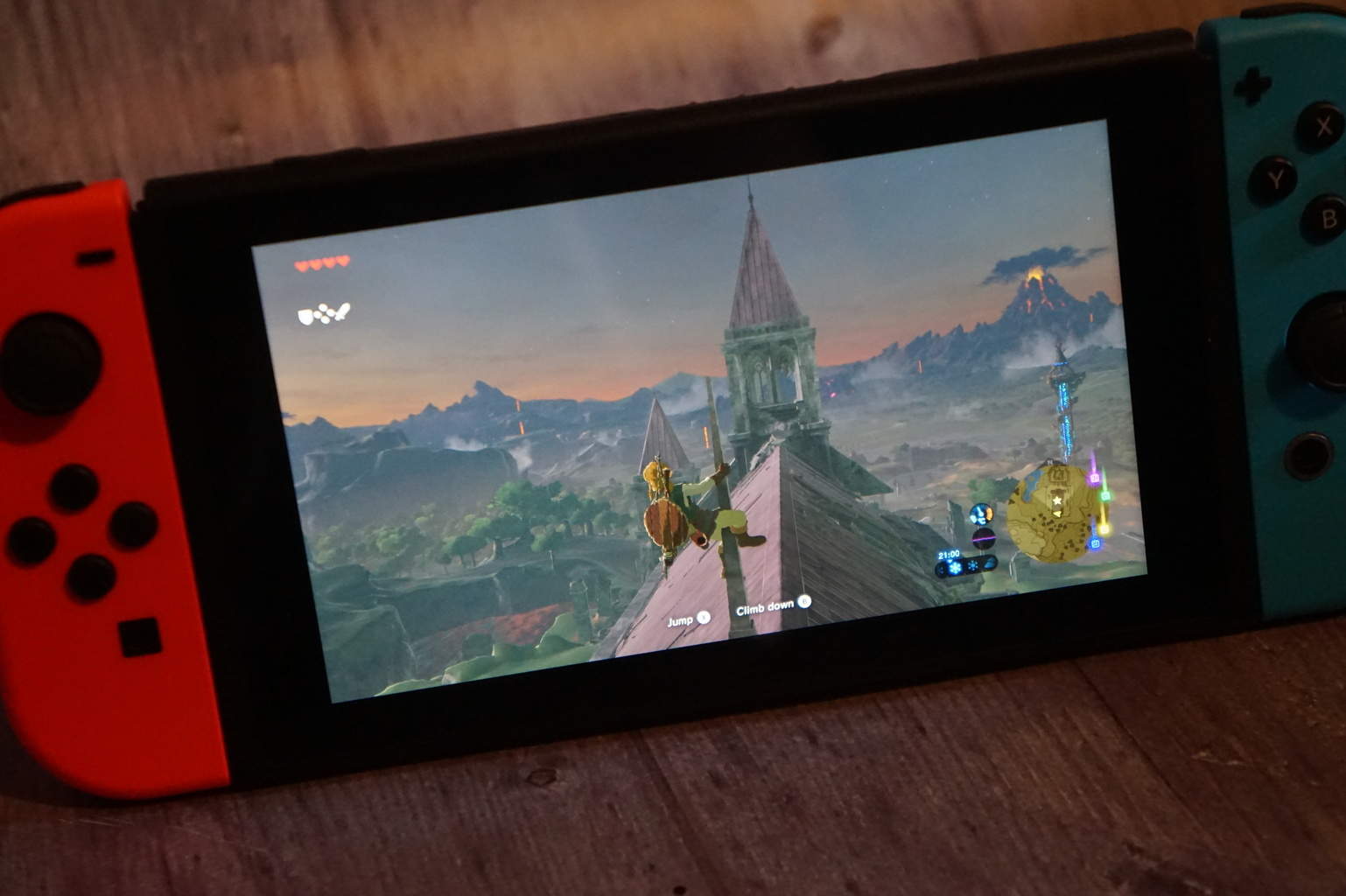 There are plenty more games confirmed for release before the end of 2017, with Mario Kart 8 Deluxe, ARMS and Lego City Undercover due out in April.  Scattered throughout the year are Splatoon 2, Skyrim, Fifa, Super Mario Odyssey, Xenoblade 2, PuyoPuyo Tetris and Fire Emblem Warriors.
However, what I’m hoping to see are lots of addictive and fun ‘indie’ games.  Short and reasonably priced games that are easy to pick up through the eShop.
Additional Accessories
The Joy-Con charging grip will set you back about £40.00 and has been created for those gamers who want to charge their Joy-Cons outside of the handheld/docked mode.  Given our family’s use of the switch so far, I wouldn’t say the charging grip is essential, especially given the high price point for the accessory.
I would definitely recommend investing in a protective screen cover and carry case, which can be found for around the £20 mark.  Nintendo has their own official version, but due to popular demand has already sold out of stock.  Well known peripheral maker HORI has some good quality alternatives.
Verdict
Essentially, because of its gaming capability, the Switch feels more like a laptop than a tablet.  The screen is bright and colourful, allowing big games like Zelda to feel at home in handheld mode.  Having a controller that doubles as two individual controllers is a nifty idea that should appeal to parents who have more than one child in the household.  I would advise that if you don’t have the money to purchase a Switch now, wait until just before Christmas when most video games and consoles see crazy price drops.