Get together with friends and Spin Master Games

Now that we have kids we don’t get to go out as much as we would like so getting together with friends at home is the ideal answer. Last weekend we hosted a special bloggers family get together at our house where we invited a couple of local bloggers and their families around for a games night thanks to Spin Master Games. We were sent a selection of games to try out and given a modest budget for catering to help us all have fun.

Although we invited more, we were joined by Karen from Grumpish Mum and Jenny from The Brick Castle as well as their partners and kids. As we live close to each other we have all met at previous events which meant our kids (and partners) were able to just get on with it and it is brilliant that they all get along really well.

Whilst us parents helped ourselves to a glass or two of something stronger than juice and started to tuck into the cheese and crackers (well, it is nearly Christmas), the kids (and my husband) started off with a classic, Spin Master Games Hedbanz. Hedbanz is a quick question game of “What Am I?” where you have between 2 and 6 players who all have a card held on their forehead by a plastic head band. Using a series of yes and no questions the players have to guess what they are as depicted by their card. They all had lots of fun and it was really great to see them playing so nicely together. 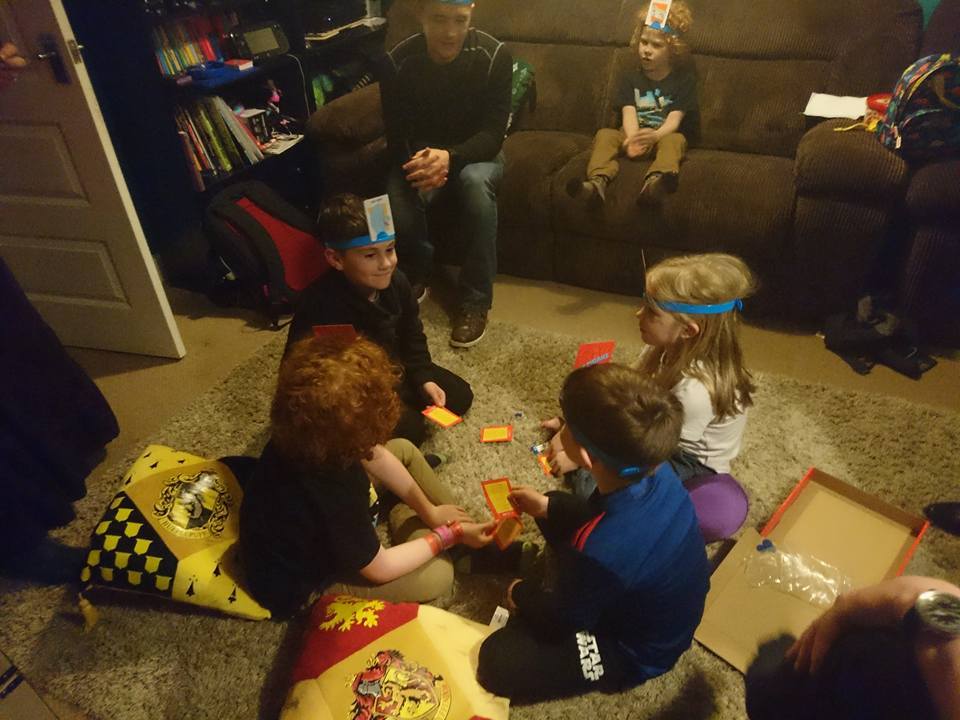 Once I had eaten my weight in cheese, and even shared some with our guests we decided to try one of the other game that we were sent. Opting for a game of skill we thought we would give Bellz a try and it is a good job we attempted this earlier in the evening when the alcohol consumption was still low because Bellz requires concentration and a steady hand. 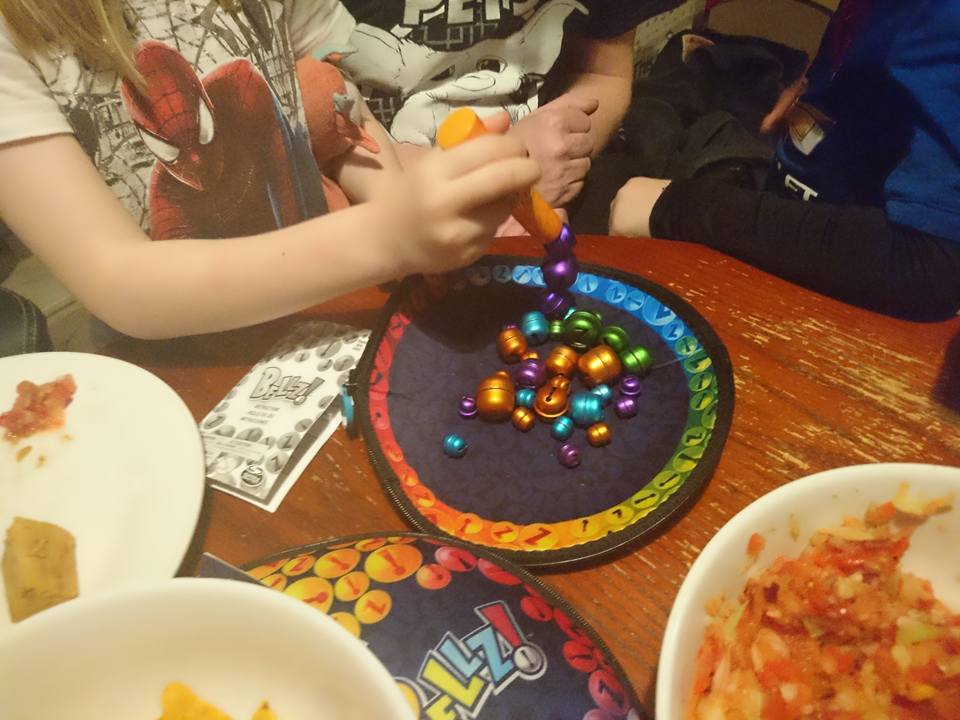 Bellz is a new game to the Spin Master Games range and the aim of the game is to take it in turns to collect your colour bells using the magnetic stick provided. However you can not pick up any other colour bell. The magnetic wand has two ends one of which has a stronger magnet than the other which can be useful for pulling bells apart before picking them up but once you have started to use one end then you have to use that end for the rest of your turn. On your go you can pick up as many bells of your colour as you can but you can not pick up bells of another colour or knock any bells out of the arena. If you do either of those things all of your bells from that go must be returned to the playing arena. This game sounds easy but those bells can be very tricky and it is definitely a case of not getting too greedy. Bellz was great fun and even the kids enjoyed this challenge.

At this point the kids decided to grab some food and head upstairs to watch a film whilst us grown ups set about to play The Game about Wikipedia: The online encyclopedia. Unfortunately, I was so engrossed in the game play that I failed to take any photos of this at all but that was only because it was such a great game. The box stated that the game was for two to four players but we decided to split into teams so there were 3 teams of two. We then just took it in turns to be the question master whilst the others answered (this did mean whoever was the partner of the question master had to answer the questions by themselves but this worked out fine). Each player (or team in our case) had a white board and a pen and the question master had a white board and pen too. The question master draws the top Wiki Theme card and proceeds to read all three of the games on the card. The Wiki Theme cards all have three games: Trivia, page views and Disambiguation.

Game 1 Trivia – There are three questions, the players write down their answers and they get a token at the end for each correct answer.

Game 2 Page Views – The players must place the three theme related topics in order of which ones received the most page views. Players take a token for each correct ranking.

Game 3 Disambiguation – Each player (including the reader) must write down their top 5 answers to the command on the Wiki theme card. Tokens are awarded for any answers that match the 5 written down by the reader (these do not necessarily have to be correct!). The reader also collects tokens for all answers guessed by the other players.

The game ends when all of the tokens have been used and teh winner is the one with the most tokens.

Now this game was lots of fun, especially the disambiguation round but it was also frustrating when you know the actual answers and the reader doesn’t have a clue. A prime example was the names of all of the Harry Potter films, this was a perfect question for me but unfortunately the reader didnt have a clue and I wasn’t going to guess Harry Potter and the really long walk in a cold forest any time soon. Which reminds me I really must add the Harry Potter books to their Christmas list although I won’t name any names.

We had so much fun playing The Game about Wikipedia that we realised we were running out of time so we quickly set up The Wave electronic game. 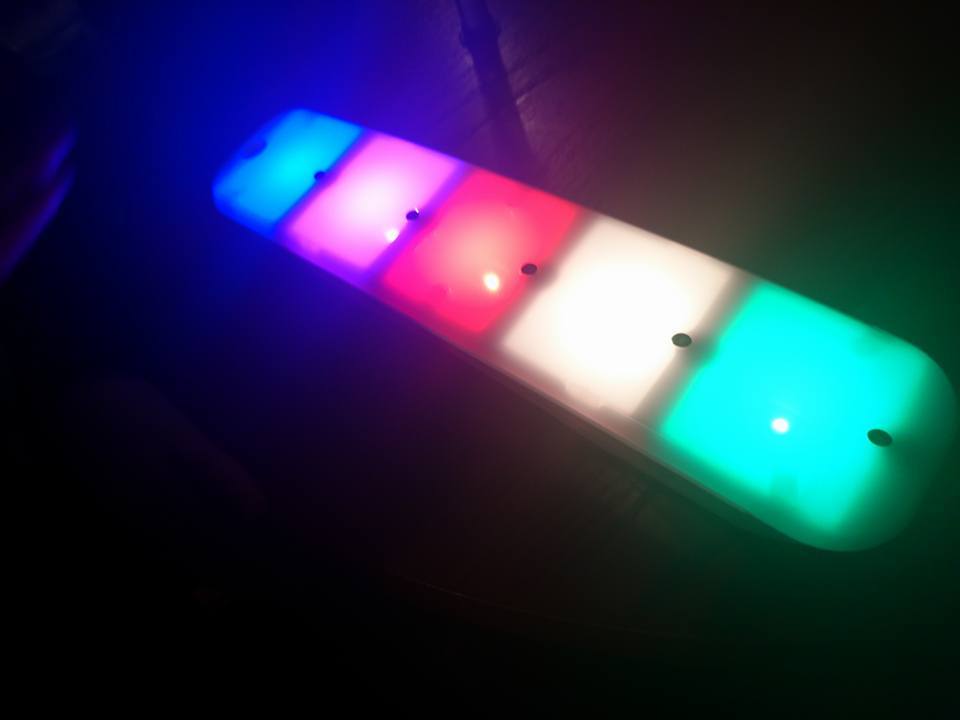 The lights made it an absolute nightmare to photograph but it was a lot of fun to play. The wave electronic game has 5 different games: Catch me, Join, Make Music, Follow and Remember. We only managed to play Catch me, follow and remember before it was time for everyone to go home but I am looking forward to getting it out again to try the other games. The Wave is a non contact electronic game that works by you waving your hand over the coloured spaces. There are two moves to master which are trigger (when you move your hand in and out over the space) and move (when you move your hand left and right to move one of the coloured lights). All of the games use one or both of those two moves. The game requires 4 AAA batteries and there are some demo batteries included which are great for getting started. The game is suitable for 1 or more players which means you can play by yourself but we liked the challenge of beating each others high score. It says it is suitable for ages 7 plus but I was beaten by a six year old so I wouldnt worry about that too much.

We were sent a few more Spin Master Games that we didnt manage to play but as we had so much fun we have already made plans to get together for a night in December so I will take them with me for even more family friendly fun.

We love playing games together as a family and being able to share this with friends as well was really good and I want to thank Spin Master Games for giving us this opportunity and making us get together. It has really made us realise that we don’t need to go out without the kids to have fun, we can all stay in together instead.

What Christmas is really about – Spending time together