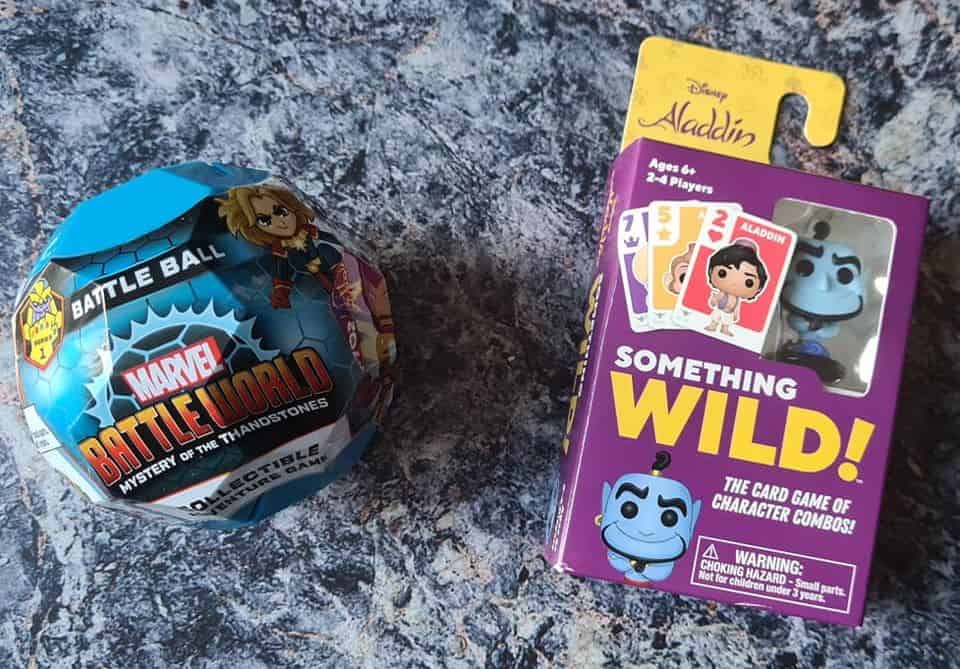 We are huge fans of Funko but it may come as a surprise to some people that they make way more than just the Funko POP! figures that they have become known for. We were recently sent two of their lower price point games to share with you. Both of these items make great stocking fillers.

You can play by yourself or multiplayer. The game actually looks more complicated than it is but there is a great video on the Funko website that explains how to play Marvel Battleworld. You need to play and win a Thanostone battle to be able to open your Thanostone and release your 2nd hero. You can then open your mystery hero card which matches your hero and continue playing with 2 heroes.

There are 30 heroes and 60 battles to collect and what I really love about these is that the battleworld ball actually turns into a display stand for your hero and their card. These make a great collectible and are the perfect stocking filler price at £6.99

The Something Wild! Card games are currently available in 6 varieties and you can play with just one deck or multiple decks. You can collect the following decks – Aladdin, Maleficient, Mickey and Friends, The Little Mermaid, Toy Story and The Nightmare before Christmas.

We were sent the Something Wild! Aladdin deck which comes with a mini Funko POP! figure of Genie.

Inside the deck you also get 45 character cards and 10 power cards alongside the instructions. The aim of the game is a bit like rummy so you are looking to create a set of the same number cards or a run of numbers in the same colour. The power cards are in the middle and the top card is turned face up.

On your turn, you pick up a card from the pile and then place a card face up in front of you. If the card you place is the same colour as the power card you get to take the Genie figure. If you have the figure you may use a power card on your turn, this can be a power card that you already have or the one in the centre.

If you are using more than one Something Wild! game then you will have one power pile per figure but all the character cards are shuffled together. You may only use a power card that matches the figure you hold and you may only take one figure when matching the colour of multiple power cards. You can hold multiple figures but you can only use power cards that match the figure/s you hold.

We had a great time learning both of these Funko games and I love the fact that they come with mini figures and have an expandable element to the game meaning that you want to collect them all.