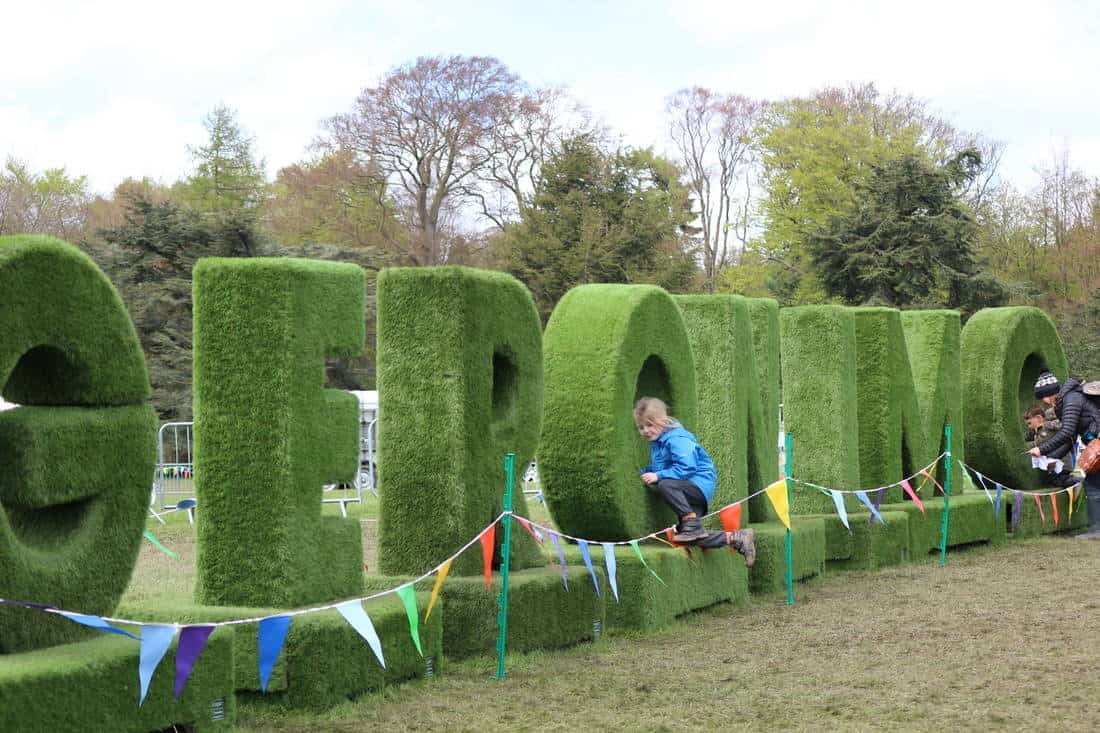 As a Geronimo Ambassador family we have been looking forward to going back to Geronimo Festival for a few months now but on Sunday evening when I returned home from a full day elsewhere I checked their facebook page to see how the day had gone and was shocked and surprised by all the negative comments. Obviously I wasn’t there and had never been to Harewood House before so contacted some friends who I knew had attended that day.

There were definitely some issues regarding traffic, entry queues and the pure volume of attendees. There was also some issues regarding food availability due to the number of food vans on site. I was a bit concerned that I would drive an hour and a half to arrive at an event that was just as much chaos as the day before so I phoned ahead. As I was lucky enough to have press passes I contacted the PR direct and asked them to be honest with me about the event as I would have to write about my day if I attended and I gave them the option for me not to attend. After a few minutes conversation they convinced me to jump in the car and head over to Leeds to see for myself.

Now Sunday had been a sell out day and Monday was expected to be about a third of the amount of people in attendance so already I was feeling confident that we wouldnt have the same issues. We arrived at 10:30am with no queue to enter the car park or traffic on the road. We also didnt have to queue for more than 5 minutes to gain entry to the venue (although this was through the VIP gate). In fact we didn’t queue to do anything all day, well apart from a few minutes to ride a camel but we just made sensible choices on what we wanted to do (and saved the helter skelter until the end of the day when there was no queue). We managed to fill the day until the very end and still didnt manage to do even half of the activities on offer.

I am not saying that the whole day was absolutely flawless because it wasn’t. For example the stage was in a really bad position. It was fairly low and was on a flat piece of land which meant that the kids couldnt see anything happening on the stage. I think it was the same stage used at Tatton Park last year but that one was parked at the bottom of a hill which meant that there was a natural auditorium around the stage for people to stand or sit on. However this didnt impact us as we were not there for the shows and instead went off in search of all the amazing activities we could take part in. Search was definitely the right term.

The main issue we had was a complete lack of a map. I understand that the organisers would have been unable to do this until they set up but it should then have been a priority to get one drawn up and distributed (even if it was just a rough sketch for people to look at). Another issue we had is not knowing what was happening in any of the white tents or even when things were happening. This meant that we missed things that we really wanted to do such as Jedi Training and even when times were announced on the stage they were not accurate. We headed over to the circus for the 3pm show which was announced on the main stage in the morning and there wasn’t one! Luckily there was a 4pm show so we didn’t miss out.

We had an amazing fun filled day but the timings of shows and the general administration side of letting the attendees know where things were and what time they will be on was a real let down but I am sure that this will all be corrected for future events.

So now I have all of the moaning out of the way I thought I would share with you some of our highlights from all of the things we did and saw. I have to say that one of the things that Elizabeth enjoyed the most was all of the animals. She really enjoyed riding the camel and seeing the giant tortoise, ferrets and owls. 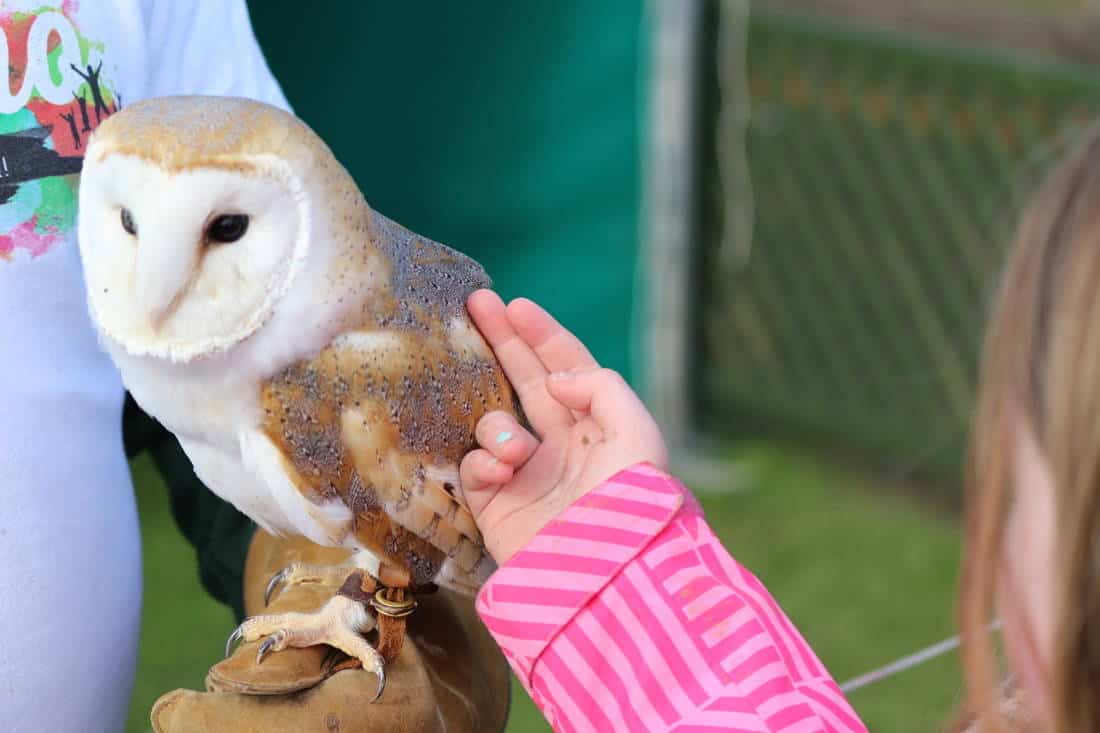 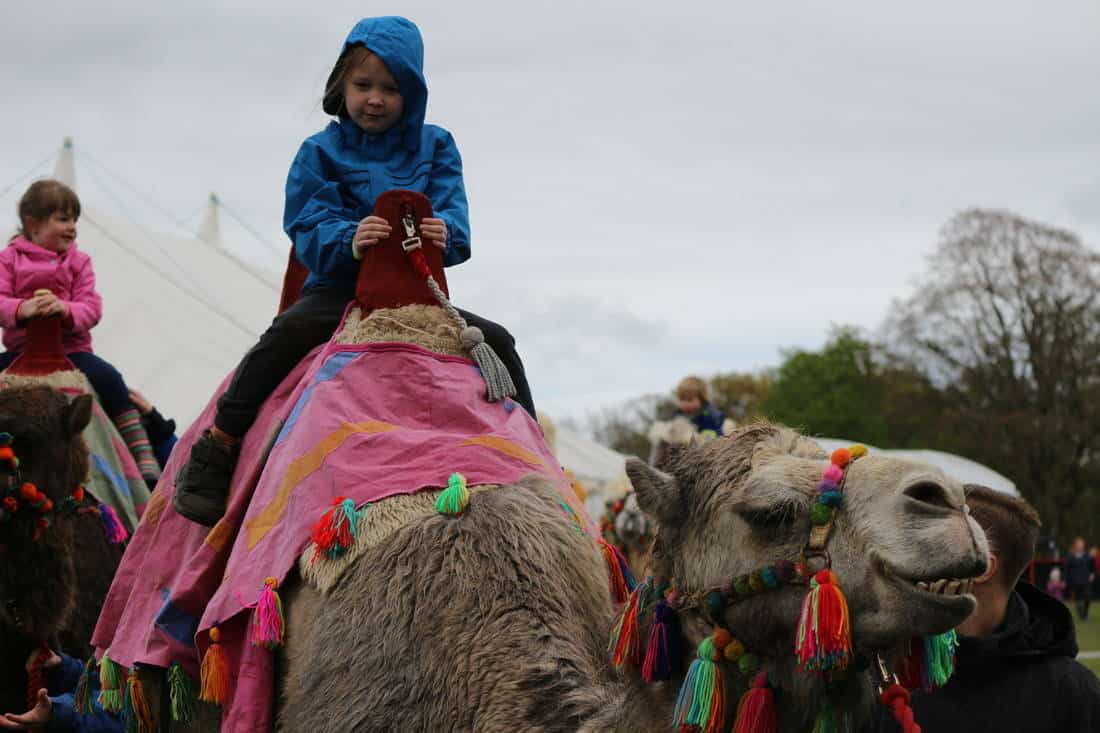 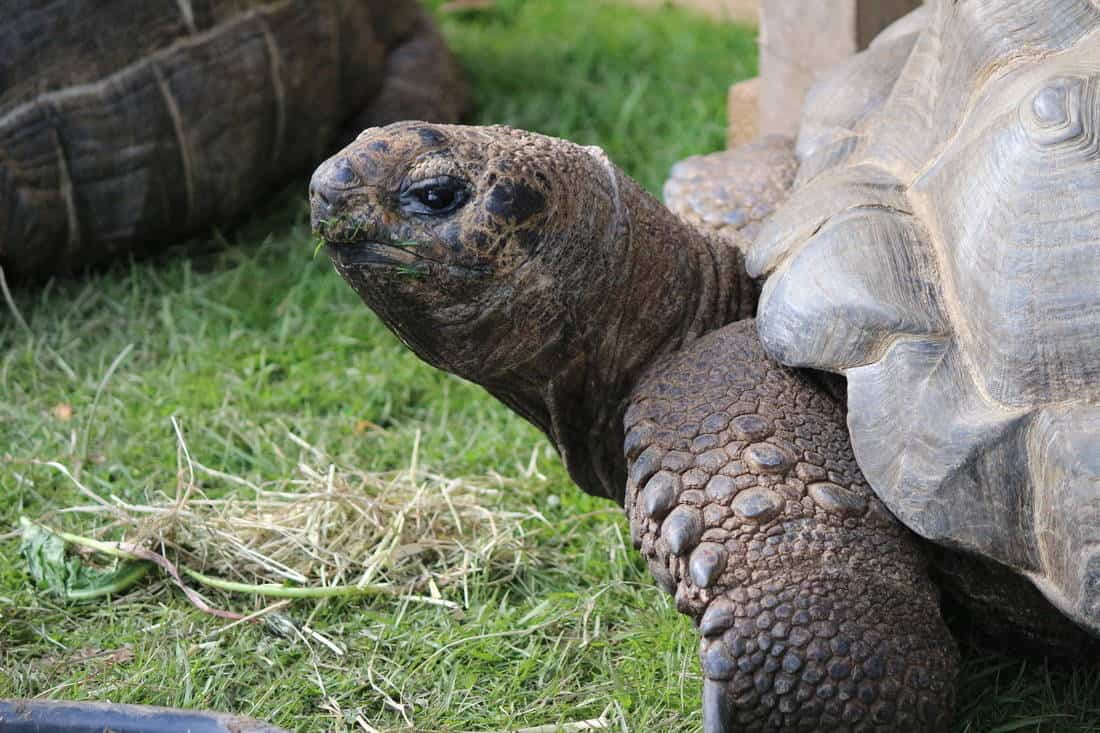 Her all time favourite thing involving animals was the dog shows. She loved seeing the police dogs in action but the sheep dog herding the ducks had her in fits of giggles and I have to say it was amazing to watch. 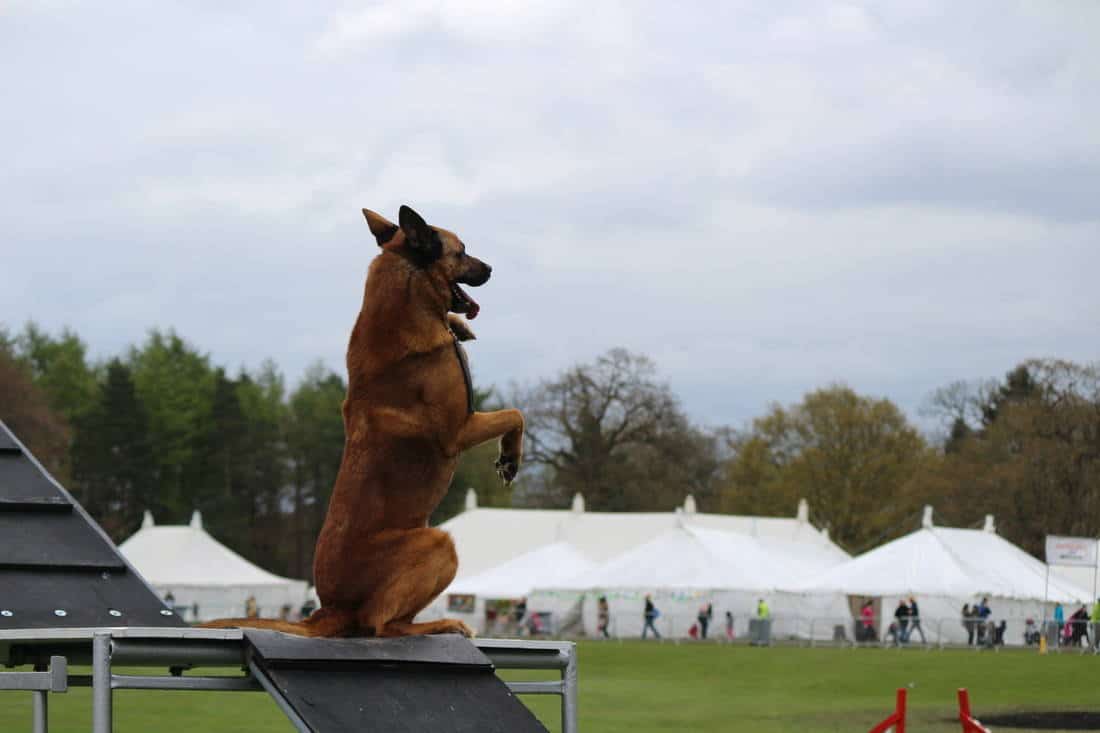 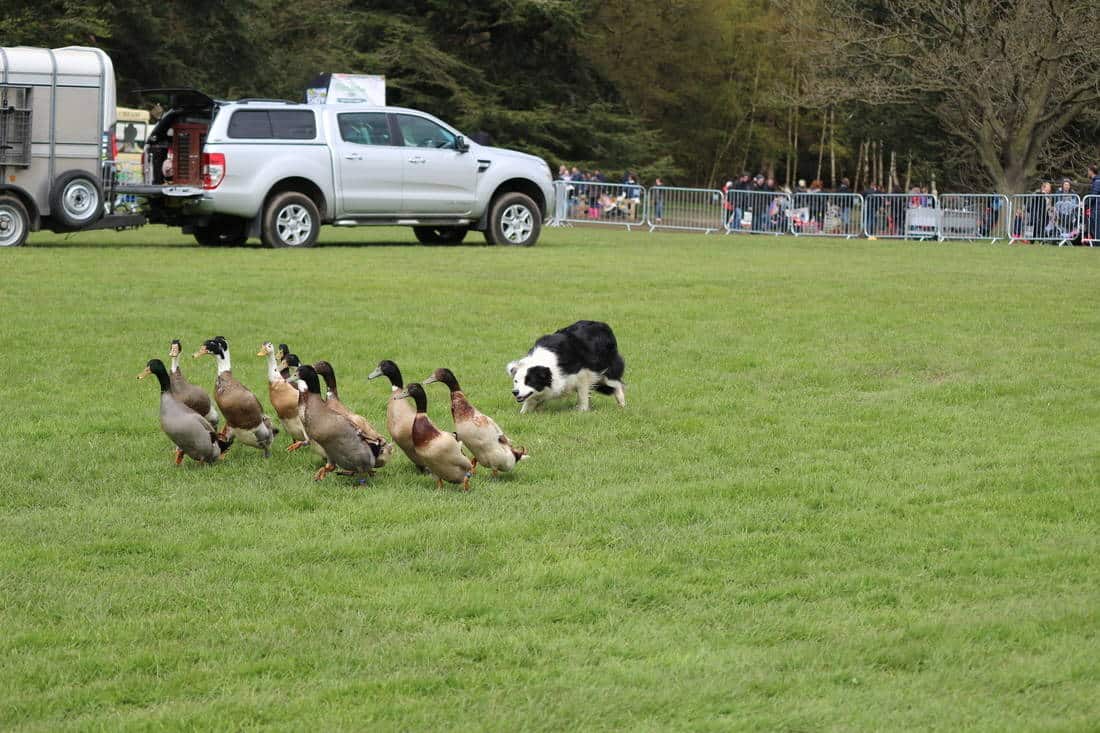 The girls enjoyed going on the various fairground rides including multiple goes on the carousel, swing boats and the chair swings. 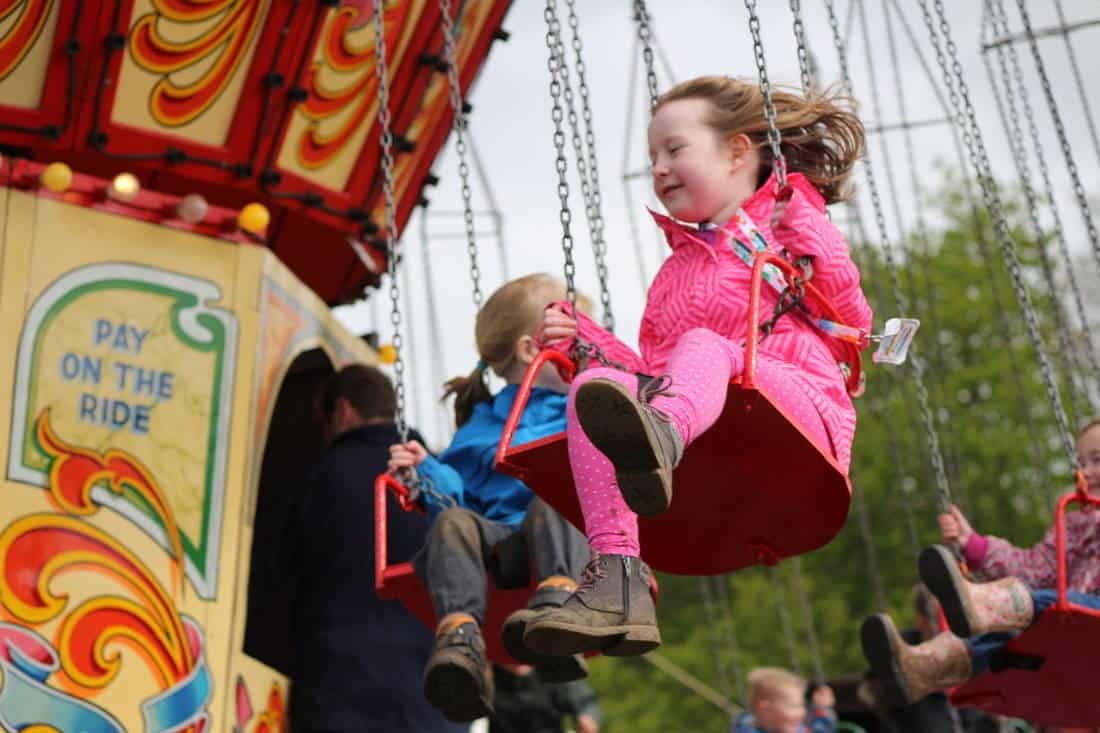 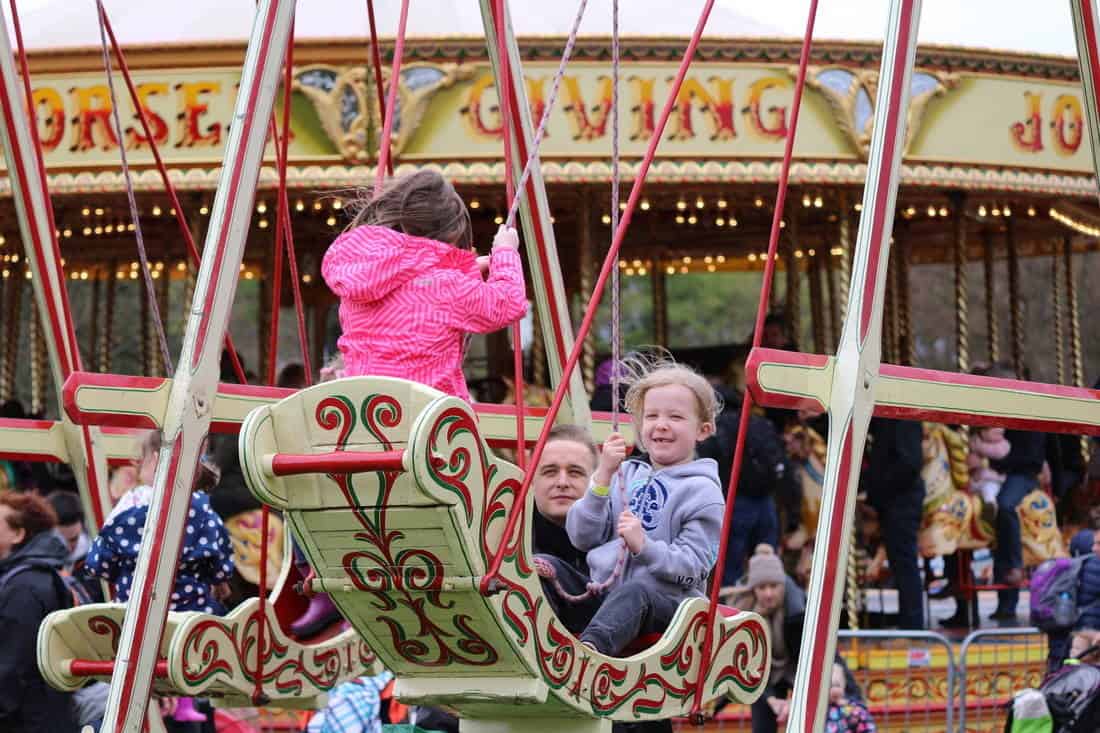 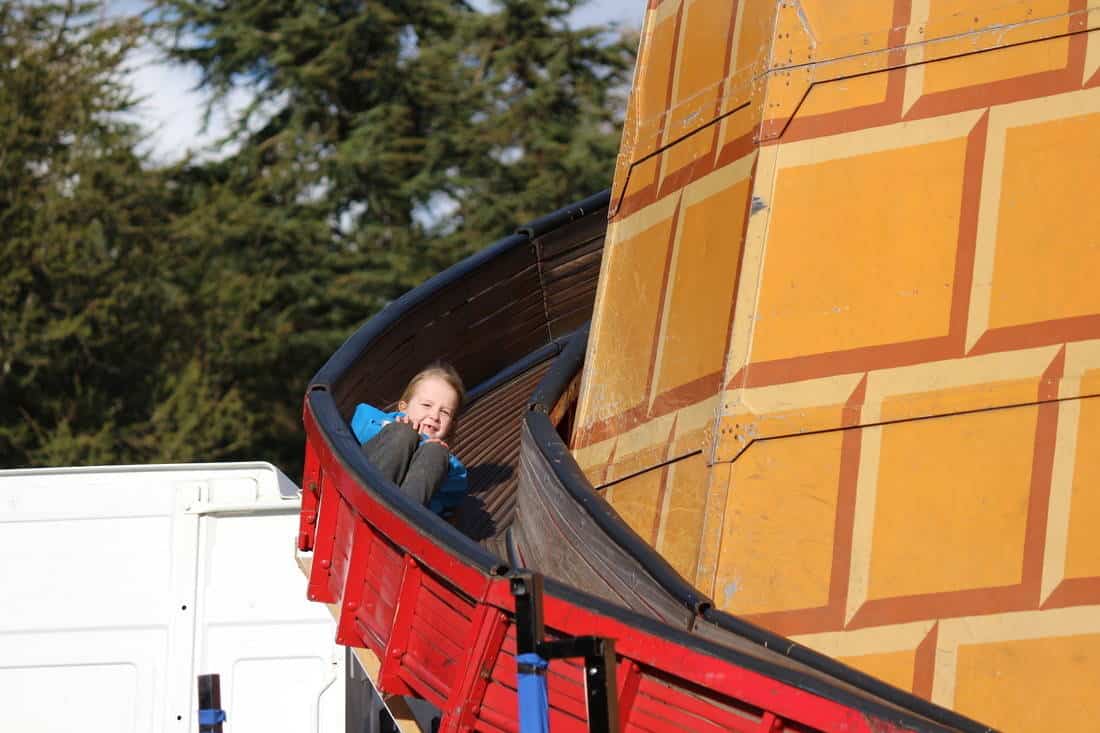 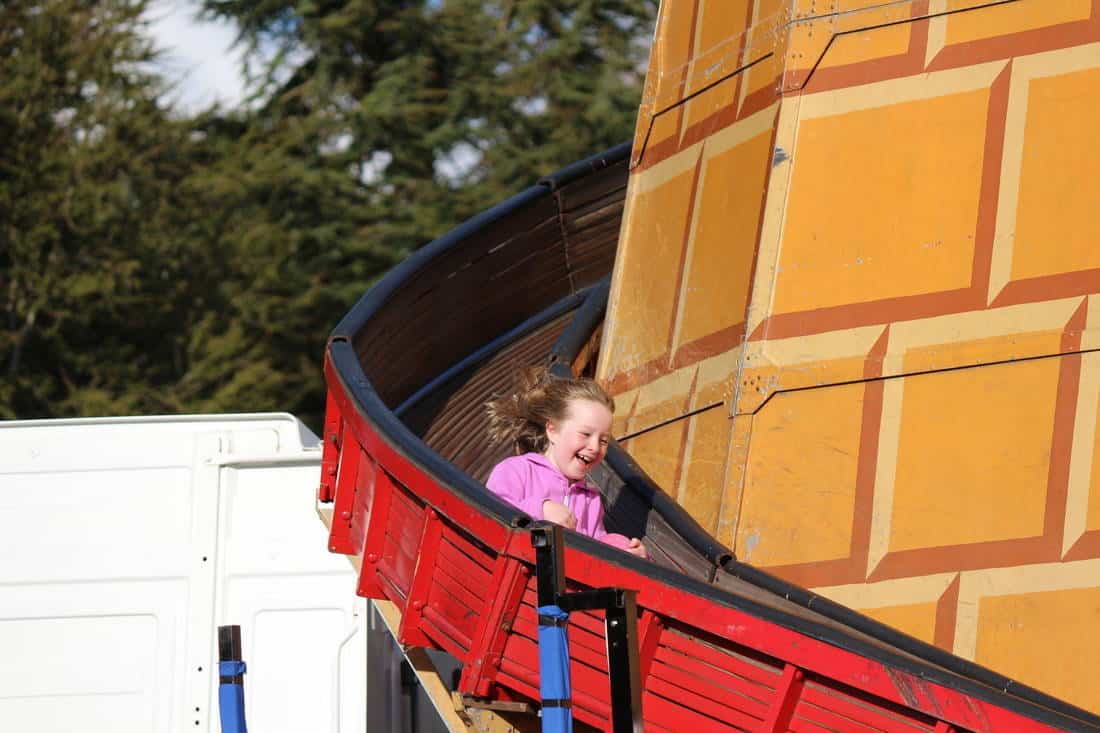 The circus was amazing and it was so great to see old favourites Clive Webb and Danny Adams from Cirque du Hilarious heading up the show which was a real surprise and definitely a welcome addition. We love watching Clive and Danny in action and it was the first time we have seen them in a tent environment.
The girls and hubby really enjoyed the roller rink and I was glad to see I could go on in my shoes! They had a great time and we struggled to get them off so we could move on to the next activity. It was great to watch them improving after even just a short period of time and they were both concentrating really hard to get round without falling over. 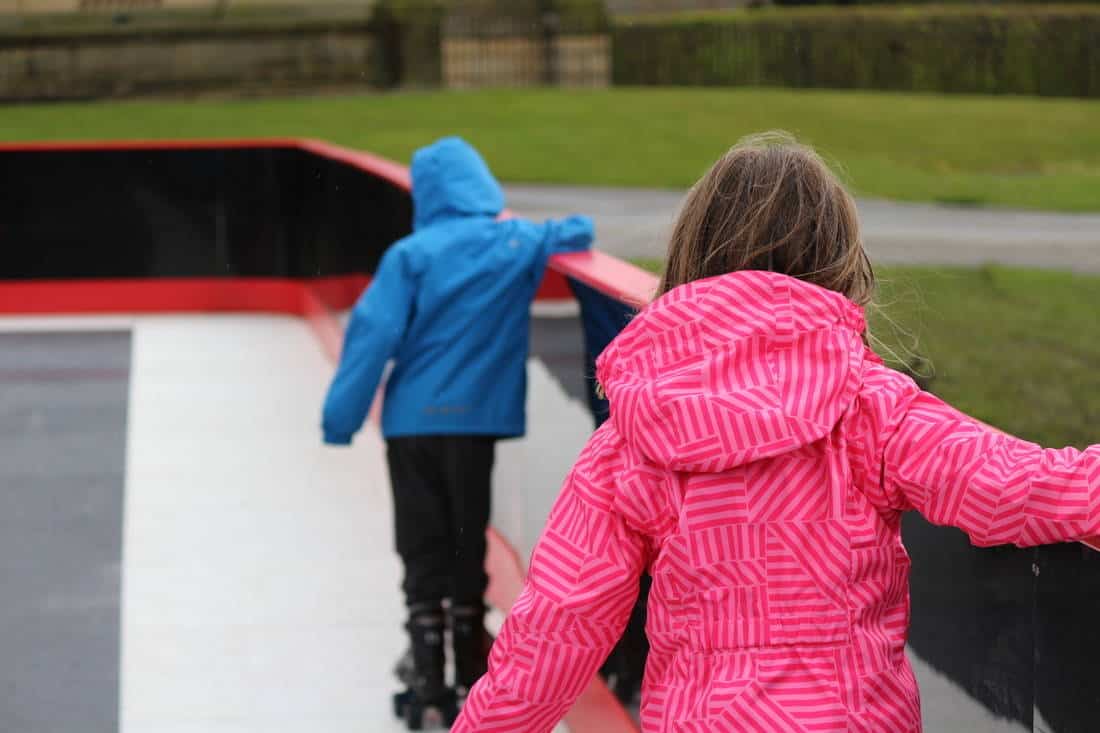 The outdoor entertainment was brilliant and we really enjoyed watching the street performers as well as the acrobats and all the stunt shows. It does make me wonder what we were missing inside the tents but with so much to see and do we just didnt have time to investigate them. 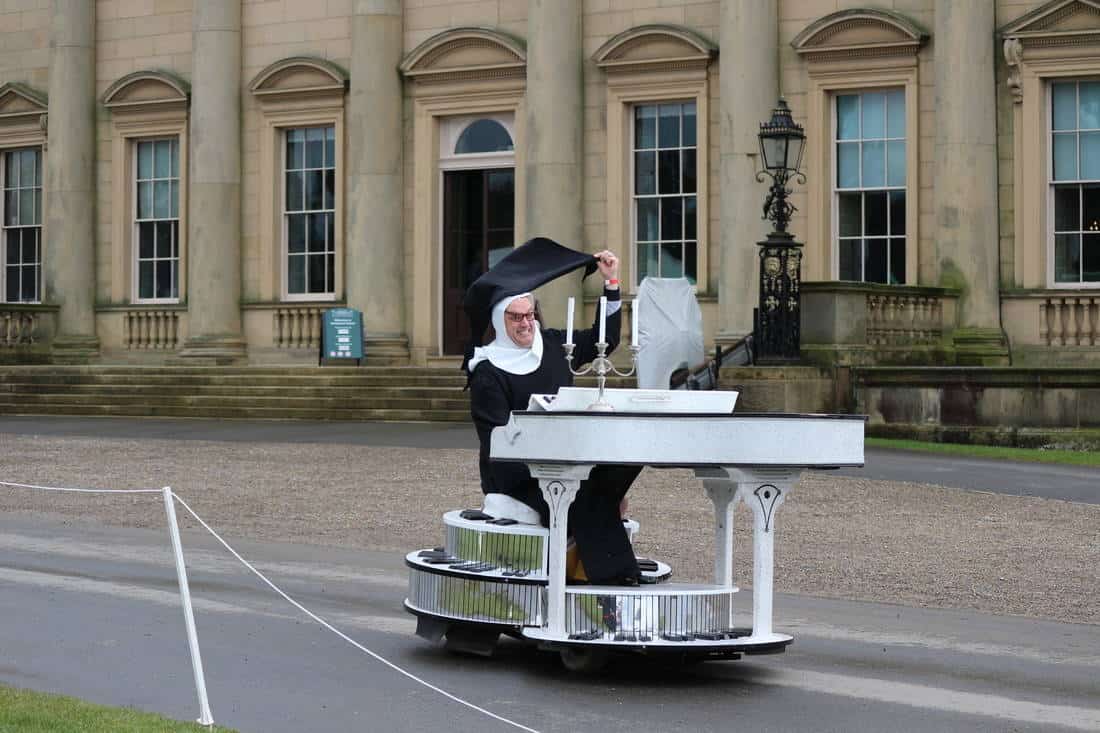 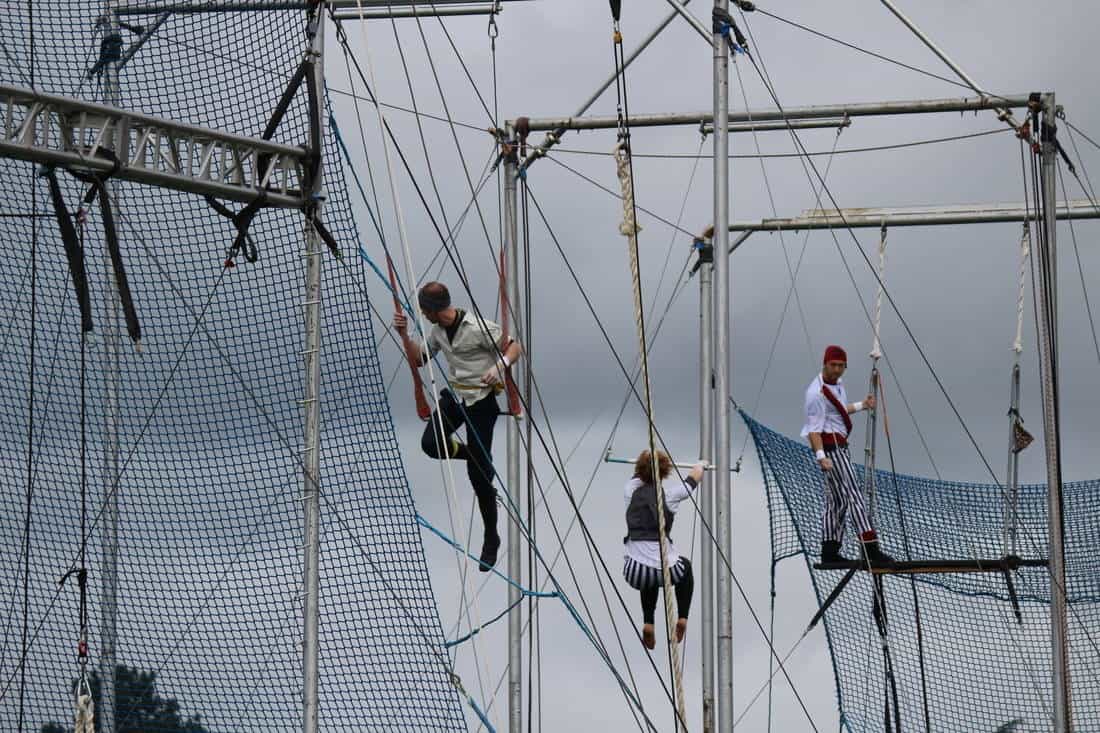 The one place we knew that we had to go was the forest in search of Monkey Do. This is something that both girls really enjoyed at Tatton Park last year so we knew that they definitely wanted to do it again. We had to wait 20 minutes for the next session to start so whilst we waited they built a den against a tree and flung some knickers using a giant catapult, as you do! 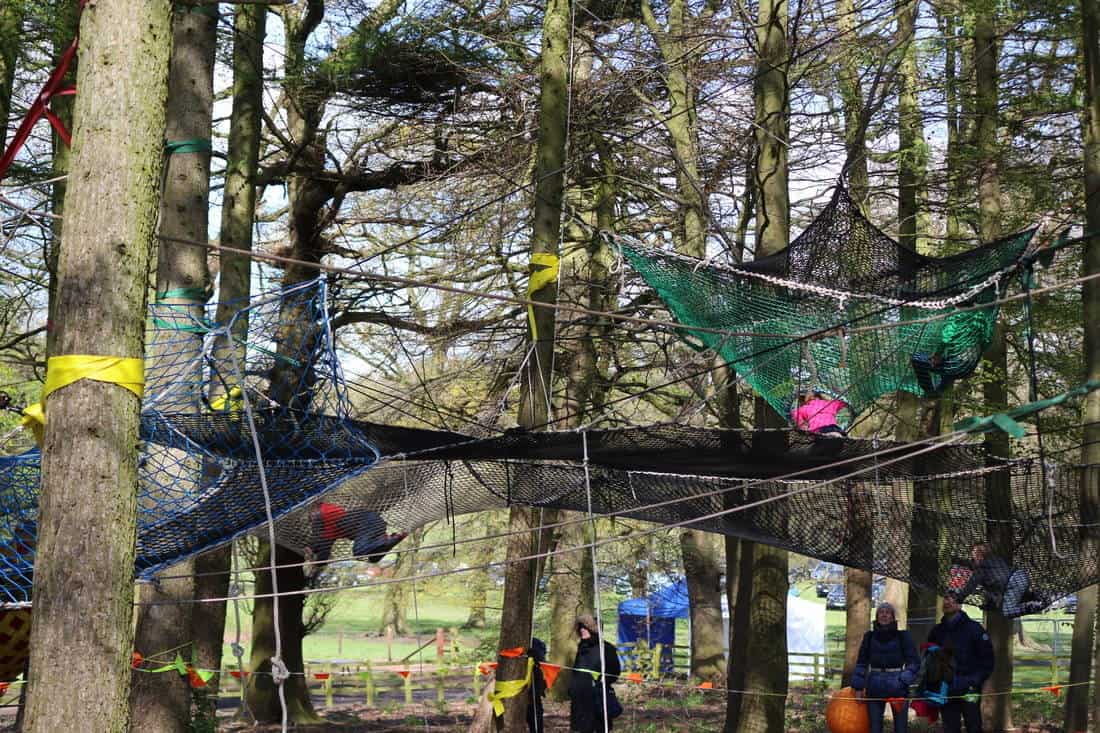 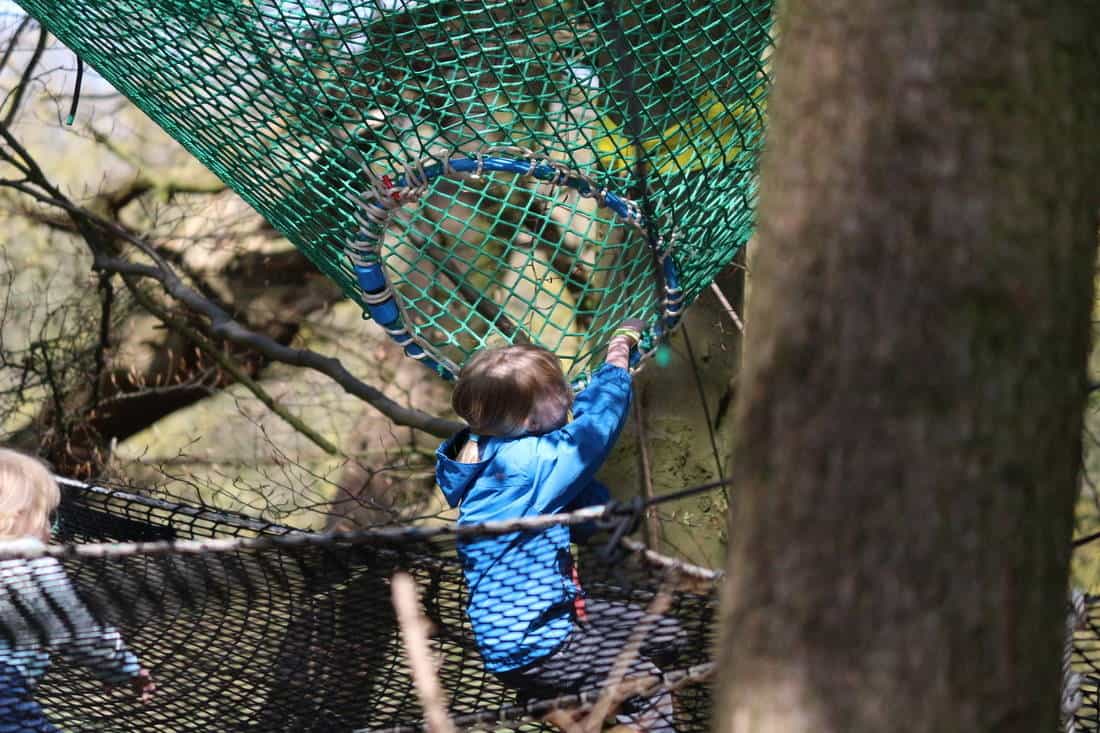 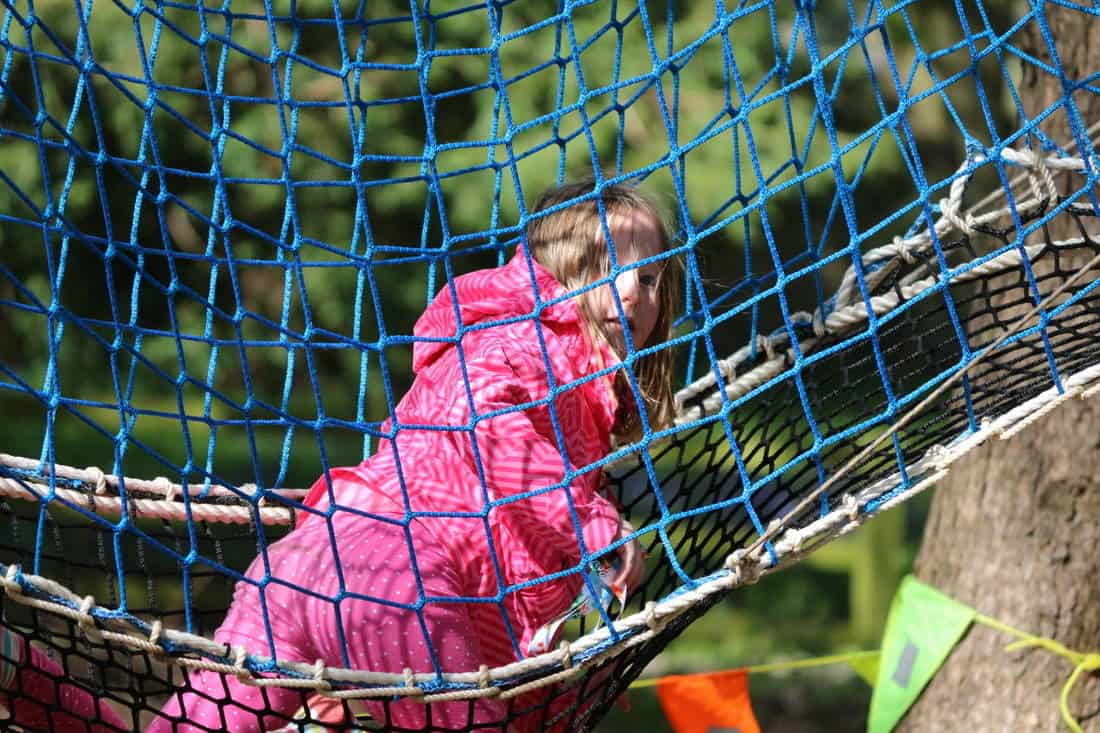 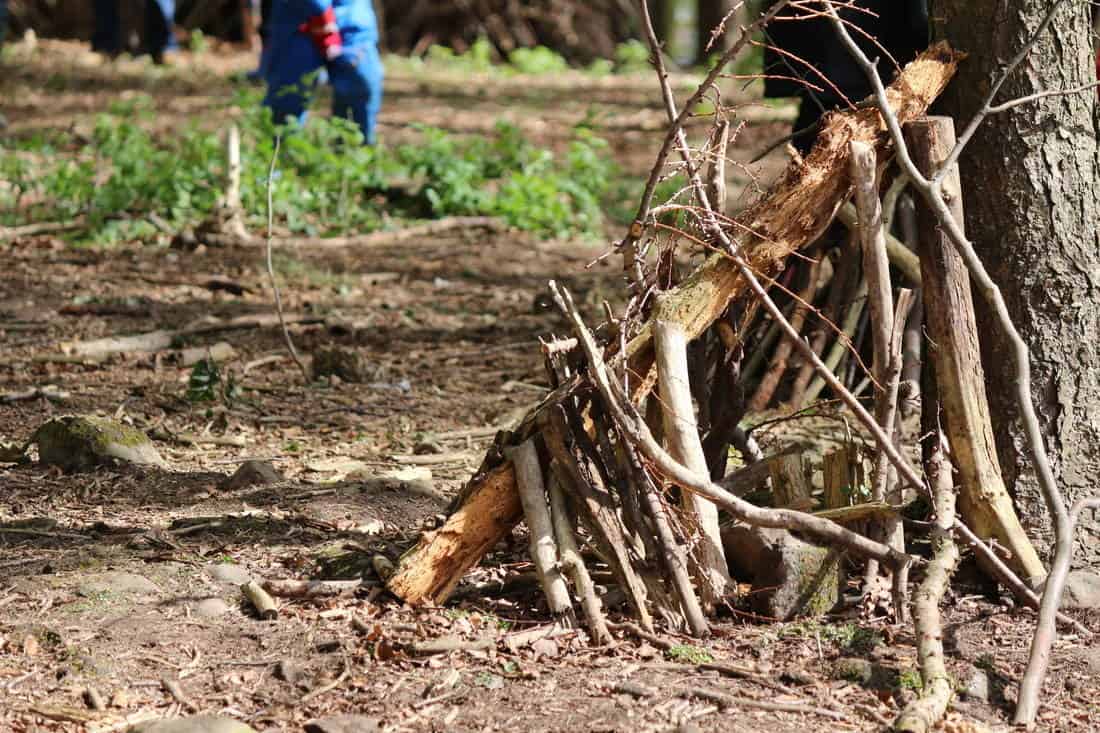 We did have a bit of a downpour half way through the day but I had packed a change of clothes so as soon as it stopped we got changed and headed for more fun and adventures. We also sampled food from a few of the catering facilities with the corn being the girls favourites whilst I opted for the spit roast chicken wraps and chips which was so delicious I had it for lunch and dinner!

We finished off the day swinging in the hammocks and wishing that we didnt all have to go back to work and school the following morning and looking forward to even more festival fun over the summer. 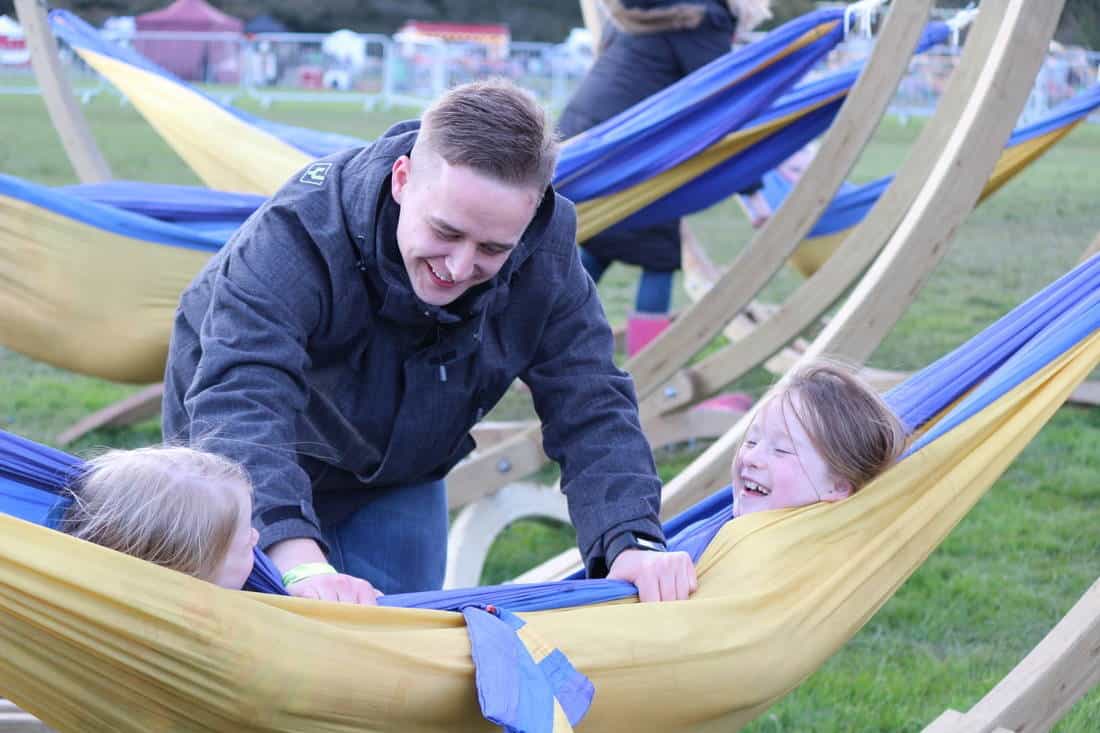