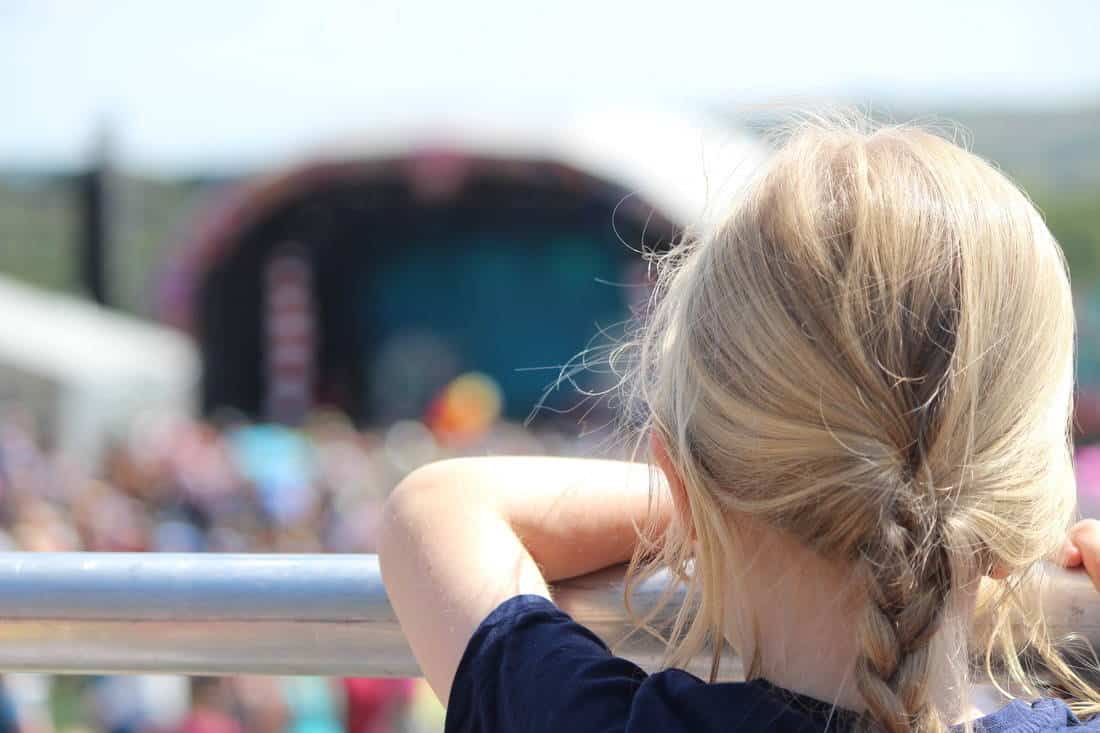 When I decided that we were going to head to Camp Bestival for our first ever family camping festival experience I really wasn’t sure what to expect. I have helped to promote the event the last three years and it has always sounded amazing but would the reality really match up to my expectations?

With so many different areas I will be honest and say that we didn’t even get to visit them all as a family although I did have a wander myself to see if we were missing anything spectacular. The only thing we decided at the beginning was to only put one or two things into the schedule each day and spend the rest of the day doing whatever caught our interest. Now, this did mean that we missed out on some of the bookable experiences but it also made for a chilled-out experience that was pretty much led by the children.

There was one area that we had to keep going back to and that was Lizzie’s Way in the Dingly Dell.  The whole area was full of magic and wonder and it was Alison’s favourite place, especially the mud kitchen. As I sat and watched her play I was saddened to hear some of the parents shoo their children in the opposite direction as soon as they saw the mud. This is still Alison’s favourite memory from the whole weekend! 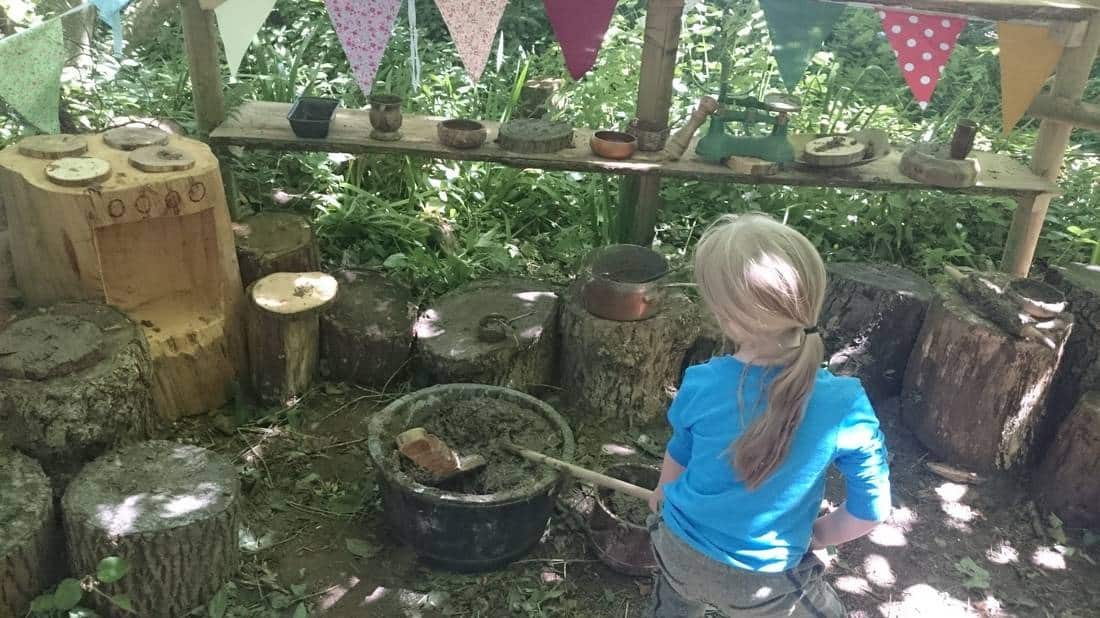 One of the places that Elizabeth really enjoyed was the National Trusts 50 things to do before you’re are eleven and three-quarters. She loved ticking off all the things we have already done and reminiscing on how amazing some of the experiences have been. We then proceeded to tick off even more including building a raft and rolling down a hill, something which has become a new favourite pastime. 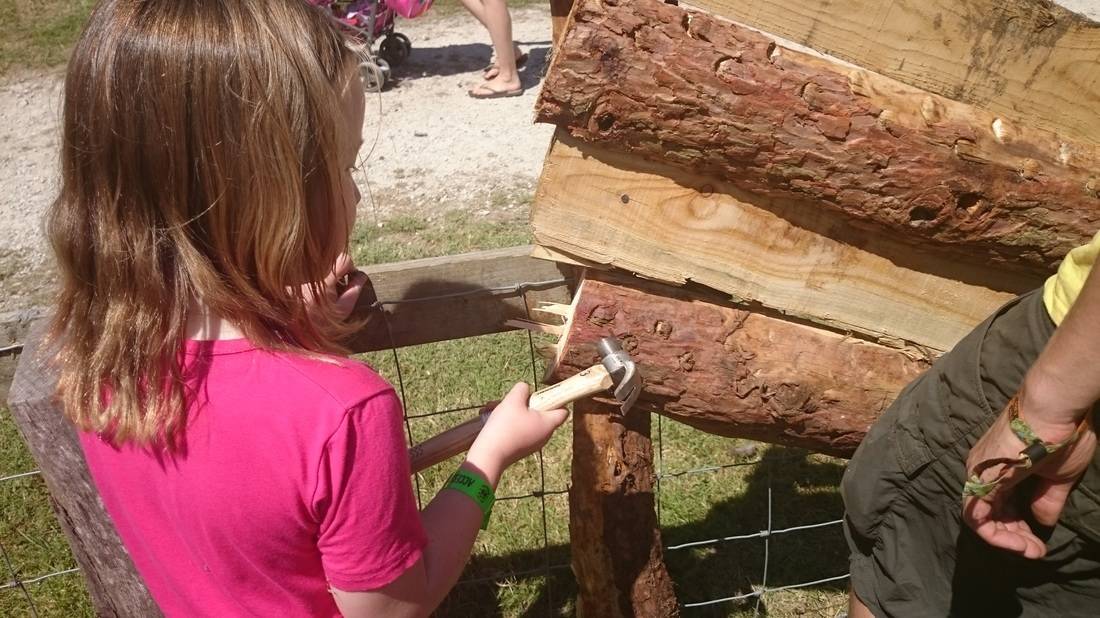 Although we came prepared with our own selection of bubbles, bubble wands and bubble guns they both soon decided that the Bubble Inc stand was where they wanted to spend all of their money but I have to say that it was money well spent as it kept them quiet for hours and we even had bubble mixture to bring home with us at the end of the weekend.  The Bubble Inc stand was lots of fun to sit outside as well as they have a variety of machines blowing out bubbles including a fabulous smoke-filled bubble machine which the kids thought was magic.
One of the things that both girls agreed upon doing was flying a large bird, this cost £5 each and they got to spend about five minutes per child flying the bird between two handlers. They were both delighted with this experience and is something that they still remember with huge grins. 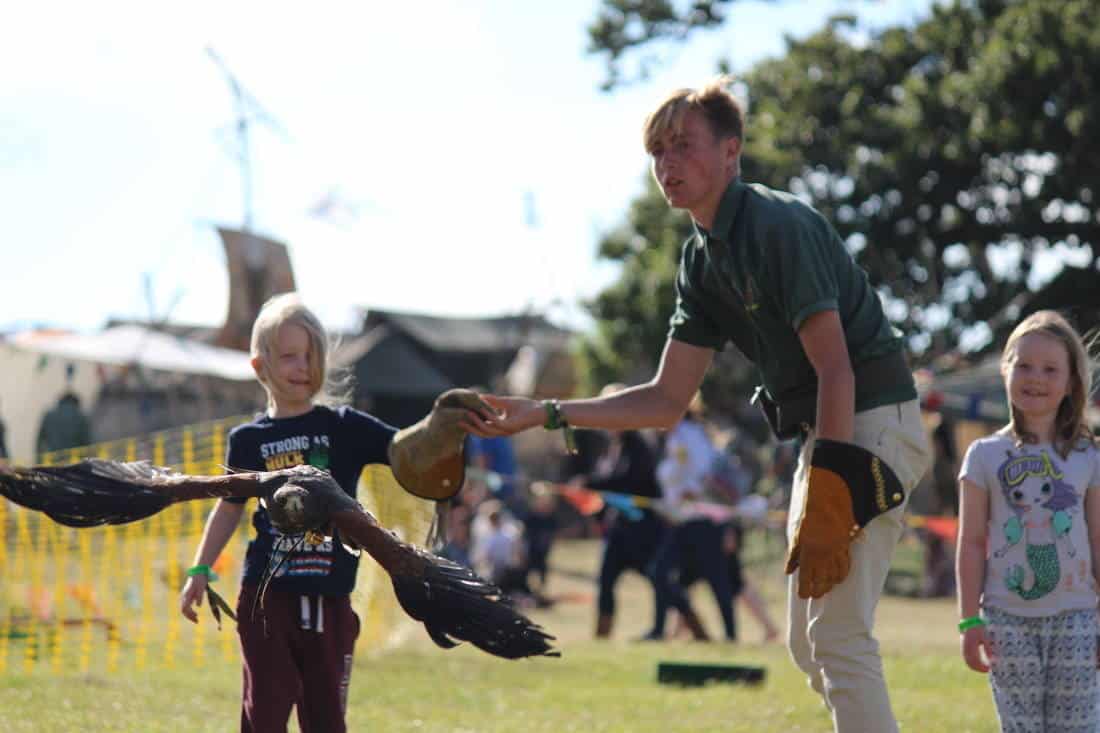 One thing that really appealed to me about Camp Bestival was the huge variety of entertainment available on the stage. Rather than cater to just one sort of person we found entertainment that would suit the whole family from comedians, childrens entertainers and theatre shows. We absolutely loved watching the Cat in the Hat and it made us really want to go to see it in the theatre. We also caught some of Dick N Dom but we have seen them previously so the girls were not as bothered about them and wanted to go and make even more mud pies. 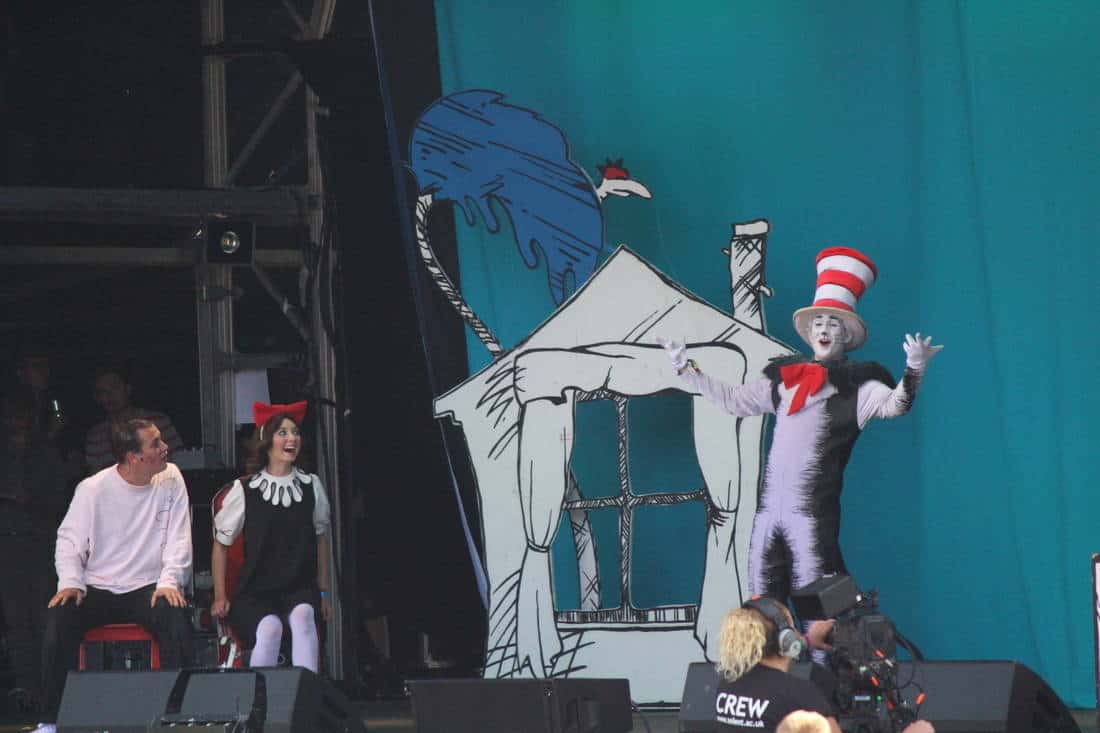 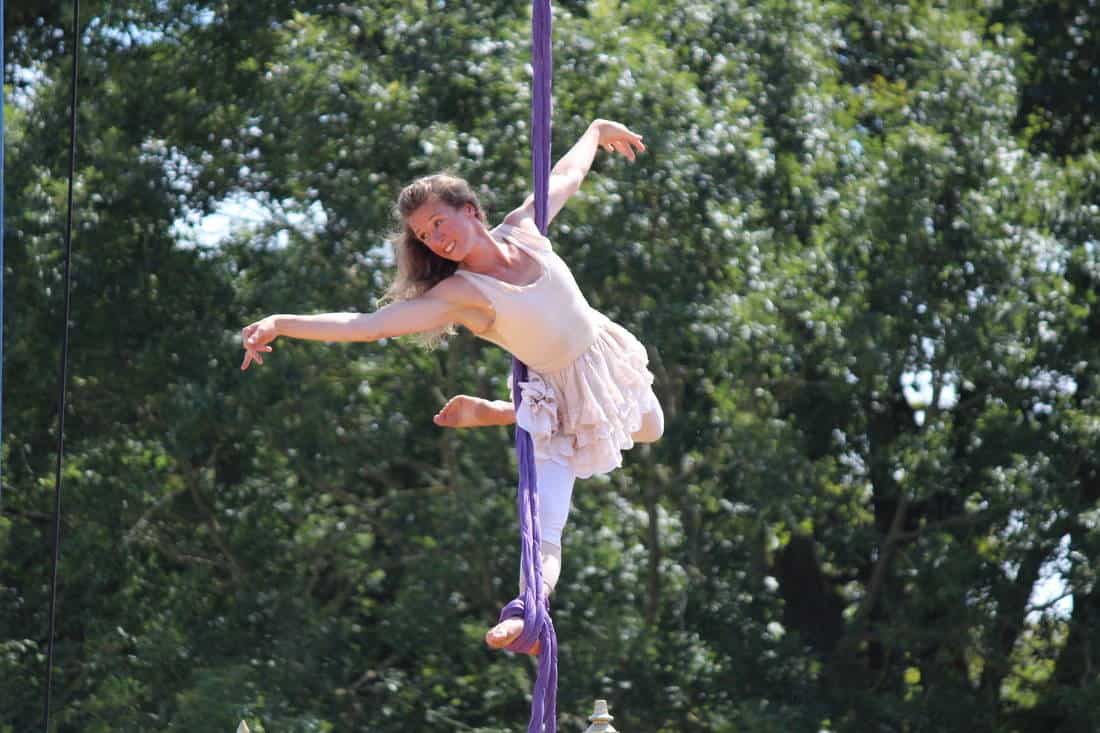 As we wandered around the festival we came across a variety of acts which absolutely mesmerised the girls. Although they were on the schedule we just happened across them each time and the girls would not budge until the shows had finished. One of their favourites was the imaginary menagerie and a small travelling circus which I failed to get the name off. If either of these shows were performing when we walked past we had to stop sit down and just wait because the kids wouldn’t move no matter what. 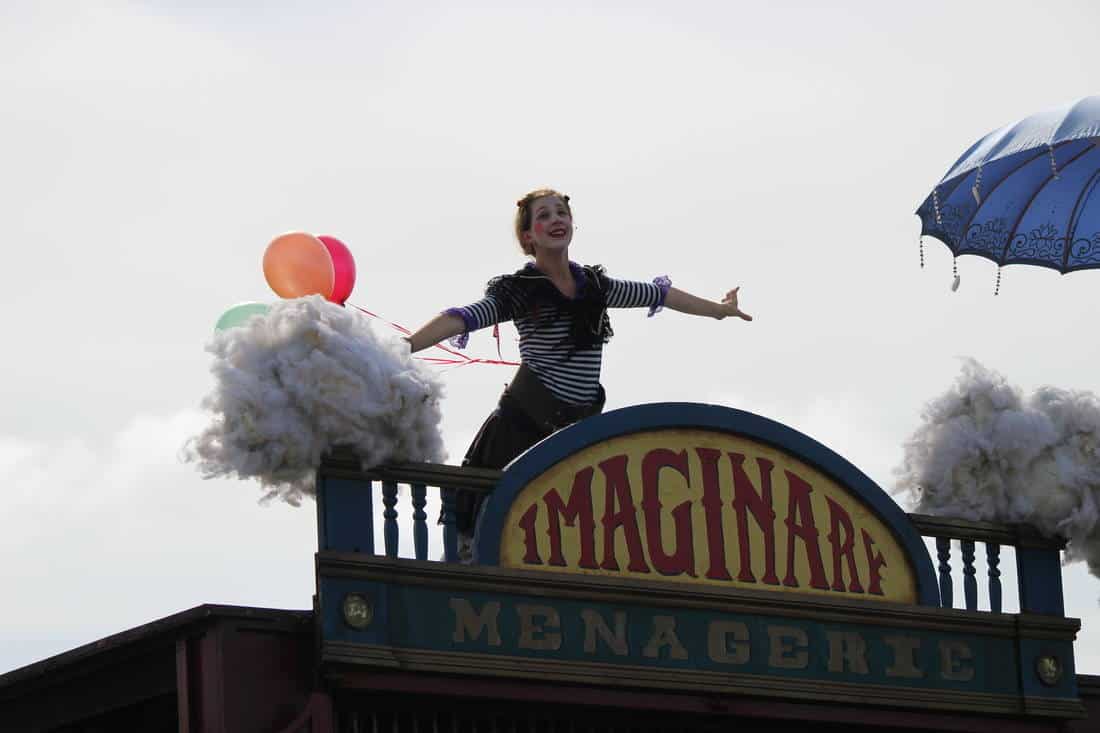 One of my highlights from the weekend and something we walked the length of the festival to take part in was the opportunity to walk a Llama. Both girls absolutely loved this. Holding on to the leads they had to complete a basic agility course with their llama. This was something we paid extra for but it was one of those opportunities that you just can’t pass up, after all how often do you get the opportunity to walk a llama? 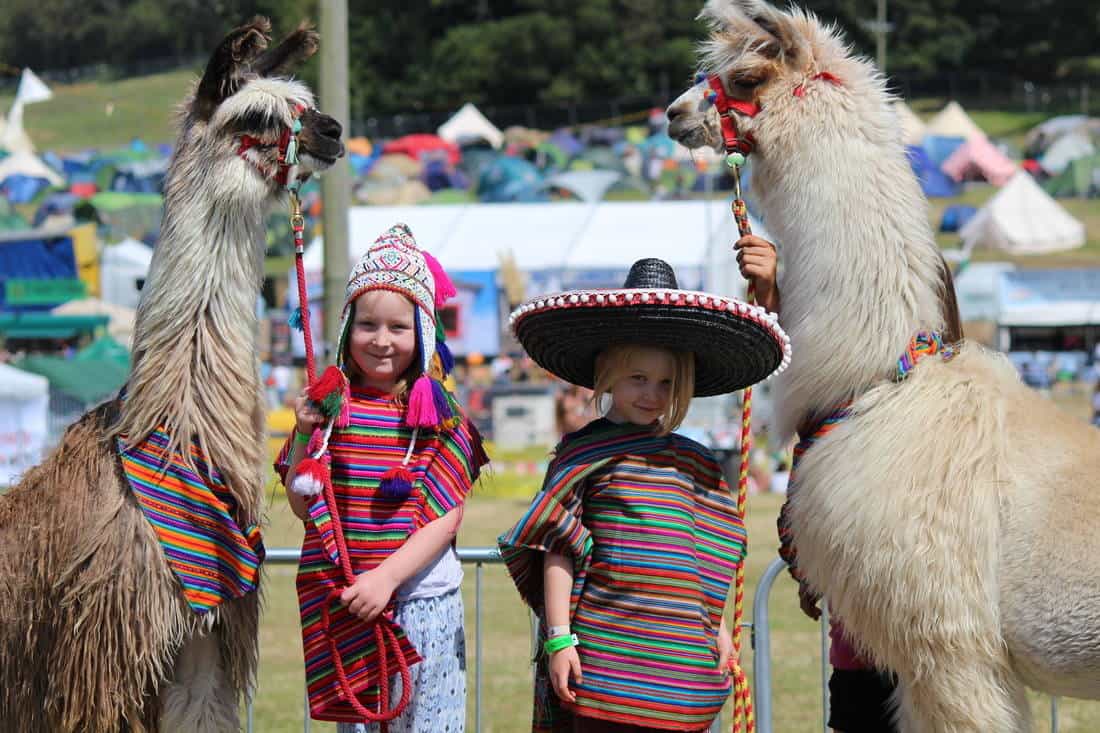 One area I kept putting off visiting was the Science museum. I am not sure what I expected but I finally decided on Sunday that I should take the girls in there and see what it was all about and I really wish we had gone in sooner! They only had the chance to take part in two of the many activities that were scheduled for this tent but what they did do absolutely blew them away. The first thing they both did was make their very own soup. They got to choose the colour and smell that they wanted as well as the moulds to use. We had to pop back later to pick them up so whilst we were waiting they jumped onto one of the other tables. This was one area they really enjoyed and the looks of concentration on their faces was amazing as they used a variety of electric components and playdoh to set off buzzers, light lights and even create their own circuits. If there hadn’t have been a queue of other children wanting to have a go, I think they would have stayed here for hours.
After each full day of activities, we slowly made our way back to the tent to sleep but the fun didn’t end there as the evening entertainment continued on the main stage with some fantastic headlining bands to entertain the young and the old. I did manage to catch a few songs by the Kaiser chiefs before bed one night but with another full day of fun ahead of us the next day, our camp beds were calling. 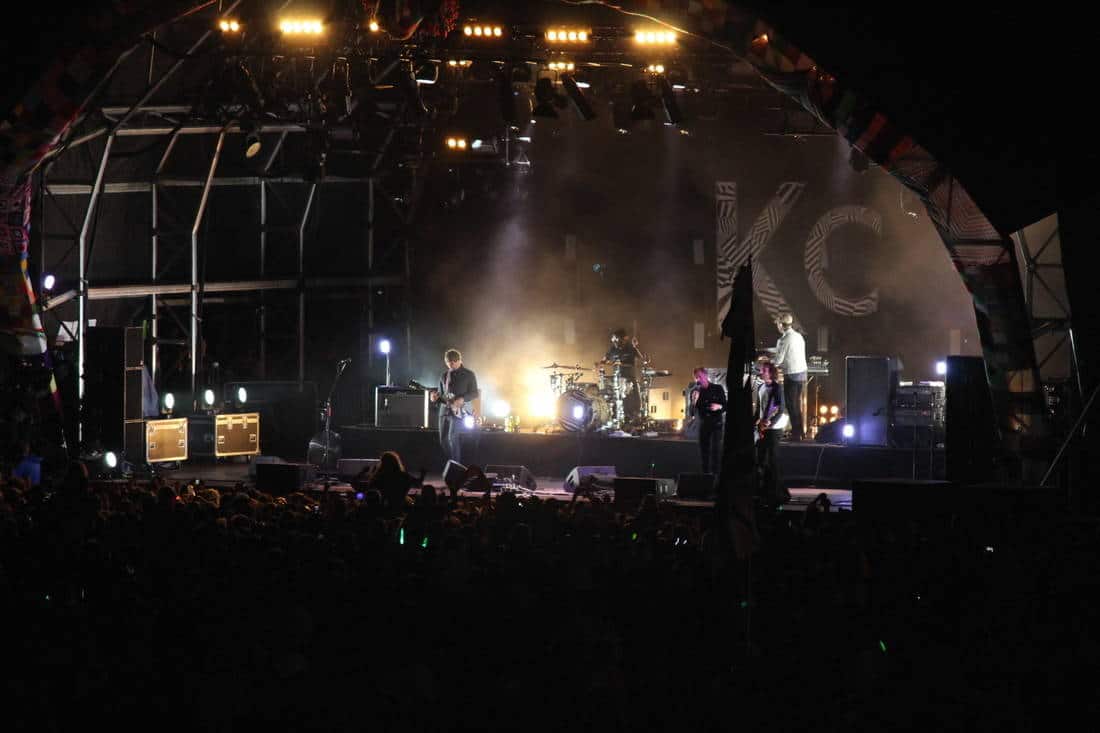 Camp Bestival was one of the best experiences of our summer and one we want to experience again and again.