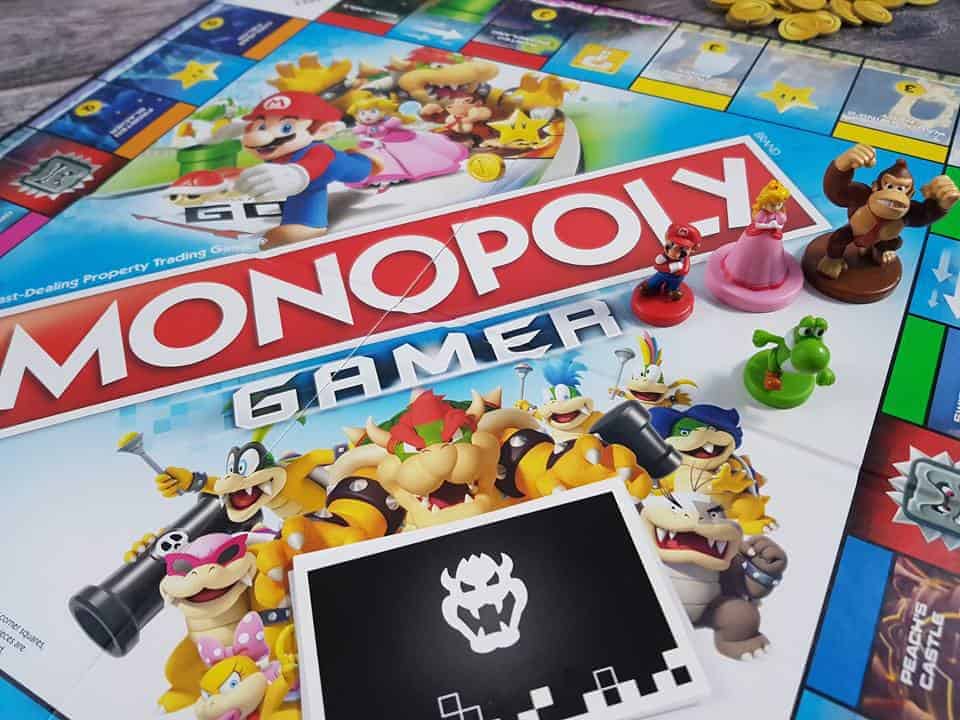 Monopoly is a bit of a british tradition and we own quite a few copies of the game in a variety of licensed versions. Up until now our favourite Monopoly was the Star Wars Force Awakens edition we reviewed a few years ago. However with the introduction of the new Nintendo Monopoly Gamer edition this has changed. 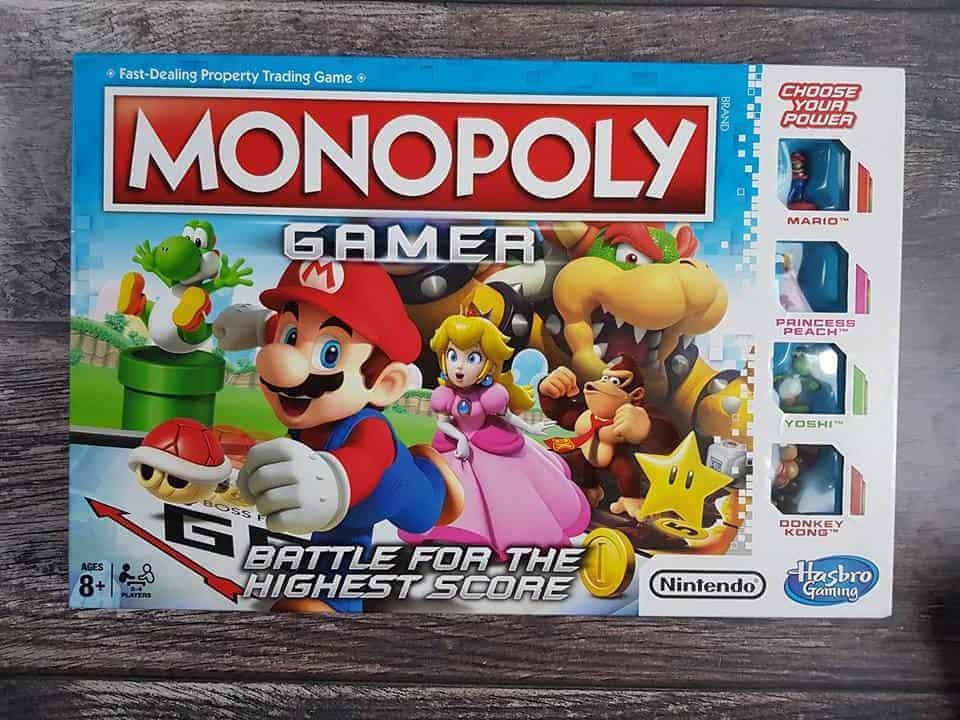 Monopoly Gamer is a bit different to the other versions that we have played which helps to keep the game fresh and relevant. The game comes with 4 different characters who each have their own power up move. You can even buy additional Monopoly Gamer Power Packs that allow you to collect additional characters and their powers to really make the game interesting. 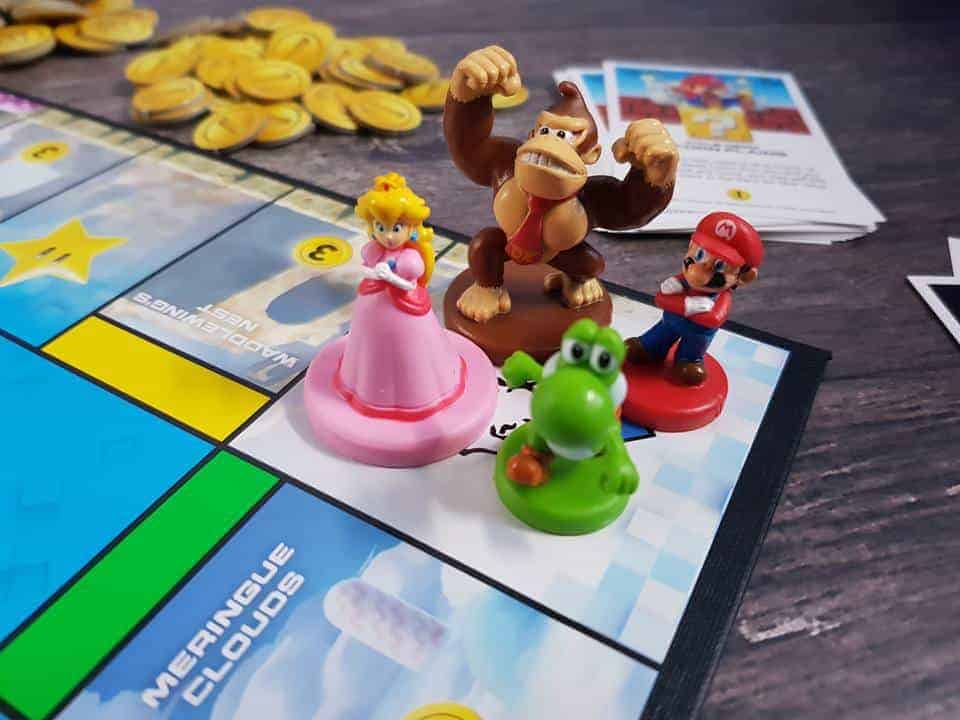 Each of the characters in Monopoly Gamer come with their own Character card that helps to explain their power ups and how to use them. The super star abilities are activated when you land on the Super Star space and the Power-Up boost makes that particular Power Up better for that character. 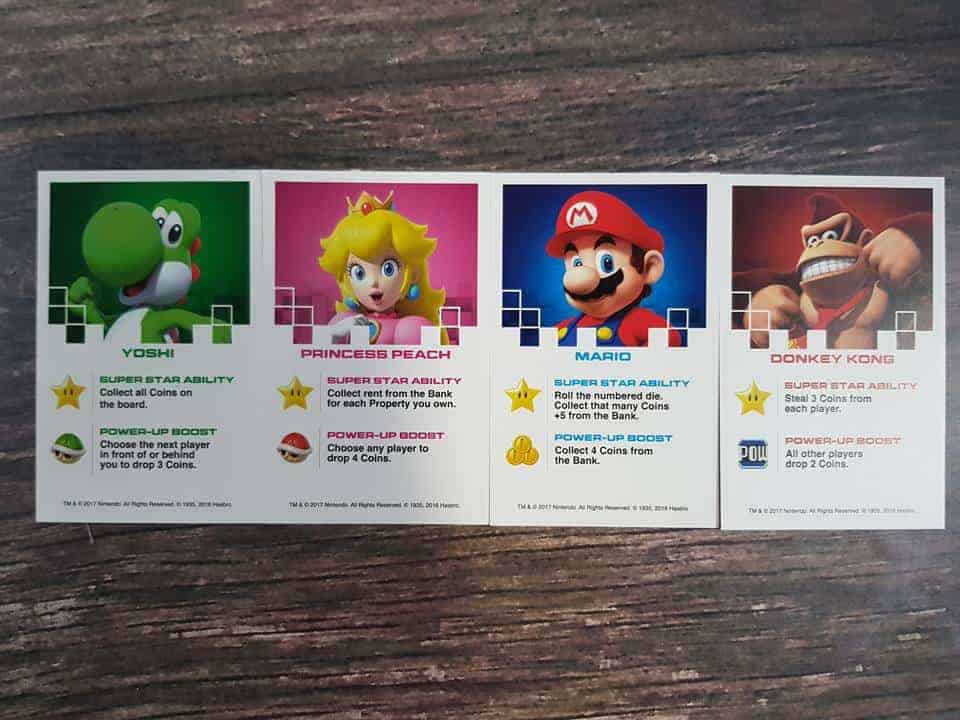 To start the game each player is given 5 golden coins worth 1 point each and 1 five coin (worth 5 points) as well as a reminder card that explains the different power up moves on the dice. I am sure after playing this a few times that you wont need the reminder cards. 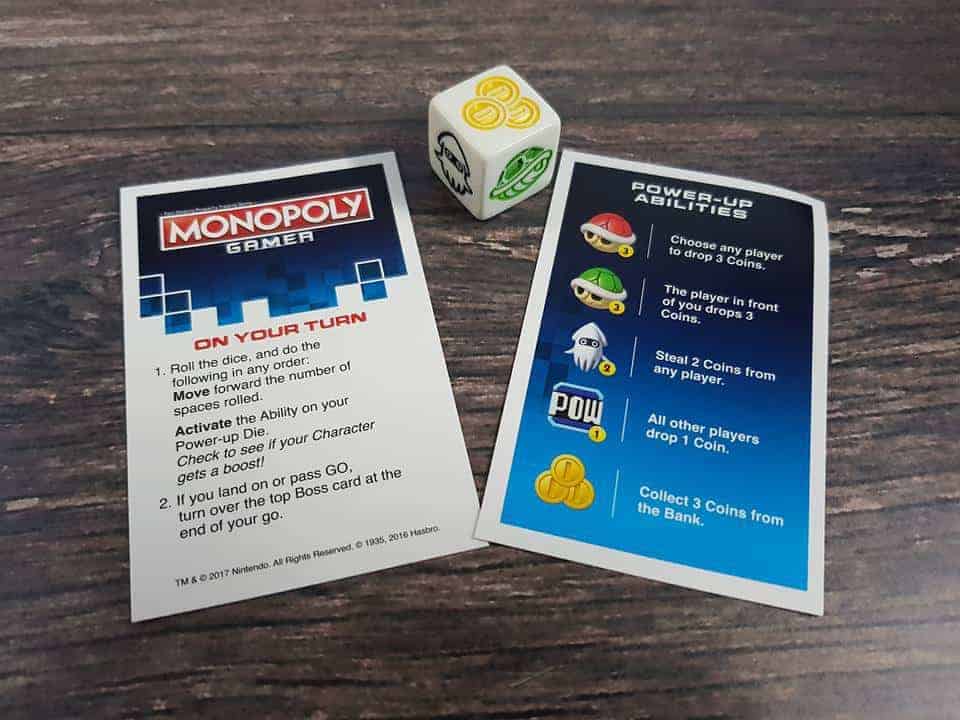 The aim of Monopoly Gamer is to earn points by collecting coins, buying property and beating the various bosses. The winner with the most points at the end wins. 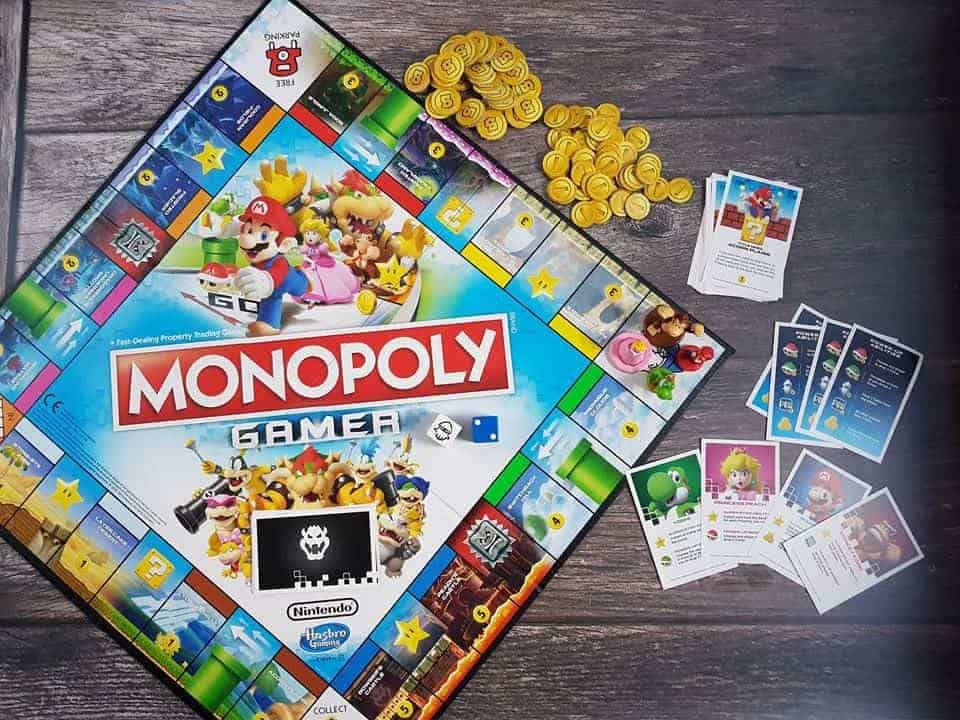 To play you need to roll both dice. First you move your character the number of spaces on the normal dice and follow the instructions on the space such as the warp pipe which moves you forward or the coin block where you collect more coins. The board also features the standard Go to Jail spaces and the pass Go space. If you land on a property you must purchase it or put it up for auction which gives all players the chance to buy it by bidding the most. If you land on a square that is owned by someone else then you must pay them the rent shown on the title deed card. 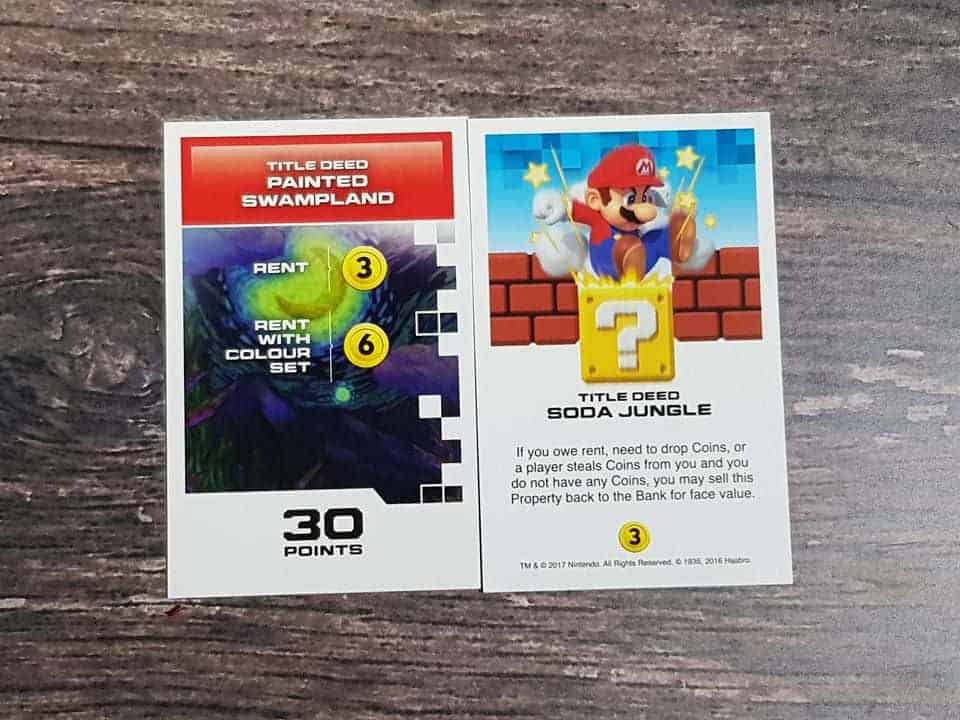 If during your turn you land on or pass Go hen you must start a boss fight by turning over the top Boss card. 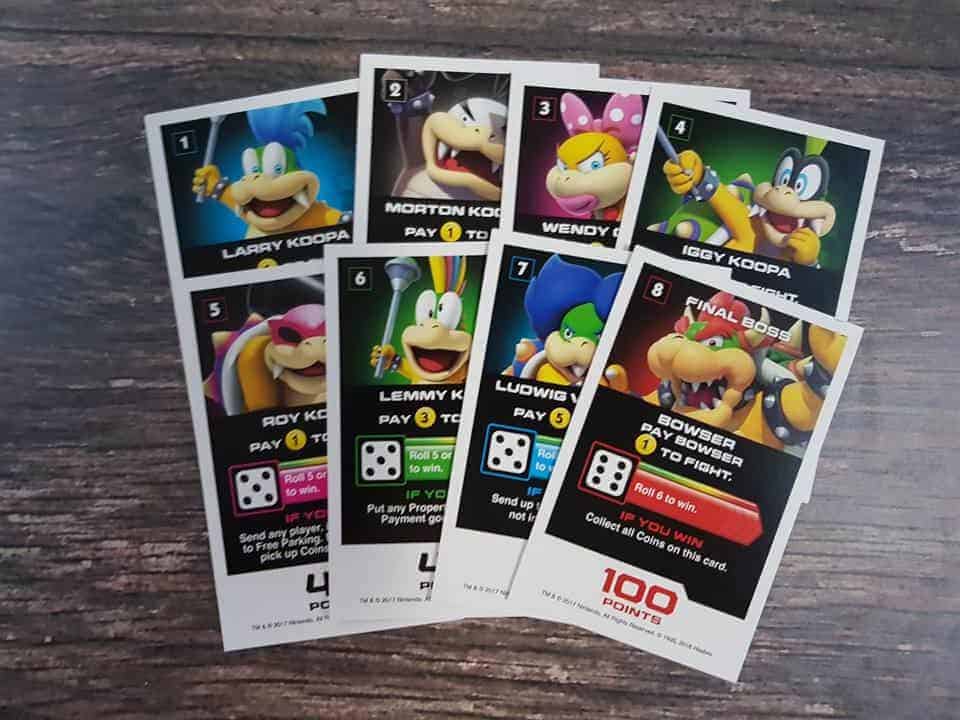 There are 8 bosses in total and these are placed on the board in numerical order so that you finish with Bowser. To fight the boss you need to pay a fight fee and then roll the number on the card to win. You can pass on the opportunity to fight the boss and then other players can have a turn. If you fight and lose then the other players can also fight with each of you paying the fight fee for every roll. The boss fight ends when all players decide to pass on the fight or the boss is defeated.

There is also a special Party mode which will be good if you collect the other characters available. You are able to swap your characters in and out as you play. This is good for 3 to 4 players who all have a large amount of the additional characters collected.

Monopoly Gamer is recommended for children aged 8 plus which I think is about right to enable them to keep track of all of the different components of the game. Game play is a lot quicker than previous versions of Monopoly as the game ends as soon as the final boss is defeated which makes this a fantastic game for the family to play and I can imagine it will be very popular at Christmas and will definitely be a hit with the dads.