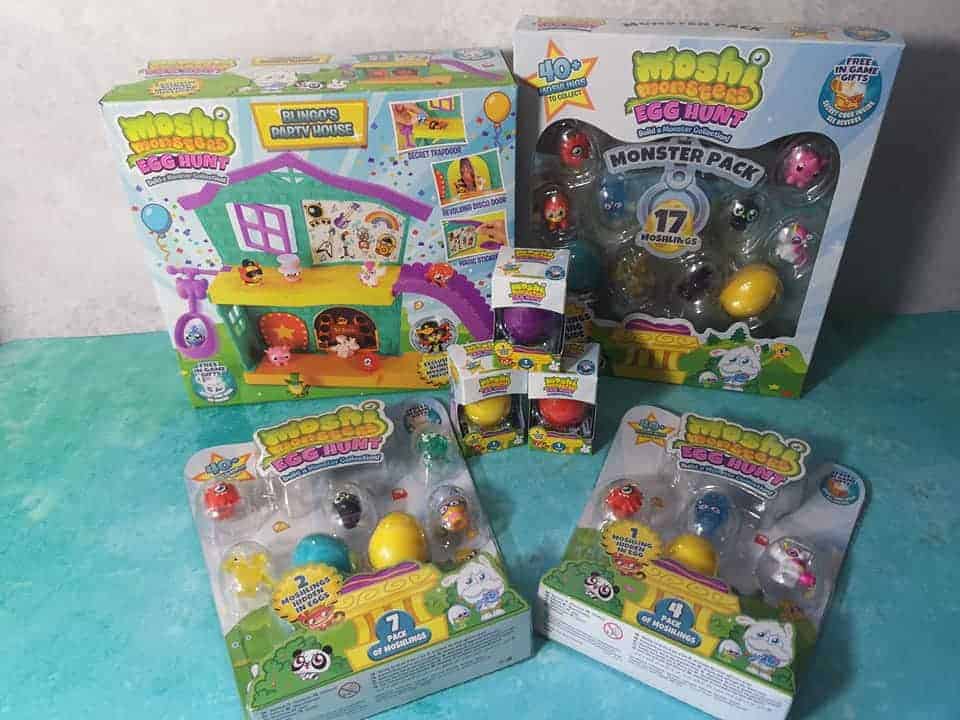 My girls have been fans of Moshi Monsters for years and have been playing the Moshi Monsters Egg Hunt game since we were introduced to it in August 2017 at a press event (check out our Youtube video). With this in mind, I was very excited when I heard that Moshi Monsters toys were having a come back starting.

The new Moshi Monsters Egg Hunt toys come in a range of sizes that make them suitable for any budget and with 40+ moshlings to collect you can swap with your friends as well.

We were sent a selection of the Moshi Monsters Egg Hunt toys including Blingo’s Party House Playset with exclusive Blingo moshling, 7 Pack (2 hidden in eggs), 4 Pack (1 hidden in an egg), Monster Pack which contains 17 moshlings (9 hidden, 2 of which are in eggs) and 3 single packs (each hidden in an egg) 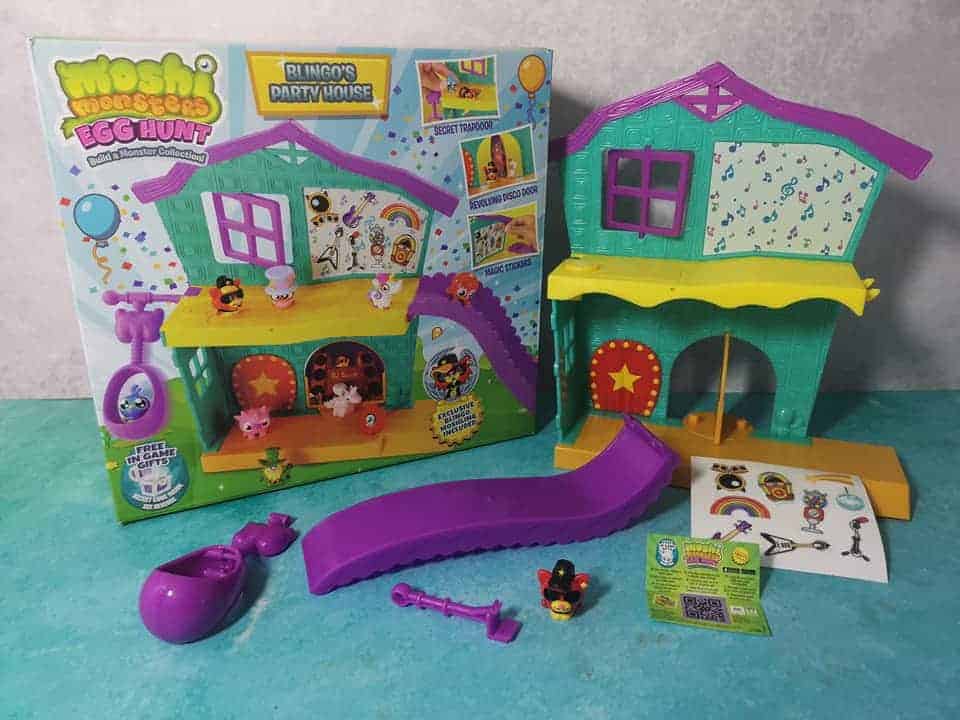 Blingo’s Party House Playset retails at £19.99 and is reminiscent of the houses that feature in the Egg Hunt game. When in its box it does come in a few pieces but these all slot together quickly. 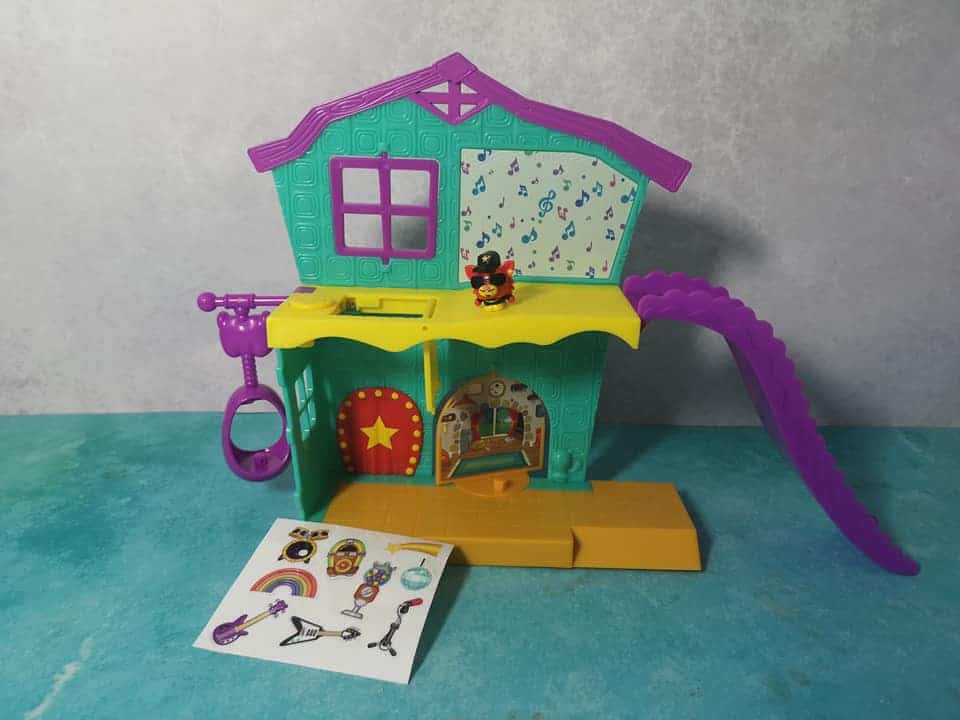 The playset has a few features that are worth noting. First, on the ground floor, there is a spinning wall which shows a living room scene or DJ Quacks night club. On the upper level, there is a trapdoor that is activated by the button to the side with the Moshi symbol on it. On the back wall on the top floor is a reusable sticker surface which allows you to place and move the stickers that are included in the pack. This is very much in line with the game which allows you to do this in your house. There is also a swing to the side of the house that allows you to place a Moshling inside without them falling off.

The various Egg Hunt character packs contain small moshling figures that are available in their classic colours or all in one colour special editions. The plastic eggs are reusable and a great size. The single packs retail at £2.79, 4 pack £6.99, 7 pack £9.99 and 17 pack £19.99 although the bigger items and the playset are currently cheaper at Smyths Toy Superstores. As you can see the 17 pack is really good value in comparison to the single pack and it is a great way to start your collection. 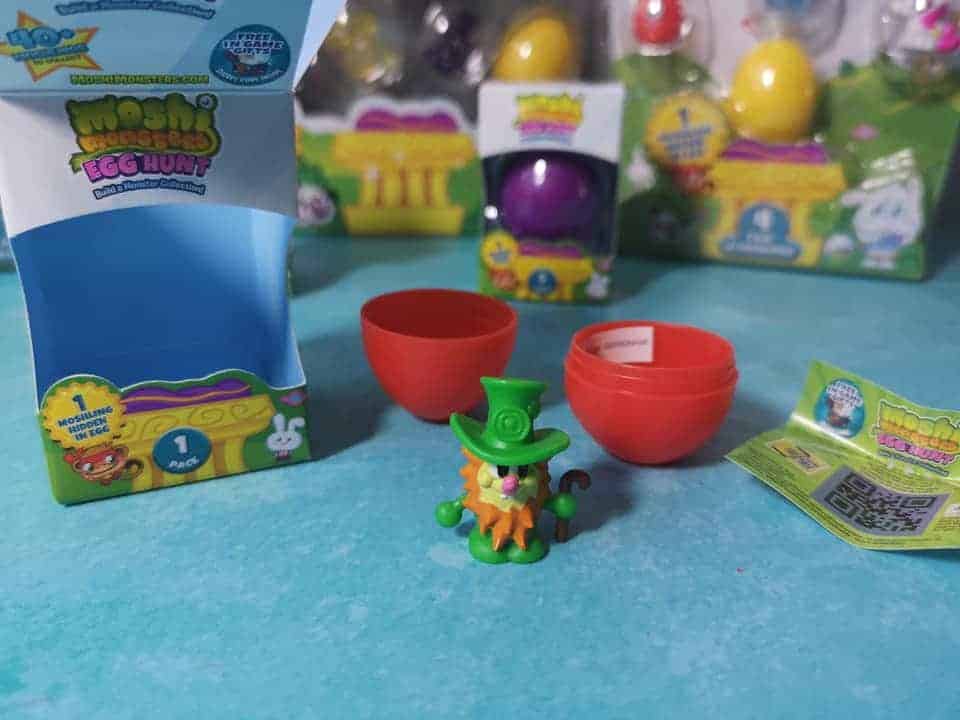 All of the Moshi Monsters Egg Hunt toys come with a QR code that you can scan into the game. This gives lots of added value for kids who play and my girls received lots of rox (the in-game currency), items to decorate their houses and even golden spoons to hatch the super moshling eggs. Blingo’s playset also comes with special items including Blingo’s house in the game.

Our Moshi Monsters Egg Hunt collection is just beginning but I am sure that we will be adding to the collection and I can’t wait for the next series of characters to be released as there are lots more to come.