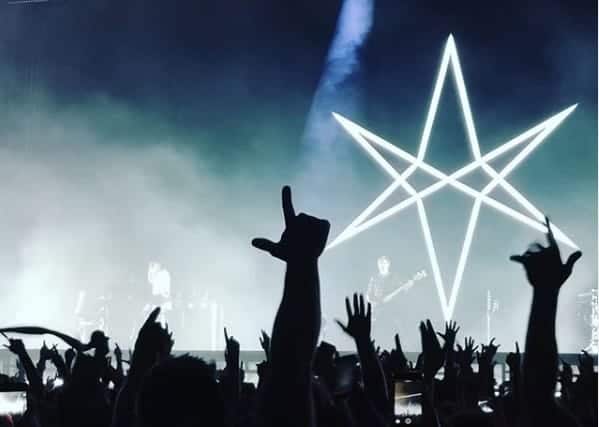 It isn’t often I talk music on my blog but I am over the moon to be able to host this prize draw and offer you the chance to see one of my favourite bands live at All Points East at the end of the month. I have seen Bring Me The Horizon twice over the last year and I loved every single second. Seeing them at Ally Pally in November was just the teaser I needed for the new eclectic album, AMO which was released in January. It was a great set full of old and new songs that had the audience moshing and singing along.

The second gig was really intimate and was an acoustic set with album signing that happened at Church in Sheffield. This was actually one of my all-time favourite gigs. I really got a feel for the band as people as well as enjoying some amazing songs in a new way.

I am really hoping that I will be able to see them at All Points East because Oliver has announced that they will be playing a definitive career-spanning set and will have an amazing line up of support acts across the different stages. The line up really is amazing and I am very jealous of everyone who will be winning tickets to this gig!

Anyway to enter to win one of these pairs of tickets to this gig then fill in the rafflecopter form below and if you want to leave me a comment then tell me which is your favourite Bring Me The Horizon song.

Terms & Conditions ·
The prize is for a pair of tickets to All Points East on 31st May headlined by Bring Me The Horizon. We have 5 prizes to give away.
Prize draw ends at Midnight on 12th May 2019 GMT.
Travel and accommodation are not included.
The prize is non-refundable and no cash alternative will be offered.
The prize is non-transferable. Uk entries only. Entrants must be 18 years or over. Incomplete or Duplicate entries will be deleted. All times are in GMT. Entrants must leave a means of contact via email address. Prizes must be claimed within 5 days, otherwise, another winner will be selected to replace the non-claimant. The prize is the item featured in the post, and there is no cash alternative.