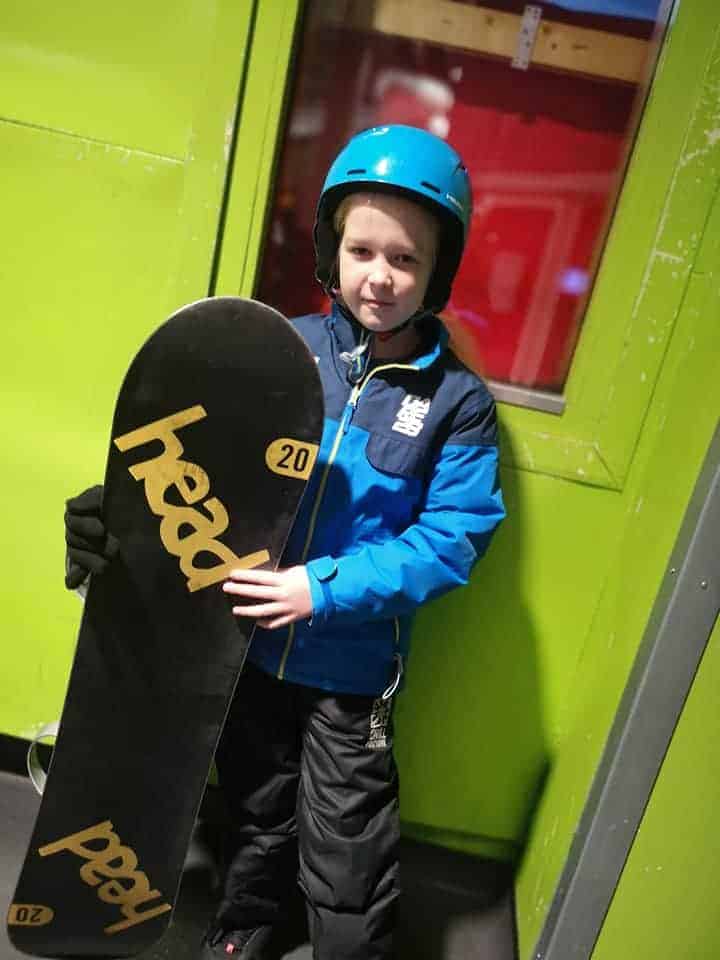 A few weekends ago we spent time as a family at Chill Factore in Manchester learning how to snowboard as part of their Fresh offer where you can take advantage of their FRESH offer where lessons will be £89 during April and May (usually £120 off peak and £150 peak).

We didn’t pay for the lessons as they gifted them to us so that we could experience the lessons for ourselves and share our experience with you. For £89 you get the lessons and equipment hire including boots, snowboard and helmet although you will also need waterproofs (jacket and trousers available to hire) and gloves.

Lessons can be taken over one day, two days or three weeks. We were booked on to the two-day lessons where we were booked in for 3 hours each day over two consecutive days. You actually spend around 5 hours there each day by the time you arrive early to get all of your equipment sorted and have a lunch break.

On our first day, we were taught all about the board before we got strapped in. The first time down the learning slope we did this with just one foot strapped in and I found this fairly easy. The ability to use the foot not strapped in lured me in with a false sense of security that soon vanished with my second foot was attached to the board. 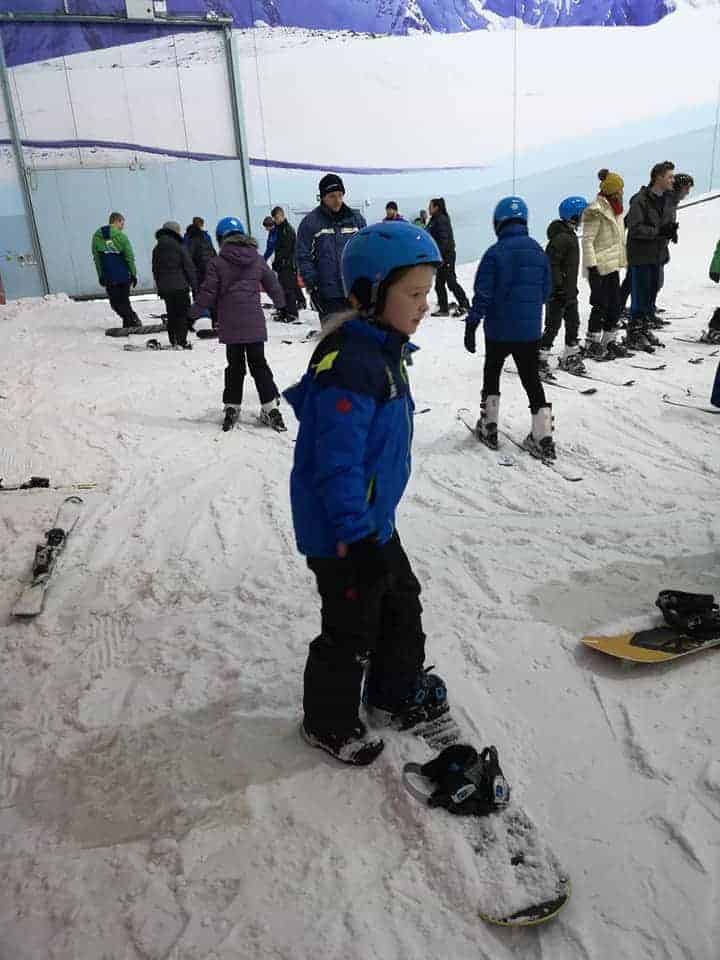 I was amazed at how quickly we went from never having strapped a snowboard on our feet to being at the top of the slope ready to go down with both feet strapped in. However, it didn’t feel rushed. The way we were taught just made it seem like a natural progression and it came naturally to some of us. 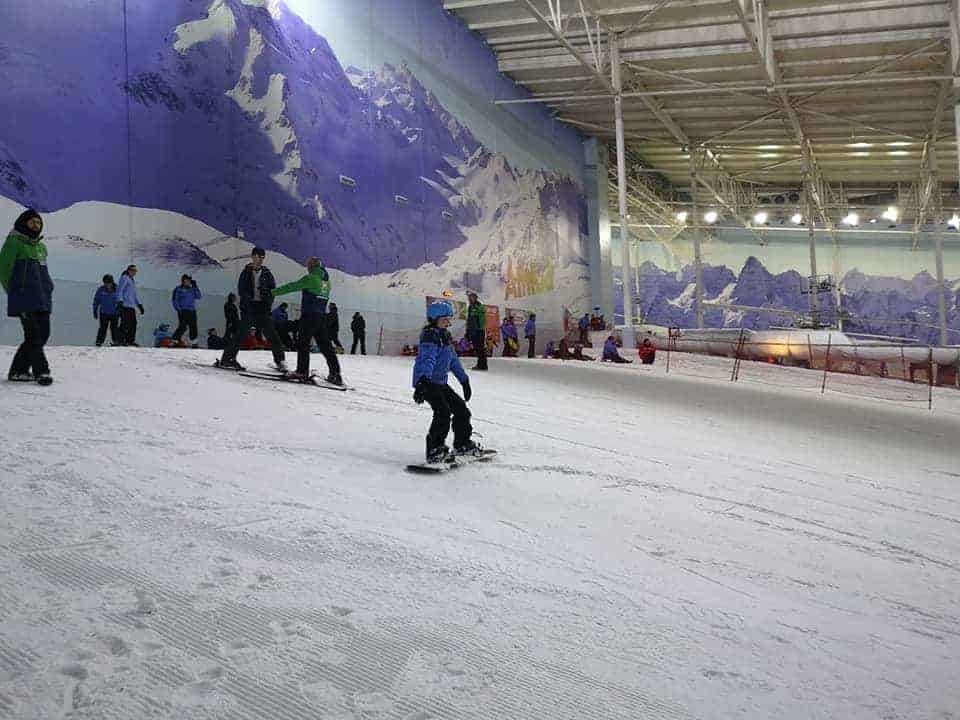 Now snowboarding didn’t come naturally to me but to be fair no activity that requires balance comes naturally to me. As Adam and the girls glided (almost) gracefully down the slope I waved my arms around for balance like I was learning to swim. I did worry at times that my lack of any talent would be an issue for our group of 9 beginners but we were all starting from scratch and although some picked up the skills quicker than others the instructor was able to give us one on one pointers. He then allowed those who had grasped the technique to keep practising whilst helping the less coordinated. After learning how to go down forwards we had a break for lunch before returning for a quick recap and then adding in the use of our arms for direction. 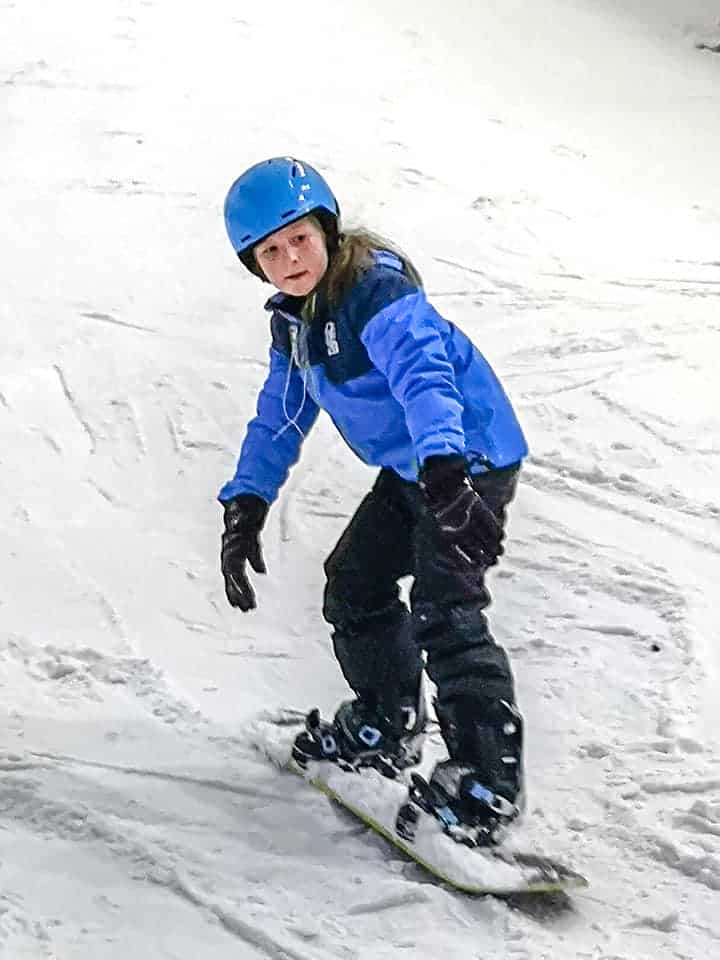 I have to admit that my legs were beginning to complain at this unusual amount of activity but I was absolutely buzzing and although my bottom was a little bit sore from all the falling over I had done on my first few times going down the slope I had finally grasped the basics.  Our instructor was so patient with me and I really appreciated that as both my kids were happily zipping down the slope ahead of me.

Next up was learning to go backwards and after we each went down one by one with the instructor we then moved on to practising this new skill. Going backwards felt so alien as you can’t look where you are going but the actual leg/feet movements felt more natural. Unfortunately, it was at this moment that disaster struck and my eldest grew a little too confident in her abilities. Whilst the instructor was guiding one of the other students down the slope she set off by herself and half way down she fell over backwards landing awkwardly on her arm. The staff were brilliant and I was soon tucked away in first aid with her whilst the lesson continued. With a suspected fracture it was off to the hospital for an x-ray but as the first days lesson was very nearly finished and she wasn’t in too much pain we waited for Adam and Alison who were just learning to steer whilst coming down backwards. 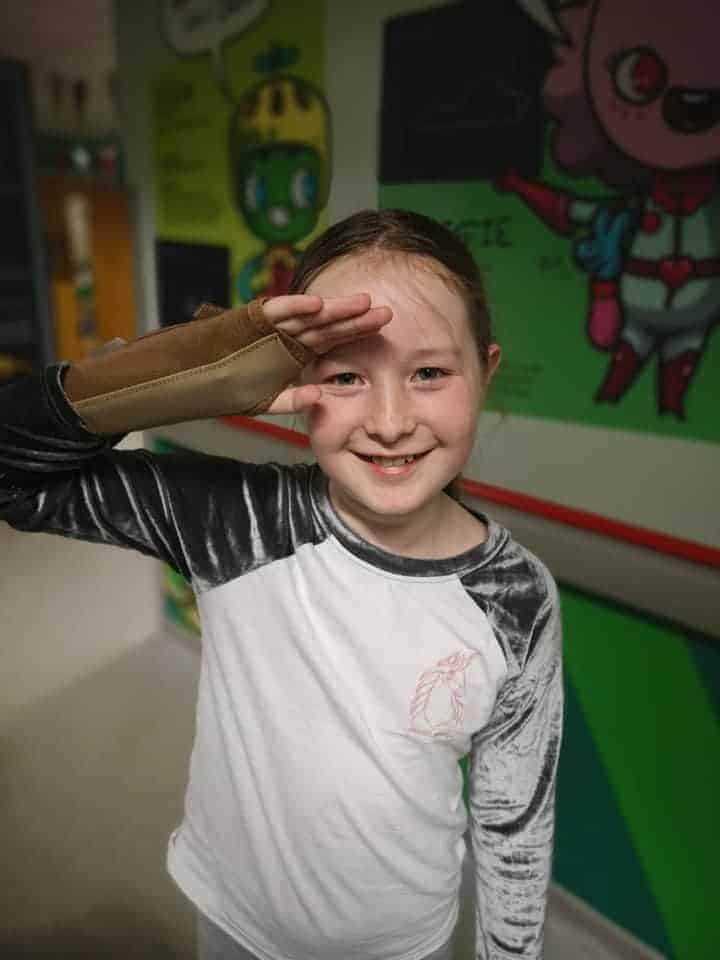 The doctor at the hospital confirmed that Elizabeth had indeed got a buckle fracture in her arm and that he had actually done the same when learning to ski. It has not put her off the idea though and she can’t wait to get the all clear and continue her lessons.

We headed back to Chill Factore for day two of the learn to snowboard lessons although this time with a lot less pupils. As Elizabeth was unable to take part and Adam definitely has more skill on the snowboard than he does the video camera I stayed off the snow with her. Alison also opted to not take part without us, she is only 9 years old and I think the two-day lessons are definitely better suited to older students. She absolutely loved learning but she was exhausted and aching so took full advantage of not having to take part in day two. The staff at Chill Factore were amazing though and did allow her to spend an hour playing in the snow park instead which she absolutely loved. If your kids are 12 or under I would suggest you look at the three-week cause which allows them to rest more in between each lesson. 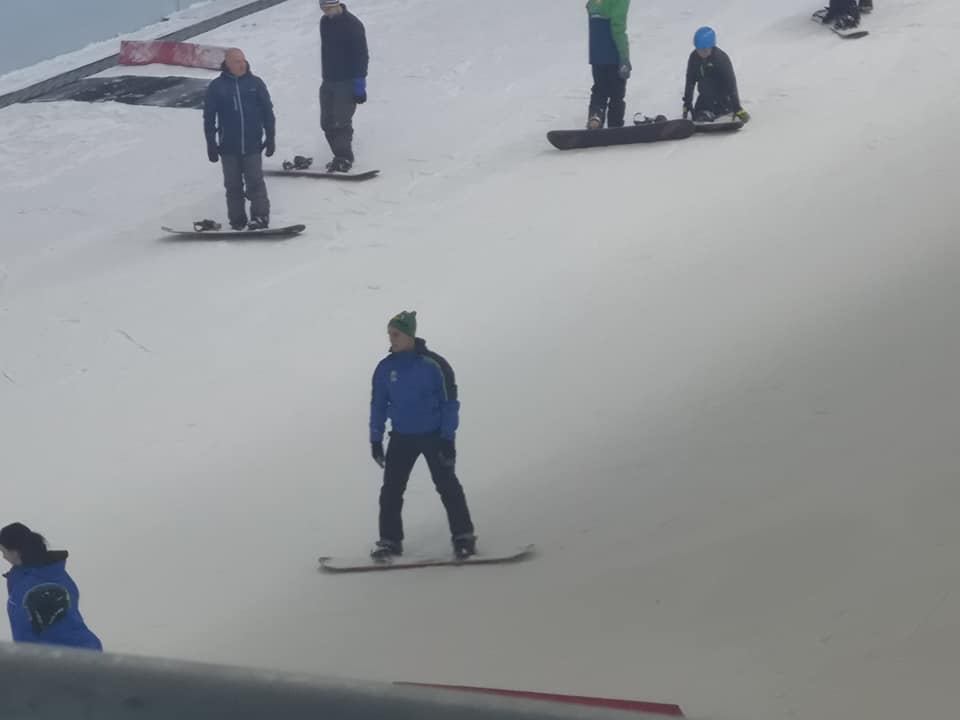 Adam headed back to the slopes with his snowboard and after a quick refresher with a different instructor, he soon became steadier on his feet. Watching back the video that I made over the two days I am actually amazed at the level of skill that he was able to acquire in such a short space of time and he has already shown an interest in returning to Chill Factore to improve. 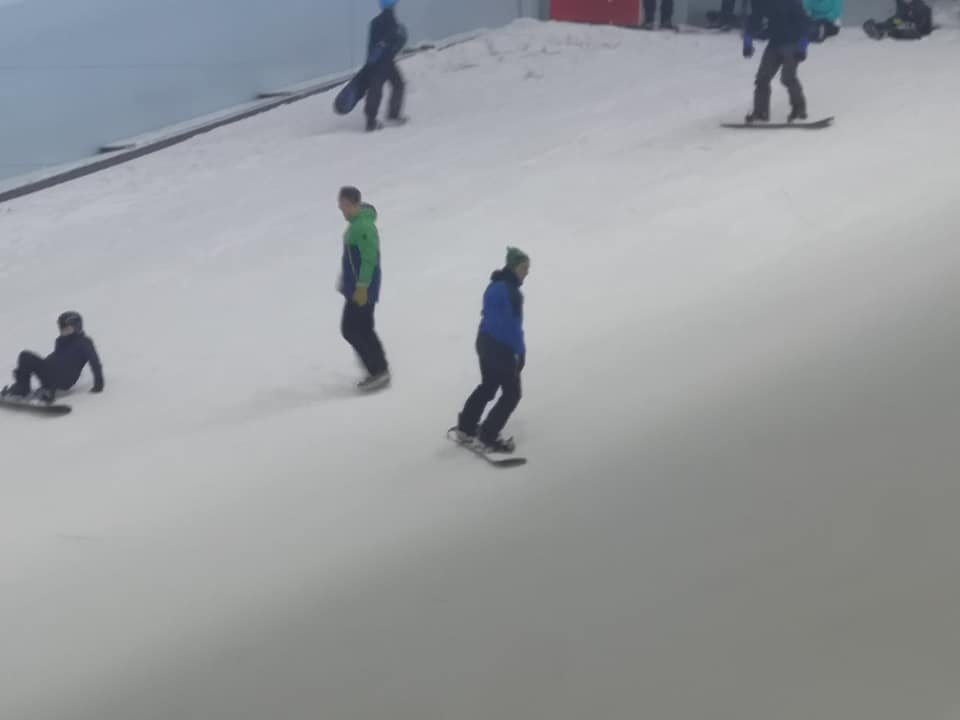 As for us, when Elizabeth is all healed up we will be putting on our waterproofs and getting back on our snowboards because we had an amazing time learning this new skill and I want to get as good as the snowboarders we were watching coming down the big slope which is the longest in the UK.